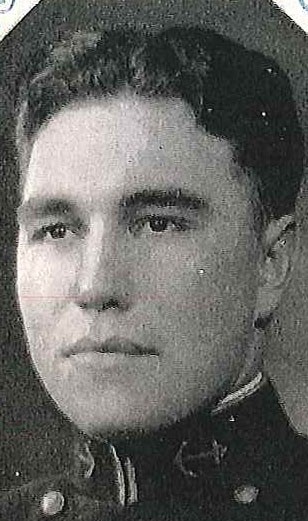 Ernest Edwin Evans was born on August 13, 1908, in Pawnee, Oklahoma. He was graduated from Central High School in Muskogee, Oklahoma, and on May 29, 1926, enlisted in the U.S. Navy. After a years’ service as an enlisted man, he was appointed to the U.S. Naval Academy, Annapolis, Maryland, from the Navy at large and entered as a midshipman on June 29, 1927. He was graduated with the degree of Bachelor of Science and commissioned ensign in the U.S. Navy in June 1931, and by subsequent promotion attained the rank of commander to date from November 1, 1942.

After graduation from the Naval Academy in June 1931, he was assigned to the Naval Air Station, San Diego, California, for a year, and thereafter, until August 7, 1933, served consecutively in USS Colorado, USS Roper and USS Rathburne. After service at the Naval Air Station, Pensacola, Florida, he joined USS Pensacola, and six months later become aviation gunnery observer of that cruiser’s Scouting Squadron NINE. He served in that capacity until April 15, 1937, then continued sea duty for four years, serving successively in USS Chaumont, USS Cahokia and USS Black Hawk.

On August 9, 1941 he joined USS Alden, and was serving in that destroyer at the outbreak of World War II in December of that year. He assumed command of the Alden on March 14, 1942, and continued as her commanding officer until July 7, 1943. He was then ordered to duty in charge of fitting out USS Johnston at the Seattle-Tacoma Shipbuilding Corporation, Seattle, Washington. Assuming command of Johnston at her commissioning, October 27, 1943, he commanded her during her entire service, being on board when she sunk on October 25, 1944, during the Battle for Leyte Gulf in the Philippine Sea.

He was awarded the Bronze Star with Combat “V,” for “meritorious achievement as commanding officer of the USS Johnston in action against an enemy Japanese submarine on May 16, 1944…” The citation further states:

"Participating in a search and attack mission, Commander Evans skillfully maneuvered his ship into position to gain sound contract and delivered a vigorous depth-charge attack. Quickly regaining contact, he again dropped his depth charges which resulted in a heavy underwater ripple explosion heard five minutes after the last detonation with the appearance later of debris and a heavy oil slick in the vicinity as evidence of the probable sinking of the enemy... Commander Evans' persistent tactics and his effective coordination with the assisting ships of the search and attack group were contributing factors in the success of a vital mission and in keeping with the highest traditions of the US Naval Service.”

During the Battle for Leyte Gulf, October 24-26, 1944, Johnston formed a part of the screen for escort aircraft carriers of the SEVENTH Fleet which, on October 25, encountered off Samar the center force of the Japanese fleet after it had transited San Bernardino Strait during the night of October 24-25. Johnston waged a gallant fight against heavy Japanese fleet units but was sunk by the enemy ships. Commander Evans was awarded the Navy Cross, later recalled and replaced by the Medal of Honor, awarded by Congress. The citation which accompanied the Medal of Honor follows:

“For conspicuous gallantry and intrepidity at the risk of his life above and beyond the call of duty as Commanding Officer of USS Johnston, in action against major units of the enemy Japanese Fleet during the Battle of Samar on October 25,1944. The first to lay a smoke screen and to open fire as an enemy task force vastly superior in number, firepower and armor rapidly approached, Commander Evans gallantly diverted the powerful blasts of hostile guns from the lightly armed and armored carriers under his protection, launching the first torpedo attack when Johnston came under straddling Japanese shellfire. Undaunted by damage sustained under the terrific volume of fire, he unhesitatingly joined others of his group to provide fire support during subsequent torpedo attacks against the Japanese and, outstanding and outmaneuvering the enemy as he consistently interposed his vessel between the hostile Fleet units and our carriers despite the crippling loss of engine power and communication with steering aft, shifted command to the fantail, shouted steering orders through an open hatch to men turning the rudder by hand and battled furiously until the Johnston burning and shuddering from a mortal blow, lay dead in the water after three hours of fierce combat. Seriously wounded early in the engagement, Commander Evans, by his indomitable courage and brilliant professional skill, aided materially in turning back the enemy during a critical phase of the action. His valiant fighting spirit throughout his historic battle will endure as an inspiration to all who served with him.”

After the loss of the Johnston, Commander Evans was reported “missing in action.” Subsequently he was declared to have lost his life in this action. He was posthumously awarded the Purple Heart, and was entitled to the Ribbon for the Presidential Unit Citation awarded Pacific Fleet Task Unit 77.4.4, of which Johnston was a unit, for extraordinary heroism on October 25, 1944.

In addition to the Medal of Honor, the Bronze Star, Purple Heart, and Presidential Unit Citation Ribbon, Commander Evans had the China Service Medal, American Defense Service Medal, Fleet Clasp, and was entitled to the Asiatic-Pacific Campaign Medal with six engagement stars, the World War II Victory Medal, and the Philippine Defense and Liberation Ribbons with the one star.

A destroyer escort vessel, USS Evans (DE-1023), was named in honor of Commander Evans. Mrs. Hugh Hendrickson of Tulsa, Oklahoma, sister to Commander Evans, sponsored the vessel at the launching at the Puget Sound Bridge and Dredging Company, Seattle, Washington, on September 14, 1955.