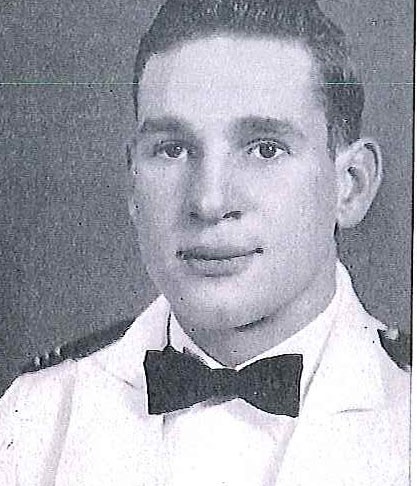 William Henry Deibler, Jr., was born in Sunbury, Pennsylvania, on February 21, 1919, son of William H. and Mildred Edwina (Boyer) Deibler. He attended Selinagrove, Pennsylvania, High School and Cochran-Bryan Preparatory School prior to entering the US Naval Academy, Annapolis, Maryland, as a Midshipman from Pennsylvania on June 23, 1928. He was graduated with the Class of 1942 and commissioned Ensign on December 19, 1941 (accelerated course due to war), and subsequently advanced to the rank of Lieutenant Commander, USN in which rank he resigned in 1947. Commissioned in the US Naval Reserve, he was promoted to the rank of Commander to date from July 1, 1954.

After graduation from the Naval Academy in December 1941, just after the outbreak of World War II, he was assigned to USS Cole (DD-155), in which he served as Engineer Officer, and briefly as Gunnery Officer during the year 1942. He is entitled to the Ribbon for, and facsimile of the Presidential Unit Citation awarded the USS Cole for heroic service on November 8, 1942, at Safi, French Morocco, and was personally awarded the Silver Star Medal, with citation as follows:

“For conspicuous gallantry and intrepidity while serving as Engineer Officer and later Gunnery Officer of the USS Cole, during the assault on and occupation of French Morocco from November 8 to 11, 1942. When the Cole entered the harbor of Safi under cover of darkness to land Army assault troops Lieutenant (junior grade) Deibler, although stationed in a position exposed to hostile fire, performed the duties of Gunnery Officer with exceptional skill and initiative. As a result of his previous excellent organizational and executive ability, the engineering department operated zealously and with a high degree of efficiency during the entire campaign…”

He assisted in fitting out USS Walker (DD-517) early in 1943, and served on board that destroyer from her commissioning in April of that year until December 1945, throughout the remaining period of the war, first as Engineer Officer, and from June 1944 as Executive Officer. “For meritorious service as Executive Officer of the USS Walker, during operations against enemy Japanese forces in the Pacific War Area from March 17 to May 2, 1945…” he was awarded the Bronze Star Medal with Combat “V.” The citation further states:

“Acting as Combat Information Center Evaluator, Lieutenant Deibler skillfully carried out his assigned duties during numerous hostile air attacks and the bombardment of enemy territory and thereby contributed materially to the success of his ship in the destruction of Japanese aircraft and shore installations…”

From January through June 1946 he served as Commanding Officer of USS Erben (DD-631), after which he was transferred to USS Johnston (DD-821) for fitting out duty. He served as Executive Officer of that destroyer from her commissioning in August 1946 until February 1947, after which his resignation from the US Navy was accepted.

Called into active service as a Naval Reserve Officer, he was a student at the Armed Forces Staff College, Norfolk, Virginia, from August 1950 until January 1951, and from February through May of that year served as Operations Officer on the Staff of Commander Destroyer Squadron 16, which operated in the Korea Area under United Nations Command, He received a Letter of Commendation, with Ribbon and Combat “V,” for meritorious service “as Plans, Operations, Gunnery and Intelligence Officer on the Staff of Commander Destroyer Squadron 16, on USS English (DD-696), during the period 14 February 1951 to 12 May 1951…” The commendation, from COMNAVFE, further states:

“Lieutenant Commander Deibler, by planning, analysis and evaluation of intelligence information, and a knowledge of the characteristics and capabilities of ships, formulated operational schedules, plans, and orders with such thoroughness and completeness that the tasks assigned to Destroyer Squadron 16, Task Group 92.2 and Task Element 95.21 were carried out in an outstanding manner…(and) contributed materially to the effectiveness of operations against the enemy…”

In June 1951 he joined USS Robert L. Wilson (DD-847) as Executive Officer, and after a year’s service in that destroyer, part of which time she was deployed in the European Area on occupation duty, he was detached for duty at the University of Illinois, Urbana, Illinois. There he served until June 1954 as Executive Officer of the Naval Reserve Officers Training Corps Unit and as Associate Professor of Naval Science. From August 1954 until August 1956 he served as Training Officer on the Staff of the Chief of the Joint US Military Aid Group, Greece, at Athens.

He next served as Executive Officer of USS Bexar (APA-237), and under orders of June 2, 1958, now serves as Commanding Officer of USS Rehoboth (AGS-50).

Commander Deibler is a Registered Professional Engineer (Mechanical) in the State of Pennsylvania. In civil life he is Industrial Representative for the Pennsylvania Power and Light Company, at Harrisburg, Pennsylvania.