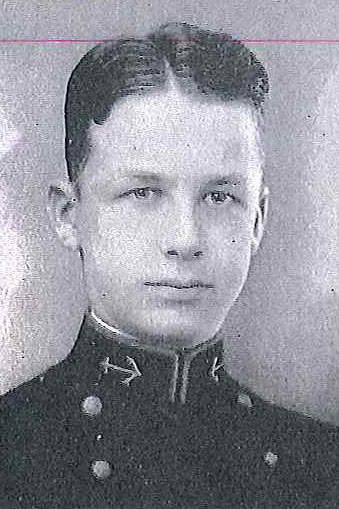 James Shadel Bierer was born on October 17, 1907, in Kansas City, Missouri, son of the late Captain Bion B. Bierer, USN, and Mrs. Bessie (Roberts) Bierer. He attended Western High School and the Columbian Preparatory School (Schadman’s), born in Washington, DC, before his appointment, at large, to the US Naval Academy, Annapolis, Maryland, in 1924. As a Midshipman he participated in soccer and lacrosse. Gradu- Graduated and commissioned Ensign in the Supply Corps of the US Navy on June 7, 1928, he subsequently attained the rank of Captain to date from March 25, 1948.

Following graduation from the Naval Academy in 1928, he joined USS Utah as Assistant to the Supply Officer. While he was aboard that battleship she made the trip to Montevideo, Uruguay, and Rio de Janeiro, Brazil, to return President Herbert Hoover to the United States. In August 1929 he transferred to USS Vestal, and served as Disbursing Officer of that vessel until June 1931, when he reported as Assistant to the Supply Officer at the Navy Yard, Boston, Massachusetts. Between September 1932 and June 1934 he had instruction at the Graduate School of Business Administration, Harvard University, Cambridge, Massachusetts.

Completing an assignment as Disbursing Officer on the staff of Commander Destroyer Division TWO, USS Upshur flagship, he returned to the United States in February 1937 for duty in connection with reserve personnel and purchase matters in the Bureau of Supplies and Accounts, Navy Department, Washington, DC. He remained there until September 1939, when he joined USS Philadelphia, as Supply and Disbursing Officer. He was aboard that cruiser, operating on neutrality patrol, when the United States declared war on the Axis Power, December 8, 1941, and she subsequently was engaged in convoy duty in the North Atlantic.

Following logistic duty on the staff of the Naval War College, Newport, Rhode Island, he was assigned in March 1948 to the Bureau of Supplies and Accounts, Navy Department. He is now under orders to report as Executive Officer of the Naval Supply Center, Oakland, California.