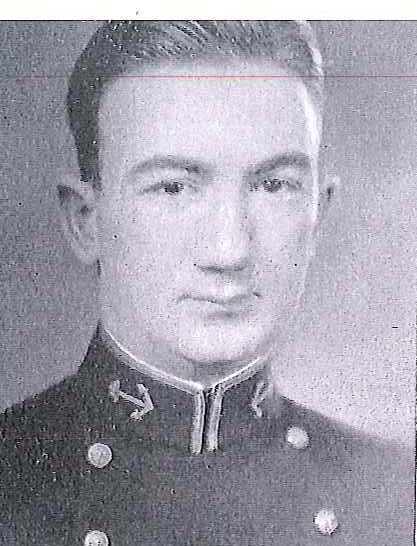 James Voigt Bewick was born in Kansas City, Missouri, on June 25, 1910, son of Stephenson Pope and Rosa Voigt Bewick. He attended Columbia (Missouri) High School, Missouri State University (for one term) and the US Hall Preparatory School in Columbia, before his appointment to the US Naval Academy, Annapolis, Maryland, from his native state in 1929. As a Midshipman he played varsity soccer for four years, receiving his “N.” Graduated and commissioned Ensign on June 1, 1933, he subsequently attained the rank of Commander, to date from January 1, 1944.

Following graduation in 1933, he joined USS Marblehead and in March 1934 was ordered to the Navy Yard, Puget Sound, Washington, where USS Astoria was building. He reported aboard as First Lieutenant upon the commissioning of that cruiser, April 28, 1934, and in May 1938 transferred to USS Flusser to serve as Torpedo Officer and First Lieutenant. From June 1939 to July 1940 he had duty in connection with the development of high speed minesweeping gear aboard USS Lamberton. He continued sea service until June 1941 as Engineering Officer of USS West Virginia.

He was on duty as an Instructor in the Department of Ordnance and Gunnery at the Naval Academy, upon the Untied States’ entry into World War II, and remained in that capacity until July 1943. Following an assignment at the Submarine Training Center, Miami, Florida, he was in charge of fitting out USS Loy at the Navy Yard, Norfolk, Virginia. The Loy was commissioned on September 12, 1943, and he assumed command. Relieved of command of that destroyer escort in February 1944, he reported the next month as Commander Destroyer Escort Division SIXTY-THREE.

“For exceptionally meritorious conduct…(in that assignment) from October 18 to 29, 1944…” he was awarded the Legion of Merit, with Combat “V.” The citation further states: “…Commander Bewick displayed exceptional ability in organizing and training personnel in ships of his command and maintained his division at the peak of efficiency during aggressive attacks against an overwhelming force of enemy warships. His sound judgment, cool courage and conscientious devotion to duty were important factors in the infliction of extensive damage upon the enemy…”

He had a month’s assignment at the Naval Training Station, Newport, Rhode Island, before reporting, in January 1946, for duty in connection with the fitting out of USS Bausell at the Bath (Maine) Iron Works. He commanded that destroyer from her commissioning on February 7, 1946, until January 1947 when he joined the staff of Commander Destroyer Flotilla THREE as Operations Officer. He served as such until June 1947, after which he completed the Senior Course at the Naval War College, Newport, Rhode Island.

Between June and August 1948 he was assigned to the Seventh Naval District Headquarters, Jacksonville, Florida, followed by duty at Headquarters, Sixth Naval District, Charleston, South Carolina. He remained there until May 1950, when he was ordered to Tutuila, American Samoa, where he served until February 1951 as Assistant to the Governor and for the last four months as Commanding Officer of the Naval forces there.

In September 1951 he returned to the United States for duty at Headquarters, Potomac River Naval Command, Washington, DC, where he is presently serving.