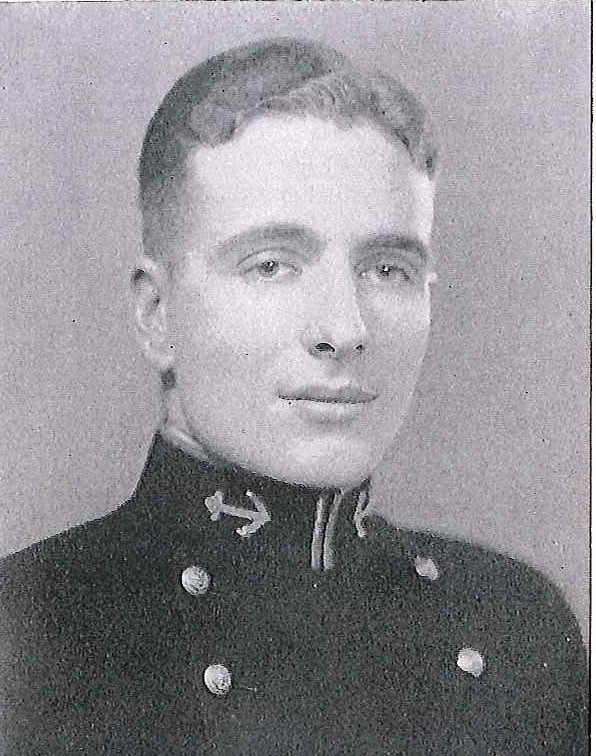 Donald Temple Eller was born in Washington, DC, on June 28, 1906, son of Wayne M. and Mary (Temple) Eller. He was graduated from Petersburg, Virginia, High School in February 1925 and that year was appointed to the US Naval Academy by Congressman Patrick Henry Drewry of Petersburg. Graduated and commissioned Ensign on June 6, 1929, he subsequently advanced to the rank of Rear Admiral, to date from August 1, 1956.

After graduation from the Naval Academy in June 1929, he has communications duty in the battleship Wyoming until March 1930, then served as a division officer in the cruiser Rochester, operating for a year with Special Service Squadron in Panama, and later operating in China with the Asiatic Fleet. He remained on Asiatic Station, with duty as Torpedo Office of the destroyer Pope, from June 1932 until June 1934. For a year he served as Gunnery Officer in USS King, a destroyer of the Battle Force, after which he had division duty in USS Utah, a radio-controlled target ship, in which he attended Gunnery School.

In 1936 he was selected for the General Line course at the Postgraduate School, Annapolis, and had further instruction at the Marine Corps Schools, Quantico, Virginia. From June 1938 until April 1941 he served a Gunnery Officer of USS Smith, a Battle Force destroyer, later operating with the Hawaiian Detachment. He was transferred to USS Wainwright in April 1941 to serve as Gunnery and Operations Officer on the Staff of Commander Destroyer Squadron EIGHT, on Murmansk convoy duty, the first American unit to join the British Fleet in World War II. At the outbreak of war in the Pacific his squadron was entering the bay at Cape Town, South Africa, and took part in the Casablanca landing.

While serving from February 1943 to June 1944 as Commanding Officer of USS Burns (DD 588), a unit of Task Force FIFTY-EIGHT, he participated in the invasion of Gilbert Islands, in operations in the Marshall Islands and Marianas Islands areas, and in New Guinea operations. He was awarded the Navy Cross and received a Letter of Commendation with Ribbon and Combat “V,” from the Commander in Chief, Pacific Fleet, the citations following in Part:

NAVY CROSS: “For extraordinary heroism as Commanding Officer of USS Burns during a War Patrol of that vessel in enemy Japanese-controlled waters. Skillfully maneuvering his vessel to strike at enemy shipping, Captain (then Commander) Eller launched a bold, aggressive attack in the face of heavy and persistent hostile countermeasures, to sink an entire Japanese convoy including one tanker, one supply ship and two smaller craft. . .”

Letter of Commendation: “For distinguishing himself by meritorious Achievement as Commanding Officer of a United States destroyer in Central Pacific waters in connection with operations against the enemy. Duringthis period his ship participated in carrier strikes on the Marianas and Bonin Islands; contributed substantially to the rescue of our aviators after an air attack on important units of the enemy fleet, and assisted in bombardment of the Bonin Islands. His alertness and professional skill contributed materially to the success of these operations. . .”

He returned to the United States in June 1944, and for three years thereafter served as Officer in Charge, Advanced Technical Service Schools, Washington, DC He was Division Commander of Destroyer Division SEVENTY-TWO from June 1947 until June 1948, and for four months during that period also commanded Destroyer Squadron SEVEN. He then reported as Assistant Chief of Staff for Administration, to Commander in Chief, Atlantic Fleet, serving under Admirals Blandy and Fechteler during the period ending in June 1951. In the year to follow he was a student at the National War College, Washington, DC.

He again had duty in the Pacific as Commanding Officer of USS Cavalier (APA-37) from June 1952 until June 1953, after which he was ordered to the Navy Department, for a tour of duty in the Officer of the Chief of Naval Operations (Naval Intelligence). On October 24, 1955 he assumed command of Destroyer Squadron SIX, and in August 1956 became Commander Destroyer Flotilla SIX. He was Commander Military Sea Transportation Service, Atlantic Area, with headquarters in New York, New York, from November 1957 until January 1960, then served as Commander Naval Reserve Training Command, Omaha, Nebraska. In September 1961 he reported as Deputy Chief of Staff to the Commander in Chief, Allied Forced, Southern Europe and for “exceptionally meritortious conduct. . .(in that capacity) from September 17 ,1961 to April 15, 1964. . .” he was awarded the Legion of Merit. The citation further states:

“Confronted with a myriad of challenging, complicated and extraordinary problems, both operational and administrative, evolving from the tactical and support requirements of the joint six-nation force which comprises the Southern Region of the North Atlantic Treaty Organization, Rear Admiral Eller, through his outstanding professional competence, perseverance, and diplomacy, successfully overcame all major obstacles to insure for Allied Forces Southern Europe the most productive logistical and administrative resources and systems obtained to supports the operational commitments of the Command. Under his skillful supervision and direction, communications withing the Southern Region were elevated to an enviable standard of efficiency and reliability; a wide variety of vital infrastructure facilities were constructed; fully operational alternate command and control facilities were created; financial and budgetary procedures and safeguards were instituted to guarantee for the Command the maximum obtainable funds to support missions and functions; and the lagging personnel posture of the Command was greatly improved. By his dynamic leadership, astutude executive ability and brilliant execution of self-conceived plans, Rear Admiral Eller contributed very significantly to the strengthening of Allied forces Southern Europe. . .”

He had brief duty in the Potomac River Naval Command, headquartered in Washington, DC, from April 1964 until relieved of active duty pending his retirement, effective July 1, 1964.