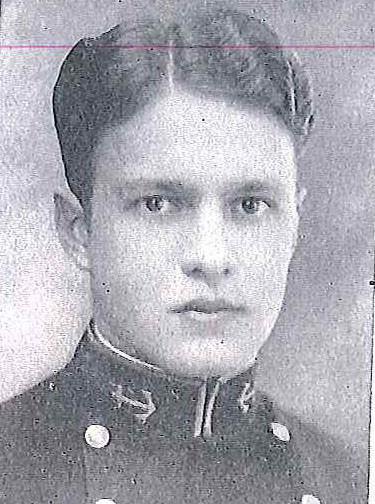 Irwin Forest Beyerly was born in Chillicothe, Ohio, on June 24, 1905, the son of W. J. Beyerly and Mrs. (Artie A. Sigle) Beyerly. He attended the Chillicothe High School before his appointment to the US Naval Academy from the Eleventh District of his native state in 1924. While a midshipman he played Class, Company, and B-Squad football. Graduated and commissioned Ensign on June 7, 1928, he subsequently attained the rank of Captain to date from March 25, 1945.

After graduation in 1928, he served successively in USS Pennsylvania and USS Oklahoma until January 1930 when he reported to the Naval Air Station, Pensacola, Florida, for instruction. From July 1930 until April 1935 he had consecutive duty in USS Henry County, USS Yarnall, USS Alden, USS Avocet, USS Oglala and USS Quail.

He was awarded the Bronze Star Medal and the Distinguished Service Medal for meritorious service while on duty with the US Naval Group in China. The citations follow, in part:

Bronze Star Medal: “For meritorious achievements as Aerological Officer to the United States Naval Observer in China from June 30, 1943 to April 20, 1944. Displaying resourcefulness, initiative and administrative ability in the fulfillment of a difficult assignment, (he) personally training and equipped over 1,000 Chinese radio operators and secret agents as weather observers prior to the establishment of a large and diversified network of weather reporting stations throughout enemy-occupied and unoccupied areas of China…..”

He was also awarded the Army Legion of Merit for “exceptionally meritorious conduct in the performance of outstanding service during the period from September 4, 1945 to November 24, 1945.”