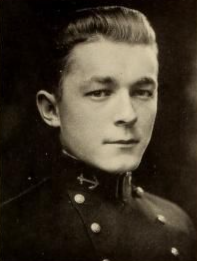 Delbert Strother Cornwell was born in Philippi, West Virginia, on April 16, 1900, son of Austin B. and Sarah Frances (Trahorn) Cornwell. He attended Philippi High School prior to his appointment to the US Naval Academy, Annapolis, Maryland, from the Second District of his native state in 1918. He was graduated and commis­sioned Ensign on June 2, 1922, and through subsequent promotions attained the rank of Rear Admiral to date from March 1, 1950.

Upon graduation from the Naval Academy in 1922, he proceeded to the West Coast, assigned to the USS Idaho operating with Division EIGHT, Battleship Squadron FOUR, Pacific.  Detached from that vessel in July 1924, he reported for flight training at the Naval Air Sta­tion, Pensacola, Florida. He was designated Naval Aviator on March 16, 1925, and in June of that year reported to Commander Aircraft Squadrons, Scouting Fleet. He was subsequently assigned to Torpedo and Bombing Plane Squadron ONE attached to the USS Wright. He con­tinued to serve in that squadron until December 1925, and after brief duty with Observation Plane Squadron SIX, joined the aviation unit of the battleship UTAH. While so serving he was awarded the Distinguished Flying Cross. The citation follows:

“For extraordinary heroism on 18 November 1926, while pilot of plane #6711 in aerial flight in attempting to save the life of his passenger, Lieutenant (jg) Edward B. Curtis, in spite of almost certain death to himself. While maneuvering at an altitude of 2,000 feet, the left wing of the plane collapsed throwing it into a spin. Lieutenant Cornwell gave the word to jump with parachutes, Lieuten­ant Curtis was caught in his seat, and Lieutenant Cornwell, after a vain attempt to free him, returned to his seat and attempted to bring the plane down in a flat spin, or otherwise ease the shock of the fall, rather than leave the plane and its passenger to spin down to sure destruction and death. The plane crashed to a complete wreck resulting in the death of the passenger and the injury of the pilot.”

From June 1932 to June 1935 he served in the Flight Test Sec­tion at the Naval Air Station, Anacostia, DC, after which he re­ported for duty with Observation Squadron TWO, commanding that unit between January and May 1937. Following a year's service as Executive Officer of Patrol Squadron TWELVE-F, he returned to the Naval Air Station, Pensacola, where he remained until April 1940.

He next reported as Operations Officer on the staff of Command­er Patrol Wing TWO, based at Pearl Harbor, Territory of Hawaii, and in November 1940 transferred in a similar capacity, to the staff of Commander Carrier Division ONE. He was so serving when the United States entered World War II on December 8, 1941. “For distinguished service…(in the latter assignment) in preparation for, during and after the successful engagements with the enemy in the Coral Sea on May 7 and 8, 1942…” he received a Letter of Commendation with Ribbon, from the Commander in Chief, US Pacific Fleet.

In August 1942 he assisted in fitting out the USS Nassau at the Navy Yard, Puget Sound, Washington, and joined her as Executive Officer upon her commissioning on August 20, 1942.  Following a brief shakedown cruise, the Nassau proceeded to the South Pacific and landed her aircraft at Espiritu Santo from which point the planes were flown to the support of operations on Guadalcanal. He was detached from the Nassau in February 1943 with orders to the Logistic Plans Division, Office of the Chief of Naval Operations, Navy Department, Washington, DC. Upon the reorganization of that Office in August 1943, he was assigned to the Aviation Plans Section, Air Technical Analysis Division, Office of the Deputy Chief of Naval Operations for Air.

On December 8, 1944 he assumed command of the USS Suwanee at the Navy Yard, Puget Sound, Washington, where she was undergoing repairs for the damage received in the Battle of Leyte Gulf. Under his command, the Suwanee returned to the Pacific Area, and from April 1 to June 16, 1945, participated in the initial landings and occupation of Okinawa and also in the neutralization of the Saki­shima bases. She also took part in the initial landings at Balikpapan, Borneo, June 30 to July 3, 1945, and for outstanding service during these engagements, he was awarded the Legion of Merit with Combat “V,” He is also entitled to the Ribbon for and a fassimile of the Presidential Unit Citation awarded the USS Suwanee. The citation for the Legion of Merit follows in part:

“For exceptionally meritorious conduct…during operations against enemy Japanese forces in the vicinity of Sakishima Gunto and Okinawa from March 30 to June 16, 1945. Operating in hostile areas under the constant threat of enemy air and submarine attacks for a period of 77 days, (he) directed his ship in the infliction of heavy damage on enemy defense installations…”

Relieved of command of the USS Suwanee in September 1945, fol­lowing the capitulation of the Japanese the preceding month, he re­turned to the United States to fit out the USS Philippine Sea. Upon her commissioning on May 11, 1946, he assumed command and continued in that command until July 1947. From August 1947 to June 1948 he had instruction at the National War College, Washington, DC, and upon completion of the course, became a member of the Joint Staff, Joint Chiefs of Staff, Washington, DC. He continued to serve in that capacity until May 1949, when he reported as US Naval Attache and US Naval Attache for Air, London, England.  He served as Commander Carrier Division FIFTEEN from September 1951 to September 1952, after which he served as Commander Fleet Air, Seattle, Washington.