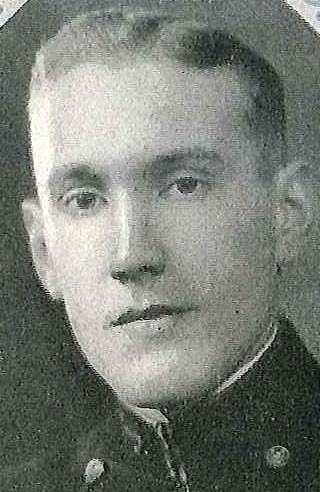 Bruce Lewis Carr was born in Dayton, Ohio, on July 20, 1907, son of Samuel G. and Eilla E. (Shuey) Carr. He attended public schools of Dayton and entered the United States Naval Academy from the Third District of Ohio on June 21, 1927. He was graduated and commissioned Ensign on June 4, 1931, and subsequently advanced in rank to that of Captain, to date from July 1, 1950.

After graduation from the Naval Academy in June 1931, he was assigned to USS Raleigh (CL-7), in which he served as Watch and Junior Division Officer until November 1933. From January to June 1934 he was a student at the Submarine School, New London, Connecticut, and during the next five years he had successive service as Watch and Division Officer of the submarines S-38 and R-4. From May 1939 until May 1941 he served as Assistant Ship Superintendent at the Naval Shipyard, Portsmouth, New Hampshire, after which he assisted in fitting out USS Grenadier (SS-210), building at that yard.

He joined USS Grenadier at her commissioning on May 1, 1941, and was serving as her Executive Officer when the United States entered World War II in December of that year. In May 1942 he assumed command of that submarine, and remained in command for seven months. He was awarded the Silver Star Medal and received two Letters of Commendation (with Ribbon and Star) from the Commander I Chief, US Pacific Fleet. The citation to the Silver Star Medal follows, in part:

“For conspicuous gallantry and intrepidity as Assistant Approach Officer, attached to the USS Grenadier, in action against enemy Japanese forces during her Second War Patrol in enemy-controlled waters from April 12 to June 10, 1942 . . . Lieutenant Carr rendered valuable assistance to his commanding officer during attacks which resulted in the sinking of two enemy ships totaling 24, 400 tons and, in addition, contributed materially to the success of his vessel in evading enemy countermeasures . . .”

Staff duty as Assistant Operations Officer and Flag Secretary on the Staff of Commander Submarines, Southwest Pacific (Task Force 71), from December 1942 until January 1944, was followed by three months’ duty as an instructor at the Submarine Chaser Training Center, Miami, Florida, and instruction in June and July 1944 at the Sonar School, Key West, Florida. He then reported to Headquarters, Commander in Chief US Fleet, Navy Department, Washington, DC, and was assigned as Anti-Submarine Warfare Officer on the Staff of Commander Tenth Fleet until the cessation of hostilities in August 1945.

Again ordered to sea, he served successively as Executive Officer of USS Quincy (CA-71) and Commanding Officer of USS Higbee (DDR-806). When detached from the latter vessel in June 1948, he was ordered to the Amphibious Base, Little Creek, Norfolk, Virginia, where he served as Executive Officer until March 1950. He next served until May 1951 as Officer in Charge of the US Naval Examining Center, Naval Training Center, Great Lakes, Illinois.

From June 1951 until May 1952 he commanded USS Winston (AKA-94), which participated in action in the Korean Theater against enemy North Korean and Chinese Communist forces, including the Communist China Spring Offensive in June and July 1951. In June 1952 he returned to the Navy Department for duty as Head of the Plans and Programs Coordination Branch, Atomic Energy Division. In June 1954 he was ordered detached and to Guam, Marianas Islands, as Commanding Officer of the US Naval Station. Under orders of June 7, 1957, he now serves as Commanding Officer of the Office of Naval Research Branch Office, Chicago, Illinois.