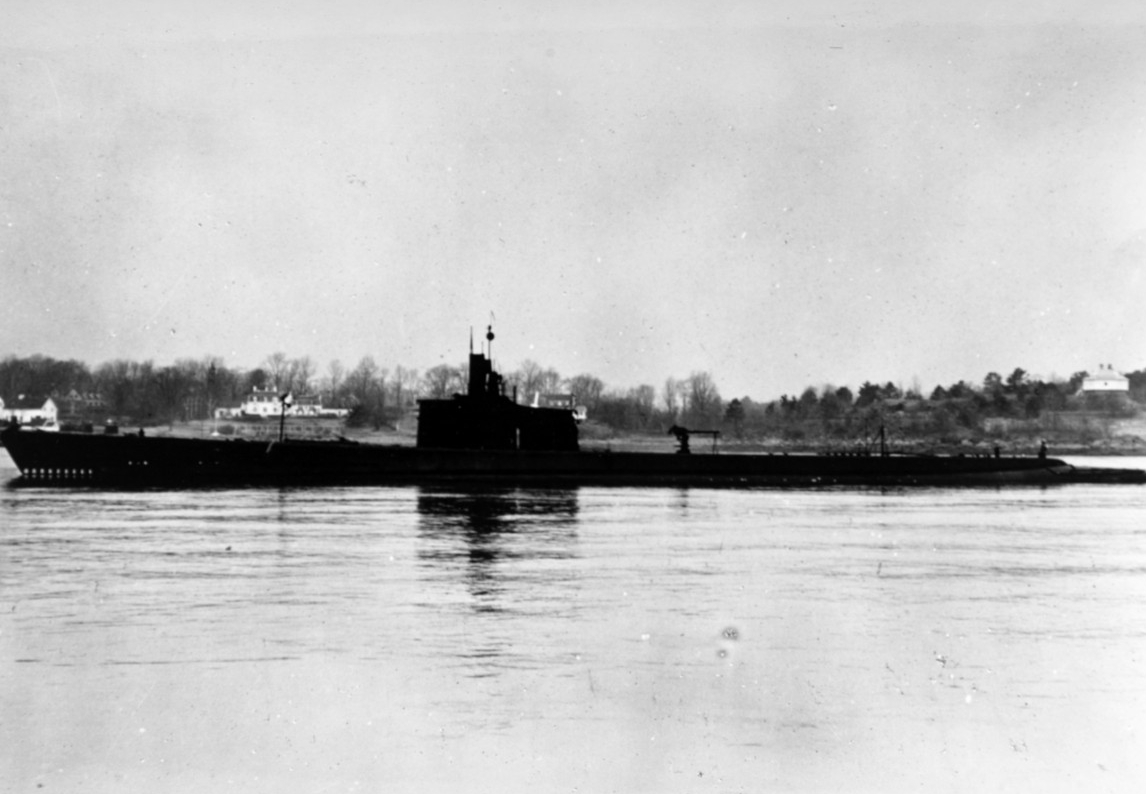 The first Grenadier (SS-210) was laid down on 2 April 1940 at Portsmouth, N.H., by the Portsmouth Navy Yard, launched 29 November 1940; sponsored by Mrs. Virginia E. Anderson, wife of Rear Adm. Walter S. Anderson, the Director of Naval Intelligence, and commissioned on 1 May 1941, Lt. Cmdr. Allen R. Joyce in command. 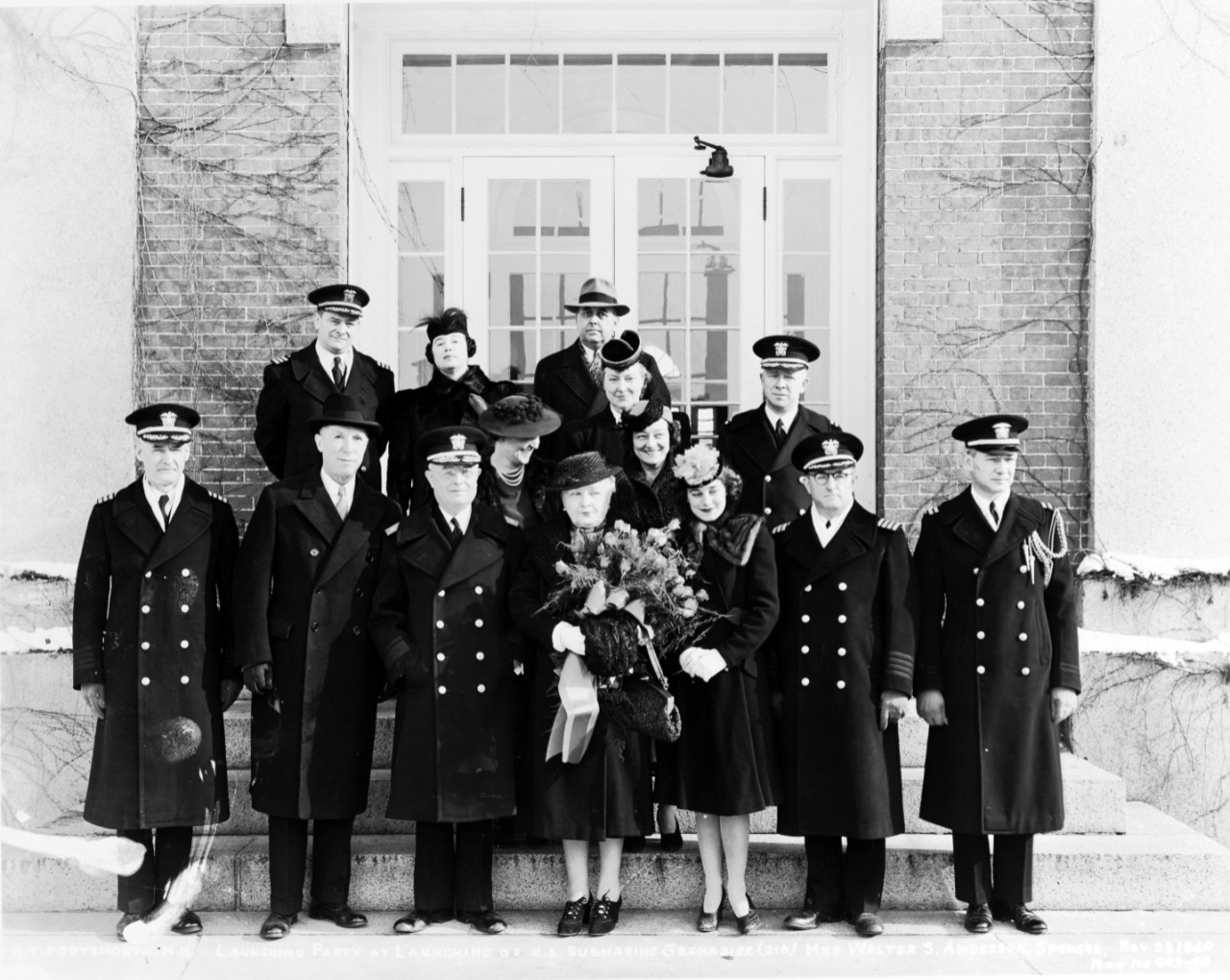 On 20 June 1941 Grenadier participated in the search for O-9 (SS-70) which had failed to surface after a deep test dive, and was present 2 days later as memorial exercises were conducted over the spot where O-9 and her crew lay. After shakedown in the Caribbean, Grenadier returned to Portsmouth 5 November for refit. Less than three weeks after the Japanese attack on Pearl Harbor, she sailed for the Pacific to join the submarine fleet which was America's first line of attack in the Pacific.

Grenadier's first war patrol from 4 February to 23 March 1942 took her near the Japanese home islands, off the coast of Honshu, and brought her several targets but no sinkings. On 12 April Grenadier departed Pearl Harbor for her second war patrol, along the Shanghai-Yokohama and Nagasaki-Formosa shipping lanes. On 8 May 1942 she torpedoed and sank one of her most important kills of the war, transport Taiyo Maru. Post-war examination of Japanese records showed Taiyo Maru to be more than just the ordinary transport; she was en route to the East Indies with a group of Japanese scientists, economists, and industrial experts bent on expediting the exploitation of the conquered territory. Their loss was a notable blow to the enemy war effort.

On 25 May 1942 Grenadier was diverted from her patrol area to Midway, where she formed part of the submarine patrol line as the American fleet in a bloody but brilliant battle handed the Imperial Navy its first defeat in some three hundred years. Grenadier's third war patrol was in the Truk area, heavily patrolled by enemy ships and planes. Although she sighted some 28 Japanese ships, enemy planes effectively hampered her, and she returned to her new base, Fremantle, Australia, empty-handed.

The Malay Barrier was the site of Grenadier's fourth war patrol from 13 October to 10 December 1942. After laying a minefield off Haiphong, Indochina [Vietnam], the submarine made an unsuccessful attack on a large freighter. During the severe depth charging which followed, sea water seeped into the batteries; Grenadier's crew suffered headaches and nausea from chlorine gas poisoning for the remainder of the patrol. To increase the misery, on 20 November Grenadier spotted a Ryujo-class carrier, escorted by a cruiser and a destroyer, heading through the Strait of Makassar too distant to shoot. Grenadier surfaced to radio the carrier's location and course to Fremantle in hope that another submarine could capitalize on it.

Grenadier's fifth war patrol between 1 January and 20 February 1943, brought her considerably better fortune than earlier patrols. A 75-ton schooner fell victim to her deck guns ob 10 January, and two days later Grenadier sighted a small tanker with a barge in tow. Judging the target not worth a torpedo, she slipped silently into the column behind the two Japanese ships. At dusk she battle surfaced. With binoculars lashed to the deck guns as sights, she raked tanker and barge sinking them immediately. The remainder of her patrol, along the Borneo coast through shallow and treacherous waters, was hampered by fathometer failures. She conducted an aggressive attack on two cargo ships 22 January but did not sink them.

The battle-tired submarine departed Australia on 20 March 1943 and headed for the Strait of Malacca, gateway between the Pacific and Indian Oceans. Patrolling along the Malay and Thai coasts, Grenadier claimed a small freighter off the island of Phuket on 6 April. She remained in the area and late in the night of 20 April sighted two merchantmen and closed in for the attack. Running on the surface at dawn on 21 April, Grenadier spotted, and was simultaneously spotted by, a Japanese plane. As the sub crash-dived, her skipper, Cmdr. John A. Fitzgerald commented "we ought to be safe now, as we are between 120 and 130 feet." Just then, bombs rocked Grenadier and heeled her over 15 to 20 degrees. Power and lights failed completely and the fatally wounded ship settled to the bottom at 267 feet. She tried to make repairs while a fierce fire blazed in the maneuvering room.

After 13 hours of sweating it out on the bottom Grenadier managed to surface after dark to clear the boat of smoke and inspect damage. The damage to her propulsion system was irreparable. Attempting to bring his ship close to shore so that the crew could scuttle her and escape into the jungle, Cmdr. Fitzgerald even tried to jury-rig a sail. But the long night's work proved futile. As dawn broke on 22 April, Grenadier's weary crew sighted two Japanese ships heading for them. As the skipper "didn't think it advisable to make a stationary dive in 280 feet of water without power," the crew began burning confidential documents prior to abandoning ship. A Japanese plane attacked the stricken submarine; but Grenadier, though dead in the water and to all appearances helpless, blazed away with machine guns. She hit the plane on its second pass. As the damaged plane veered off, its torpedo landed about 200 yards from the boat and exploded.

Reluctantly opening all vents, Grenadier's crew abandoned ship and watched her sink to her final resting place. A Japanese merchantman picked up 8 officers and 68 enlisted men and took them to Penang, Straits Settlements [Malaysia], where they were questioned, beaten, and starved before being sent to other prison camps. They were then separated and transferred from camp to camp along the Malay Peninsula and finally to Japan. Throughout the war they suffered brutal, inhuman treatment, and their refusal to reveal military information both frustrated and angered their captors. Word that most of the crew had survived the loss of their boat reached Australia 27 November 1943. Despite the brutal and sadistic treatment, all but four of Grenadier's crew survived.