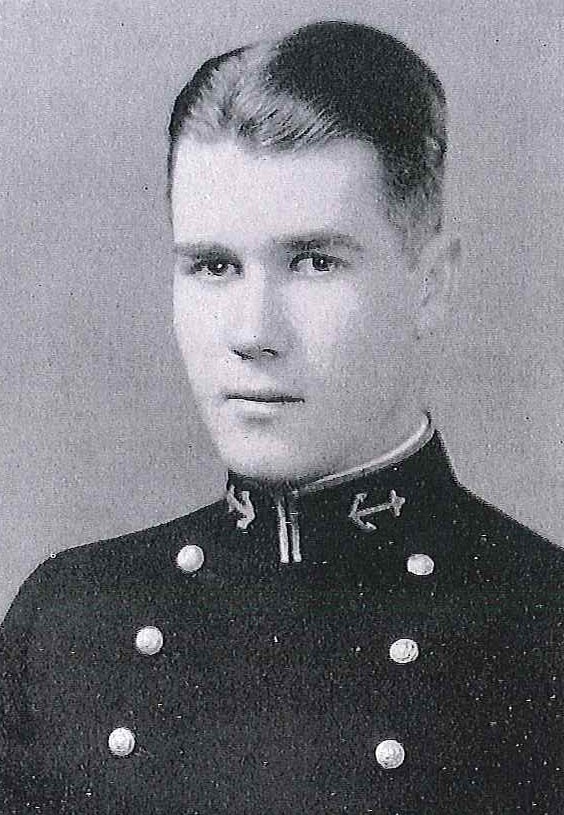 Charles Rudolph Fenton was born in Annapolis, Maryland, on May 4, 1907, son of Horance J. and Geneva E. (Kaiser) Fenton. He attended public schools, and entered the US Naval Academy as a Midshipman from Maryland, on June 29, 1925. At the Academy he participate in basketball, swimming and tennis. He was graduated and commissioned Ensign on June 6, 1929, and through subsequent promotions attained the rank of Captain, to date from March 30, 1945.

Remaining at the Naval Academy for two months after graduation, for duty with the Leech Cup Tennis, he was then assigned to USS Oklahoma, a unit of Battleship Division 3, Battle Fleet, in which he served as communication officer until October 1930. He had flight training at the Naval Air Station, Pensacola, Florida, designated Naval Aviator in September 1931, joined USS Augusta for duty with that cruiser’s aviation unit. Two year later when the Augusta relieved USS Houston as Flagship of the Asiatic Fleet at Shanghai, China, he reported aboard the Houston for return to the United States, and subsequent duty aboard.

The Houston joined the Fleet in San Francisco, made the summer cruise around to New York, and in the summer of 1934, made the Presidential Cruise to Honolulu, T.H., where he was detached for a tour of duty as a pilot of Patrol Squadron One, based at Pearl Harbor. In July 1936 he was ordered to San Diego, California, where he joined Fighting Squadron One based first, on USS Langley, later on USS Lexington. While so assigned, he participated in the National Air Races in Los Angles in 1936, receiving a commendatory letter from Commander Aircraft, Battle Force, for excellent flying.

He was ordered to Norfolk, Virginia, in 1937, when Fighting Squadron One became Fighting Squadron 6, attached to USS Enterprise, and remained in that assignment until July 1939. He then served for two years as a flight instructor at the Naval Air Station, Pensacola, and in July 1941 joined Fighting Squadron 42, as Executive Officer. He later served a Commanding Officer of that squadron, and as such was awarded the Air Medal and the Navy Cross. With citations following in part:

Air Medal: “For meritorious achievement in aerial flight during operations against enemy Japanese forces in the Pacific War Area from January 31, to March 11, 1942. Completing his fifth mission during this period, (he) contributed materially to the success of his squadron…”

Navy Cross:  “For extraordinary heroism and conspicuous devotion to duty as Commanding Officer of a Fighting Squadron in action against enemy Japanese forces during the period May 4-8, 1942, Lieutenant Commander Fenton led his squadron in skillfully maneuvered an timely interference against enemy Japanese aircraft attempting to break up attacks on Tuglagie by our carrier based bombing ad torpedo planes on May 4, and on enemy carriers in the Coral Sea on May 7 and 8… The squadron (under his leadership) shot down a total of twenty-two enemy planes… (and assisted) in the sinking of one enemy Japanese carrier and he sinking or damaging of a second carrier and eight other enemy vessels…”

Returning to the West Coast, he organized another fighter squadron, VR-11, which he commanded from its commissioning in July 1942, until March 1943. In April he reported to the Navy Department, Washington, D.C., to serve as Officer in Charge of the Aviation Section, Base Maintenance Division, Office of the Chief of Naval Operations. He received a Letter of Commendation, with Ribbon, from the Secretary of the Navy for “excellent service” in that capacity, which states that “he ably organized and directed the assembly and training in the United States of Advanced Base aviator units and their equipment for the establishment of aviation bases in the combat areas…”

From October 1945 until May 1948 he was a member of the Staff of Commander in Chief, Pacific Fleet (Logistics), with headquarters at Pearl Harbor, T.H. In June 1948 he assumed command of USS Gardiners Bay (AVP 39), and a year later returned to the Office of the Chief of Naval Operations, this time assigned to the Guided Missiles Division. Detached in June 1952, he was at sea for to years in command, successively, of USS Palau (CVE-122) and USS Valley Forge (CVA-45), then again served in the Office of the Chief of Naval Operations, as Assistant Director of the Air Warfare Division.