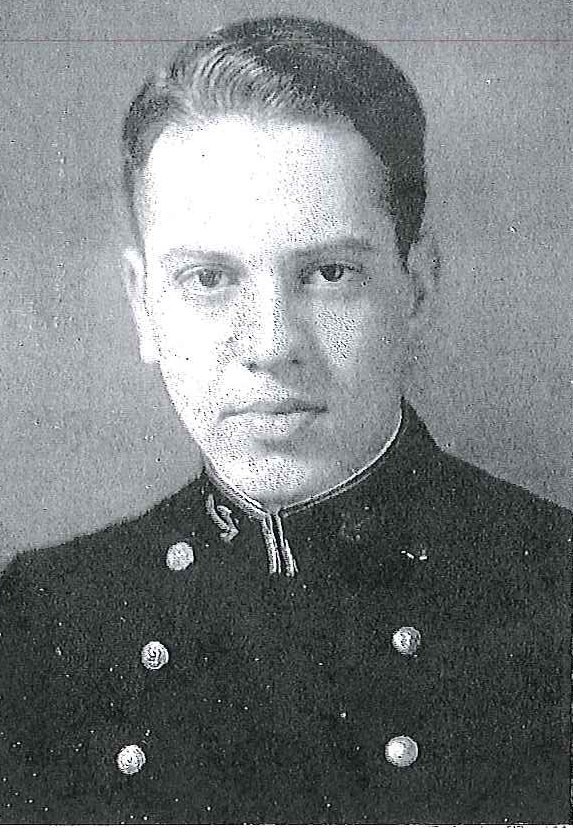 Warfield Clay Bennett, Jr., was born in Richmond, Kentucky, on September 8, 1914, son of Warfield C. and Esther (Burnam) Bennett. He attended Madison High School, Richmond, Kentucky, and Kavanaugh School, Lawrenceburg, Kentucky, prior to entering the US Naval Academy, Annapolis, Maryland, from the State of Indiana, in 1932. Graduated and commissioned Ensign on June 4, 1936, he subsequently advanced in rank attaining that of Captain to date from March 1, 1955.

Following graduation from the Naval Academy in 1936, he joined USS Tennessee, operating with Battleship Division TWO, Battle Force. Detached from that vessel in August 1937, he was ordered to the Navy Yard, New York, New York, where USS Brooklyn was building. He went aboard that light cruiser upon her commissioning, September 30, 1937, to serve until December 1938, when he reported on board the USS Claxton. In the latter at the time she was turned over to Great Britain, under the Lend-Lease Act, he received a commendatory letter for his services during this transfer. He was assigned in January 1941 to USS Dewey, and was attached to that destroyer based at Pearl Harbor, Territory of Hawaii, when the Japanese attacked the Naval Base there on December 7, 1941, and served in that vessel until February 1942. He next had duty in USS New Orleans, participating in the Coral Sea and Midway Operations.

Between August 1942 and August 1944 he attended a course in radio engineering at the Postgraduate School, Annapolis, Maryland. Upon completing his instruction, he became Commanding Officer of USS Nicholson, which under his command participated in the capture and occupation of the Southern Palau Islands; assaults on the Philippines; THIRD Fleet supporting operations in connection with the Okinawa attack; Battle of Surigao Strait; Northern Luzon and Formosa attacks; Luzon attacks; assault and occupation of Okinawa Gunto; and the THIRD Fleet operations against Japan. Upon the cessation of hostilities she was operating off the southeastern coast of Honshu; entered Sagami Wan, Honshu on August 29, 1945 and on September 15, of the same year, sailed into Tokyo Bay.

“For excellent service…while serving as Commanding Officer of the USS Nicholson from September 1944 to September 2, 1945…” he received a Letter of Commendation with authorization to wear the Commendation Ribbon and Combat “V,” from the Commander in Chief, US Pacific Fleet. The citation continues in part: “During this period the Nicholson served as a unit of anti-submarine and antiaircraft screen for escort carriers operating in the dangerous waters south of Okinawa, supporting the Okinawa invasion with plane strikes at the enemy forces.”

Detached from command of the Nicholson in March 1946, he next assisted in the fitting out of USS Rochester at the Bethlehem Steel Company, Quincy, Massachusetts, but was detached in May 1946 before she was commissioned, to join the staff of Commander Battleships-Cruisers, US Atlantic Fleet, to serve as Electronics and Assistant Material Officer. From January 1948 to June 1951 he was assigned to the Electronics Characteristics Section in the Office of the Chief of Naval Operations, Navy Department, Washington, DC. During this period he was designated for “engineering duty only (electronics).” He next served as Electronics Material Officer at the San Francisco, (California) Naval Shipyard and in June 1953 joined the Staff of Commander Service Force, US Pacific Fleet as Electronics Maintenance Officer.

He was Comptroller at the Charleston (South Carolina) Naval Shipyard, between August 1955 and February 1958, after which he was assigned duty as Naval Industrial Engineer at the Philadelphia (Pennsylvania) Naval Shipyard. In June 1960 he became Commanding Officer and Director of the Naval Mine Defense Laboratory, Panama City, Florida, and under orders of March 26, 1963, returned to the Navy Department, Washington, DC for duty in the Bureau of ships.