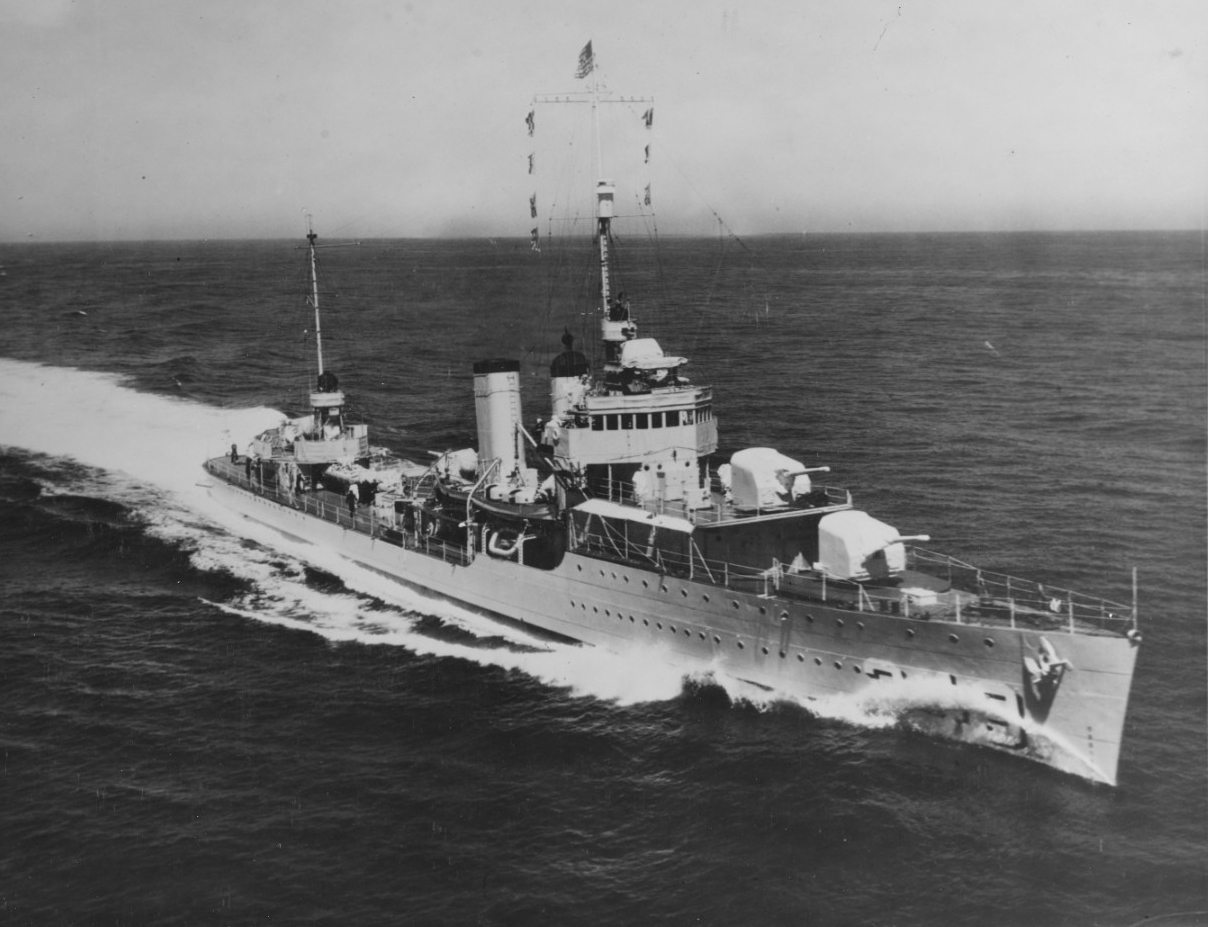 George Dewey, born 26 December 1837 in Montpelier, Vt., graduated from the Naval Academy in 1858 and after varied important service assumed command of the Asiatic Station 3 January 1898, with his flag in the protected cruiser Olympia. On the night of 30 April 1898 Admiral Dewey led his squadron into Manila Bay and the next morning in 2 hours destroyed the Spanish fleet without a single American loss. Admiral Dewey was relieved of his command 4 October 1899 and ordered to Washington, D.C., where he was designated President of the General Board. On 24 March 1903 he was commissioned Admiral of the Navy, a rank created for him, which he held until his death 16 January 1917. 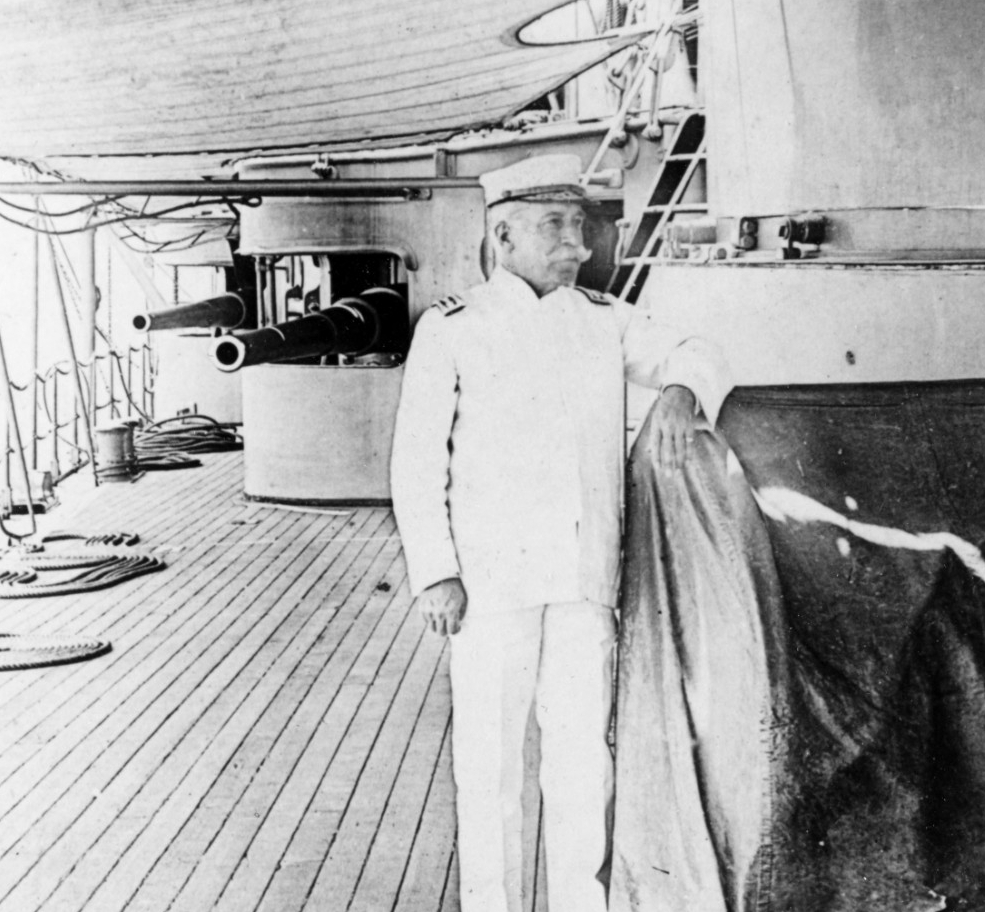 After two training cruises to Guantanamo Bay, Cuba, and Port-au-Prince, Haiti, Dewey sailed from Norfolk 1 April 1935 for San Diego, Calif., arriving 14 April. Until 1938 she operated principally from this port on local operations as well as engaging in fleet tactics, battle practice, and scheduled exercises. She cruised along the west coast as far north as Alaska and south to Callao, Peru, and made three cruises to the Hawaiian area. From 4 January to 12 April 1939 she returned to the Atlantic for a fleet problem. Dewey arrived at Pearl Harbor 12 October 1939 and participated in tactical exercises, battle practice, fleet problems, and maneuvers until 1941.

When the Japanese attacked Pearl Harbor 7 December 1941, Dewey was undergoing tender overhaul. She immediately took the enemy planes under attack and that afternoon got underway to patrol in the Hawaiian area. On 15 December she joined TF 11 sailing to relieve the beleaguered Marine garrison on Wake Island, but the island fell 23 December and Dewey returned to her patrol assignment.

In February 1942 she rejoined TF 11 for a projected strike on Rabaul. The element of surprise was lost when the force was sighted by two enemy patrol planes and the strike was canceled after Dewey aided in splashing several of 18 bombers led to the force by radio reports from the patrol planes. She continued to screen Lexington (CV-2) in the strikes on Lae and Salamaua, New Guinea, on 10 March and returned to Pearl Harbor on the 26th.

TF 11 sortied from Pearl Harbor 15 April 1942 for operations in the Solomons. On 5 May word came that the Japanese were advancing on' Port Moresby, and Dewey's group raced to join Yorktown (CV-5) in the Battle of the Coral Sea. In this great strategic victory, the Japanese were at last turned back from the advance southeastward, Australia and New Zealand were spared from threatened invasion, and carrier warfare came of age as for the first time major fleets battled without surface contact. When Lexington came under intensive attack, Dewey joined in sending up antiaircraft fire which splashed or drove off many of the attackers, suffering five men wounded from enemy strafing. Lexington was badly hit, and as fires raged out of control, she had to be abandoned, with Dewey rescuing 112 of the carrier's survivors. She screened Yorktown into Noumea 12 May, and then returned to Pearl Harbor 25 May in the screen for Enterprise (CV-6).

With the Japanese out in force and known to be threatening Midway Island, Dewey sailed just three days later in the Enterprise task force. The Battle of Midway was joined 2 to 6 June, and throughout this historic action Dewey screened vulnerable oiler Platte (AO-24). Returning to Pearl Harbor 9 June, Dewey escorted Saratoga (CV-3) as the carrier brought an air squadron to Midway between 22 and 29 June. On 7 July she cleared for the initial landings on Guadalcanal, which she bombarded 7 August. On that day of the first assault, Dewey fired on attacking dive bombers, whose bombs wounded one of her men, and during the next day's air attack, joined in bringing down several of the enemy. She went to the rescue of two stricken ships, aiding Jarvis (DD-393) to regain power, and towing George F. Elliot (AP-13) until the seriousness of her damage made it necessary to abandon her. Dewey rescued 40 of the transport's survivors. 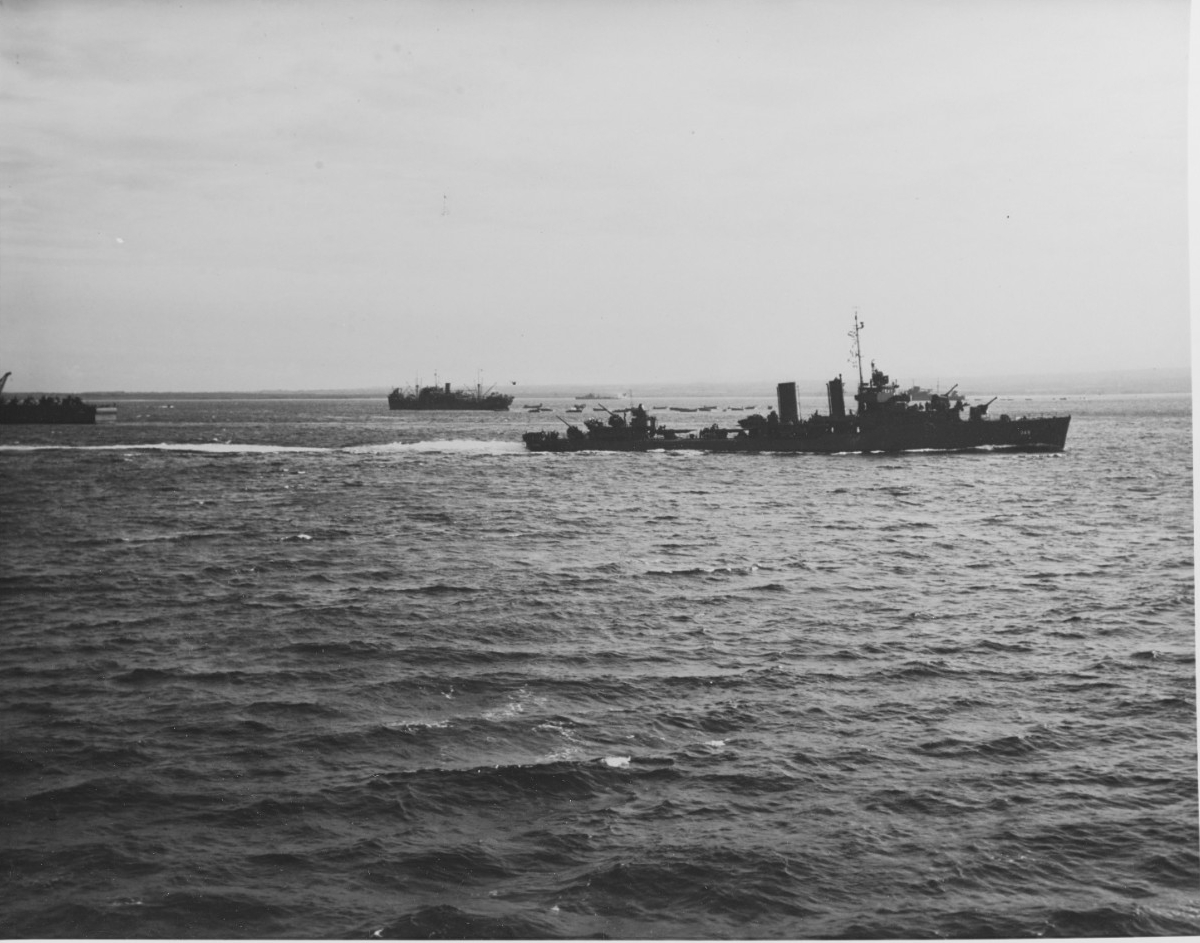 Dewey remained in the Solomons to protect supply and communication lines, and screened Saratoga during the Battle of the Eastern Solomons on 24 August 1942, in which American ships turned back a major effort of the Japanese to reinforce Guadalcanal and Tulagi. She escorted Saratoga, damaged by submarine torpedo 31 August, to Pearl Harbor, arriving 23 September, and 6 days later sailed for overhaul at San Francisco. On 27 December 1942 she got underway for duty in Alaskan waters. When Warden (DD-352) ran aground at Amchitka, Dewey attempted to tow her off the rocks, then aided in rescuing her survivors when stormy weather forced her abandonment. On 7 April 1943 Dewey sailed for San Pedro to escort an assault group to Attu for the invasion 11 May. She also took part in the landings at Kiska 15 August before escorting a group of LSTs to San Francisco, arriving 19 September.

Sailing from San Diego 13 January 1944 Dewey arrived off Kwajalein 31 January and served as escort during the carrier strike on Majuro of 11 February and the invasion landings on Eniwetok on 18 February. She escorted convoys between Eniwetok, Roi, and Majuro, and bombarded Mille Atoll on 17-18 March. From 22 March to 6 June she operated in the screen of TF 58, taking part in raids on Palau, Yap, Ulithi and Woleai; the invasion of Hollandia on 21 and 22 April; and the strike on Truk of 29 April to 1 May. On 6 June she sailed to screen carriers in fighter sweeps against Tinian and Saipan on 11 June, then bombarded of Saipan and Tinian on 13 and 14 June, when she fired on enemy barges attempting to escape along the shore line and started a fire in an oil dump. When the Japanese fleet challenged the Marianas landings, she screened the carriers during the resulting Battle of the Philippine Sea on 19 and 20 June and rescued several pilots and crew members who were forced to ditch after their air strikes at extreme range against the retreating Japanese fleet.

Dewey joined the transport screen 1 July 1944 for the invasion of Guam. She furnished close fire support for reconnaissance groups, covered the work of underwater demolition teams, conducted night harassing fire, and patrolled off the island until 28 July when she sailed for a brief overhaul at Puget Sound Navy Yard.

Dewey put to sea 30 September 1944 to join the logistics group for the 3d Fleet on 10 October. She screened this group in its refueling operations for the Philippines invasion until the typhoon of 18 December which heavily damaged the units of the 3d Fleet. Dewey had lost all power by noon and was rolling more than 75°; her number one stack was torn and thrown against the boat deck. She rejoined her group 8 February 1945 after repairs had been completed at Ulithi, and arrived at Iwo Jima 17 February where she assisted in putting out fires on Patuxent (AO-44). Aiding the Marines who assaulted the island 19 February, she helped break up a Japanese counter-attack by firing star shell illumination on 23 February.

After escorting a convoy to Leyte from 4 to 6 March 1945 Dewey rejoined the logistics group for the Okinawa operation, screening the oilers as they refueled the carriers in preinvasion air strikes and the raids in the Far East which continued until the end of the war. On 21 August she got underway for San Diego, arriving 7 September. She continued to the east coast, arriving at Brooklyn Navy Yard 25 September. Dewey was decommissioned 19 October 1945 and sold 20 December 1946.