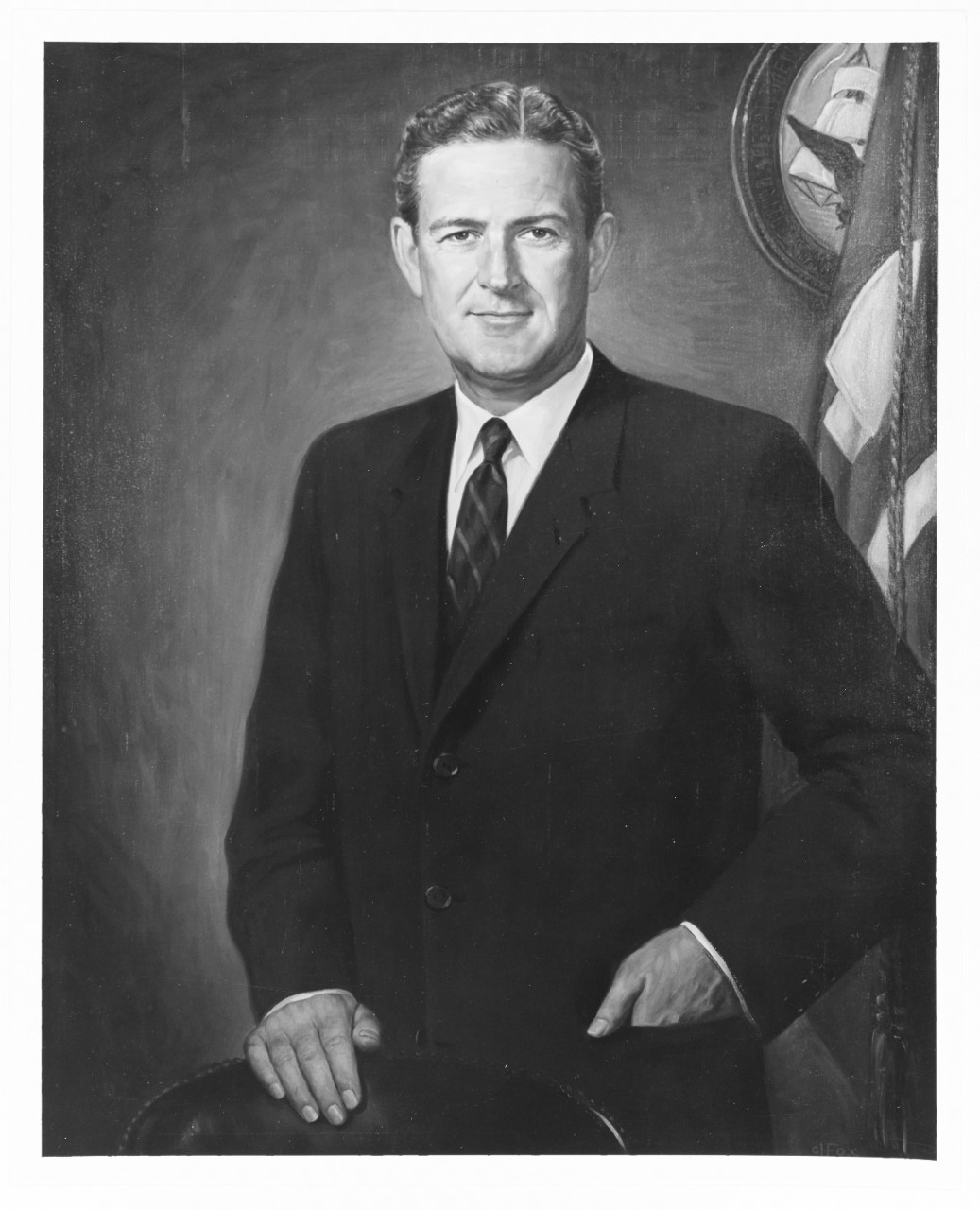 John Bowden Connally, Jr., was appointed Secretary of the Navy by President-elect John F. Kennedy on 27 December 1960 and served until 20 December 1961.

In addition to a distinguished Navy war record, Mr. Connally brought to his new office a diverse, well-rounded background in law, business and corporate management. After World War II, he and several other veterans organized Radio Station KVET in Austin, of which he was President and manager for three years. He had had extensive management experience in widely diversified interests including oil, oil field services, radio-TV, carbon black, ranches, etc., and a director of several corporations, including the New York Central Railroad, Insurance Securities Inc. (of San Francisco).

In the non-commercial field, he was a Director of the Southwestern Exposition and Fat Stock Show, and Boys, Incorporated.

Born the son of Lela Wright and John Bowden Connally of Floresville, Texas, 27 February 1917, he attended Harlandale Public Schools in San Antonio, Floresville Public Schools and the University of Texas, at Austin, from which he was graduated with the degree of Bachelor of Laws. At the latter he was President of Athenaeum Literary Society, won the Inter-Society Oratorical Contest, was Vice-President of the Freshman Law Class and Speaker of the Class, was elected to Students Assembly and served as its Chairman in 1939, was President of the Students Association in 1938 and that year appeared in Who's Who in American Colleges. He was also President of Alpha Psi Omega (national honorary dramatic organization) and member and Dean of Delta Theta Phi (legal fraternity).

He was commissioned Ensign in the US Naval Reserve on 11 June 1941, was promoted to Lieutenant (junior grade) the next year, and to Lieutenant, to date from 1 October 1943. Commissioned Lieutenant Commander from 3 October 1945, he held that rank until the termination of his service in 1954.

He was then sent to Algiers where, for nearly a year, he assisted in planning for the Italian invasions. Following specialized training in radar, he was assigned to USS Essex (CV-9), which won the Presidential Unit Citation for heroic service in the Pacific during the period 31 August 1943 until 15 August 1945.

As Radar and Radio Officer, later Fighter Direction Officer of that aircraft carrier, and for a time serving also as CIC Officer for Task Group 38.1, he participated in action in the Gilberts, Marshalls, Marianas, Philippines, Formosa, China Sea, Bonins, Ryukyus and Japan during the latter period of the war. He was observed to be an "extremely outstanding officer" by Admiral T. L. Sprague, USN, in command of Task Group 38.1, who said his "work was, in great part, responsible for the success of the Task Group."

He was awarded the Bronze Star Medal with Combat "V", and citation, in part, as follows: "For heroic achievement while serving as Fighter Director Officer on board the USS ESSEX during a concentrated attack by enemy Japanese aircraft against that vessel in the forward Pacific Area on April 6, 1945. Alert and aggressive in the performance of duty as an overwhelming force of hostile planes flew in over the Task Group, Lieutenant Connally rendered gallant and effectual service in coordinating a determined and prompt aerial offensive and, by his professional skill, brilliant tactics and cool courage in the face of grave peril, contributed essentially to the success of embarked planes in shooting down sixty-nine Japanese aircraft and to the security of the ESSEX from all damage..."

A Gold Star in lieu of the Second Bronze Star Medal was awarded, but rescinded in favor of the Legion of Merit, with Combat "V", citation to which follows, in part: "For exceptionally meritorious conduct...as Force Fighter Director Officer on board the USS ESSEX, Flagship of Task Force 58, from July 7, 1944, to June 26, 1945; and later as Task Group Fighter Director on the Staff of Commander Fast Carrier Task Group 38.1, with Flag in the USS BENNINGTON during operations against enemy Japanese forces at sea and against the Japanese mainland from June 26 to August 28, 1945. An officer of resourcefulness, mature judgment and clarity of mind, Lieutenant Connally effected notable improvements in Fighter Director and CIC policy and doctrine. His practical application of these doctrines together with his thorough knowledge of aerial tactics made possible the utilization of the air power available to cause maximum destruction of Japanese planes threatening our forces and to afford the greatest protection for elements of the Carrier Task Group...By his distinctive service in this vital phase of operations, (he) made a substantial contribution to the success of our offensives in the major campaigns conducted during this period, thereby upholding the highest traditions of the U. S. Naval Service."

Detached from USS Essex in November 1945, he was relieved of all active duty at the Officer Personnel Separation Center, Washington, DC, on 3 January 1946. He remained a member of the Naval Reserve (inactive) until 1954.