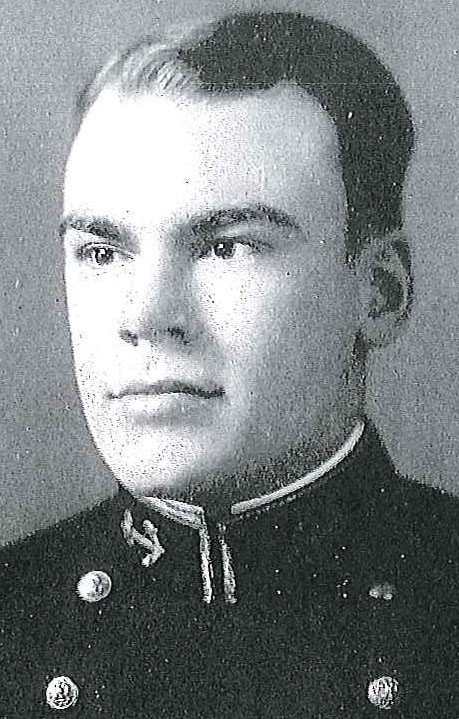 Carl Morton Fellows was born in Fitchburg, Massachusetts, on December 27, 1913, son of Mrs. And Mr. John B. Fellows. He received his early education from public schools in Fitchburg, and entered the US Naval Academy, Annapolis, Maryland, from his native state on June 14, 1932. Upon graduation on June 4, 1936, he was physically disqualified for commission and resigned effective August 31, 1936. On June 24, 1937 he was commissioned Ensign in the US Naval Reserve, and through subsequent promotions attained the rank of Commander, on November 16, 1949, to date from November 5, 1945.

A salesman for Fitchburg, Massachusetts, Paper Company prior to World War II, he was called to active duty in the Naval Reserve in June 1941, and served until August of that year at the Local Defense Force School, First Naval District, Boston, Massachusetts. In September after attending the Sound School at Key West, Florida, he joined USS Tourmaline (PY 20), during the conversion of that yacht at the Marine Basin Company, Brooklyn, New York, and served aboard until April 1942. After attending the Gyro School at Brooklyn Navy Yard, he had three months instruction at the Submarine Chaser Training Center, Miami, Florida, after which he reported as Prospective Commanding Officer of USS PC 617, then building at George Lawley and Sons, Newport, Massachusetts. He continued the PC-617 from her commissioning until July 1943.

Ordered next to the Federal Shipbuilding and Dry Dock Company, Newark, New Jersey, to fit out USS Mart (DE 174), he served as her Commanding Office from her commissioning in September 1943 until January 1944, during her shakedown and training period. He was detached in March 1944 to fit out another vessel, USS La Prade, building at the Brown Shipbuilding Company, Houston, Texas. Brief service in that destroyer escort completed, he was detached in February 1945. He then served as Executive Officer at the U.S. Navy Radar Training School, St. Simons Island, Georgia, until released from all active duty, effective November 1945.

On release from active duty he returned to Fitchburg Paper Company as Vic President in Charge of Operations.