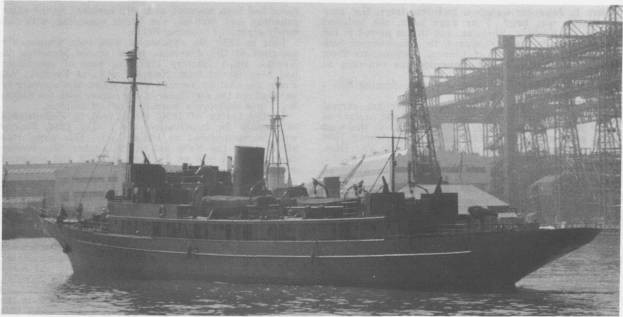 A mineral of variable color, consisting of a complex silicate which makes a striking gem when transparent and cut.

Tourmaline (PY-20), a yacht built in 1930 at Bath, Maine, by the Bath Iron Works as Sylvia, was purchased by the Navy on 16 May 1941 from Logan G. Thomson. She entered the Marine Basin Co., Brooklyn, N.Y., on 23 June, for conversion before proceeding to the New York Navy Yard where she was commissioned as Tourmaline (PY-20) on 19 September 1941, Lt. Comdr. Charles E. Judge, USNR, in command.

The converted yacht departed New York harbor on 2 October and arrived at Norfolk, Va., two days later. She operated out of Hampton Roads during the two remaining months that the United States remained technically at peace. After Japan's attack on Pearl Harbor, she conducted her initial war patrols off the east coast based at Norfolk and at Charleston, S.C.

The early part of the year 1942 found Tourmaline operating between Norfolk and Key West, Fla. On 29 June, she departed Key West to escort a convoy of merchant vessels to Norfolk. En route back toward Charleston, she assisted Landsdowne (DD-486) to pursue an underwater contact; but neither ship managed to locate the suspected U-boat. The yacht arrived at Charleston on 5 July. Her next mission called for her to escort a convoy to the British West Indies. She reached Trinidad with her charges on 26 July and patrolled in that vicinity through early August before sailing for Key West on the 12th of that month.

After cruises on patrols in Florida waters, she departed Key West on 27 October, in company with SC-499, SC-641, and SC-675, in escort five merchantmen to Havana, Cuba. Tourmaline next headed for New York, where she arrived on 7 November. She returned to Guantanamo Bay, Cuba, on the 19th, establishing a pattern which lasted through much of her subsequent service in which she escorted convoys between New York and ports in the Caribbean. On 13 December 1942, five days out of New York, Tourmaline's underwater sound gear picked up a strong metallic echo. She speeded to attack and dropped three depth charges before her steering gear was damaged. Forced to steer with her engines, the escort broke off the chase, and her quarry escaped.

After the damage was repaired, Tourmaline resumed escort duty and continued convoy work until 25 January 1944. On that day, the yacht received orders to report to the 1st Naval District, where she joined the Naval Local Defense Force based at Boston, Mass. For the remainder of 1944 and into June 1945, Tourmaline patrolled the waters off the Massachusetts coast through the end of the war in the Atlantic.

Decommissioned on 18 July 1945, Tourmaline was temporarily laid-up at the Mystic Shipbuilding Company and Repair Yard, East Boston, Mass. Struck from the Navy list on 13 August 1945, she was transferred to the War Shipping Board, Maritime Commission, on 3 January 1946. On 23 January 1946, Andrew M. Embiricos and Manuel E. Kulukundis, of the Greek War Relief Association, Inc., purchased the yacht under its original name, Sylvia.