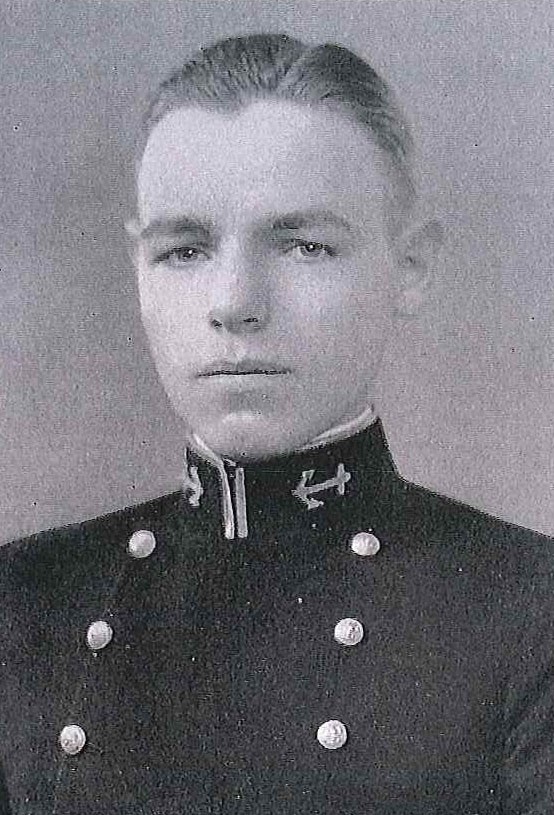 Howard Cavender Bernet was born in St. Louis Missouri, on April 10, 1908, son of the late Albert Edward and Lucille Cavender Bernet. He received his early education at St. Louis, attending Soldan High School, and completing his Freshman year at Washington University, at St. Louis. One of three brothers to attend the US Naval Academy, Annapolis, Maryland, he was graduated and commissioned Ensign on June 6, 1929, and subsequently attained the rank of Captain to date from March 30, 1945.

After graduation from the Naval Academy, he was assigned to USS New Mexico, a battleship operating in the Pacific. Detached two years later, he sailed for the Orient where he served on board the cruiser Houston, flagship of our naval forces on China Station during the turbulent years when Japan launched her Greater East Asia program by invading Manchuria and Shanghai. On returning to the United States in 1934, he reported to USS Fox, a destroyer of the Scouting Force, Pacific, and served for two years at her Gunnery Officer and First Lieutenant.

A tour of shore duty under instruction, included a year at the Postgraduate School at Annapolis (General Line course), and a year at the Marine Corps Schools, Quantico, Virginia (Field Officers Course). He returned to sea in 1938, assigned to anti-aircraft gunnery duty in the battleship Idaho of the Pacific Fleet. The Idaho went to the Atlantic in the summer of 1941 and was in Iceland with heavy units of the British Fleet guarding the Denmark Straits against possible egress of the German battleship Tirpitz into the Atlantic at the time Japan attached Pearl Harbor. Within two months the Idaho was back in the Pacific.

In December 1942 he was transferred to the battleship Mississippi, in which as Navigator he saw service in the South Pacific, Aleutians and the Gilbert and Marshall Islands Campaigns. In August 1944 he was ordered to duty in the Bureau of Naval Personnel, Navy Department, Washington, DC. There he occupied the Large Combatant Ship desk in the Officer Detail Section, responsible for duty assignments of some 15,000 line efforts in all battleships, cruisers, and carriers during the final months of the war. For his performance in that billet he received a letter of commendation from the Chief of Naval Personnel.

For twenty months he commanded Destroyer Division NINETY TWO of the Pacific Fleet. In July 1948 he assumed command of the Chief of Naval Operations tanker Taluga (AO 62), and in five short months made two globe-circling trips to the Persian Gulf from both coasts of the United States. In February 1949 he returned to the Bureau of Naval Personnel, this time to serve as Head of the Officer Performance Division which included such diverse activities as Officer Promotions, Retirements, Discipline, Uniforms, and Correspondence.

When the Congress passed the Career Compensation Act of 1949, not only were higher pay scales adopted but new and complex administrative procedures were required in the field of physical disability retirement, involving also extensive liaison and joint action with the Army and Air Force. He was thereupon shifted to head a new Retirement Division which successfully completed the task of implementing all the provisions of the new law for both officers and enlisted men. That assignment was completed in August 1951, and from September that year until June 1952 he was a student at the Industrial College of Armed Forces, Washington, DC.

Sea and foreign duty began again with orders as Commanding Officer of USS Chilton (APA 38), flagship of Commander Transport Division TWENTY ONE of the Amphibious Force, Atlantic Fleet. During a year in the Chilton, he participated in NATO Exercise MAINBRACE, with visits to Edinburgh and Copenhagen, followed by five months in the Mediterranean with the Sixth Fleet. After returning to the United States, the ship took part in a Fleet Amphibious Exercise in the Caribbean.

In June 1953 he was ordered to duty as Naval Logistic Adviser and Executive Assistant on the staff of the Supreme Allied Commander, Europe, at SHAPE Headquarters near Paris, France. His two years’ service in this most important of all international military headquarters were of a particularly challenging nature. NATO made great strides during this period. In August 1955 he assumed command of Squadron TEN of the Destroyer Force, Atlantic Fleet. In November 1956 he reported to the Director of Naval Intelligence for duty as an Assistant Director of Naval Intelligence, his current assignment.

Captain Bernet is member of the Army-Navy Country Club, Washington, DC; Coronado Beach and Tennis Club; the US Naval Institute; and the US Naval Academy Athletic Association.