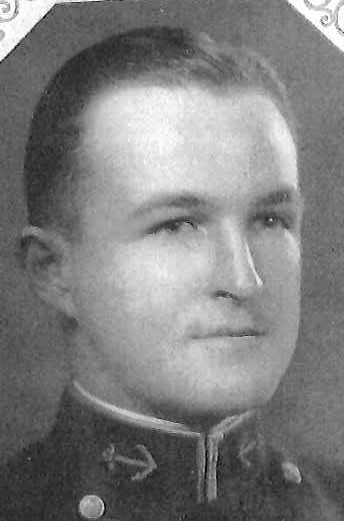 Hiram Cassedy was born in Brookhaven, Mississippi, on July 4, 1908, son of Hiram and Mary (Ewing) Cassedy, both now deceased. He attended Brookhaven High School and the Marion (Alabama) Institute prior to his appointment to the US Naval Academy, Annapolis, Maryland, from the seventh District of his native state in 1927. Graduated and commissioned Ensign on June 4, 1931, he subsequently progressed in rank, attaining that of Captain, to date from January 1, 1951. On April 1, 1956 he was transferred to the Retired List on the US Navy and was advanced to the rank of Rear Admiral on the basis of combat awards.

Upon graduation from the Naval Academy in 1931, he joined USS Twiggs, and in March 1932 transferred to USS Dickerson. He continued service afloat in USS New Mexico, June 1933 until June 1934, after which he had submarine training at the Submarine Base, New London Connecticut. Between January and May 1935 he was on board USS S-48 and following an assignment which extended to August 1936, in USS S-12, he had duty in connection with fitting out of USS Perch at the Electric Boat Company, Groton, Connecticut. He reported on board that submarine upon her commissioning, November 19, 1936.

He next had instruction in general line at the Postgraduate School, Annapolis, Maryland, June 1939- October 1940, at which time he returned to duty afloat in USS Greer. Detached from that destroyer in April 1941, he next had fitting out duty in USS Sailfish at the Navy Yard, Portsmouth, New Hampshire. Upon the commissioning of that submarine on May 15, 1940, he joined her to serve as Executive and Engineering Officer. He was attached to the Sailfish, operating in the waters around Manila, when the United States entered World War II, December 8, 1941. “For conspicuous gallantry and intrepidity as Executive Officer, Navigator and Assistant Approach Officer of a United States Submarine during three war patrols in enemy infested waters…” he was awarded the Silver Star Medal. The citation further states in part:

“Commander Cassedy successfully navigated his vessel through unfamiliar, confined hostile waters and, by his brilliant tactical knowledge and sound judgment in maneuvering into advantageous striking positions contributed to the success of his ship in sinking or severely damaging three important Japanese combatant vessels despite intense, persistent enemy countermeasures. His inspiring leadership and dauntless courage in the face of grave peril were essential factors in the subsequent safe return of his ship to port after each patrol…”

In March 1942 he assumed command of USS Searaven. Under his command the Searaven was ordered to the Philippines with ammunition for Corregidor. American Forces there had been overcome by the Japanese upon the arrival of the Searaven and she was diverted to rescue stranded Australian flyers off Timor. He participated in six war patrols while in command of the Searaven. For outstanding services while on board that submarine, he was awarded the Navy Cross, a Gold Star in lieu of the Second Silver Star Medal, and the Bronze Star Medal with Combat “V.” The citations follow in part:

Navy Cross:  “While commanding officer of the USS Searaven on April 18-19, 1042, (he was) directed to evacuate a number of airmen of the Royal Australian Air Force from Timor, N.E.I. The island was occupied by the enemy. Enemy forces were aware of the presence of the party of distressed aviators and operations were in progress to capture the group. (He) safely conducted (his) vessel to the rendezvous under hazardous conditions of navigation and by virtue of through preparations and excellent foresight effecting a contact with the Australians. Although the areas was under constant enemy patrol (his) vessel remained undetected. Under trying conditions and with the utmost pertinacity (he) directed the recovery of the aviators who were in an emaciated and fever ridden state…”

Gold Star in lieu of Second Silver Star Medal: “For conspicuous gallantry and intrepidity as Commanding Officer of the USS Searaven in action against enemy Japanese forces during that vessel’s Fifth War Patrol in the Pacific War Area from September 27 to November 24, 1942. Skillfully bringing his ship into shallow hostile waters, (he) delivered a series of daring torpedo attacks which resulted in the sinking of two valuable enemy ships totaling 21,965 tons and the severe damaging of an additional one of 6853 tons. Coolly evading enemy countermeasure, he brought his vessel safe back to port…”

Bronze Star Medal: “For meritorious service as Commanding Officer of the USS Searaven during the Sixth War Patrol of that vessel in enemy Japanese controlled waters, from December 18, 1942 to February 10, 1943. Penetrating enemy escort screens, (he) delivered torpedo attacks to sink an enemy freighter of over 5,000 tone and an escort vessel of 200 tons and damaged a minelayer of over 1,000 tons. Employing effective evasive tactics, during severe enemy depth-charging, he succeeded in escaping without damage to his ships…”

Detached from command of the Searaven in October 1943, he was an Instructor at the Submarine School, New London, Connecticut, until April 1944. Following fitting out duty in USS Tigrone at the Navy Yard, Portsmouth, New Hampshire, he assumed command of that submarine upon her commissioning, October 25, 1944. He was awarded the Legion of Merit with Combat “V,” for exceptionally meritorious conduct… as Commanding Officer of the USS Tigrone during the Second War Patrol of the vessel in enemy Japanese-controlled waters from May 20 to July 3, 1945…” The citation continues in part:

“Displaying excellent judgment, splendid seamanship and great determination, Commander Cassedy effected the rescue of thirty Allied aviators from dangerous waters close to the enemy shoreline another occasion, he succeeded in sinking a hostile 50-ton lugger during a gun engagement. Subsequently evading all enemy countermeasure, he brought his ship back to port…”

In July 1945 he reported as Air-Sea Rescue Liaison Officer on the staff of the commander in Chief, US Pacific Fleet. In that capacity he took passage in the USS Proteus to Japan, following the cessation of hostilities. He brought the I-400 into port with the prize crew after relieving men from USS Blue, who had first boarded her. He later took command of the ex-Japanese submarine I-14 and was in charge of a group of three enemy submarines until he delivered them to Pearl Harbor, T.H., in January 1946. He received a Letter of Commendation with authorization to wear the Commendation Ribbon and Combat “V,” from the Commander in Chief, US Pacific Fleet. The citation in part follows:

“For meritorious conduct… from August 1 to September 2, 1945, as Senior Member of an Air-Sea Rescue Group, he efficiently instructed various Army Air Commands in communication procedures between aircraft and submarine and in the methods of rescuing downed aviators by submarine. This was of inestimable value to the ultimate success of future coordinated air-sea rescue operations. As a result of his thorough knowledge of enemy submarines and his inspiring leadership, Commander Cassedy took command of the captured Japanese submarine I-400 and later acted as Commander of Submarine Activities in the Tokyo Area….”

In March 1946 he reported as Gunnery Officer on the staff of the Commander in Chief, US Atlantic Fleet. He continued duty in that capacity unti November 1947, when he became Commander Destroyer Division Fifty One. Between April 1949 and July 1952 he was Head of the Undersea Warfare Section, Office of the Chief of Naval Operations, Navy Department, Washington, DC. He served as Commander Submarine Squadron Seven until August 1953, after which he attended the Naval War College, Newport, Rhode Island.

In July 1954 he became Chief of Staff to the Commander Carrier Division Fourteen and the spring of 1955 assumed command of USS Shenandoah. He was hospitalized from October 1955 until relieved of all active duty pending his retirement, effective April 1, 1956.