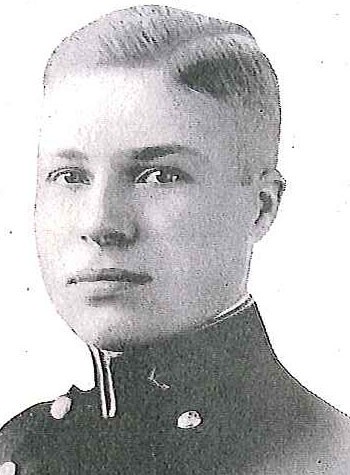 Captain Fitch was born September 17, 1895, at Washington, Nebraska, the son of John Wesley and Mrs. Fannie Gilmore Fitch. He was appointed to the U.S Naval Academy, Annapolis, Maryland, from the Third Congressional Ensign on June 6, 1918, with the Class of 1919, he advanced progressively through the various grades to the rank of Captain to date from June 20, 1942.

Following graduation from the Academy in 1918, Captain Fitch was assigned to the USS New Hampshire until July 1918, when he transferred to Destroyer Force, based on Brest, France, and was assigned to the USS Parker. In November 1919, he reported aboard the USS North Dakota and served in that battleship until May 1921, when he was detached and ordered to Eagle 33, for duty under instruction in submarines. Completing his instruction in July 1921, he reported aboard the USS K-4.

From August 1922 to June 1923, Captain Fitch commanded consecutively the USS K-5 and the USS N-2, with additional duty while in command of the USS N-2, as Commanding Officer of the USS K-7. He returned to the Naval Academy for postgraduate instruction in electrical engineering and upon completion of the course in June 1924, had duty under the cognizance of the Postgraduate School at the Navy Yard, Philadelphia, Pennsylvania; the Navy Yard, New York, New York; Columbia University, New York, New York; high power station in the vicinity of New York; the General Electric Company, Schenectady, New York; and the Westinghouse Electric Company, Pittsburgh, Pennsylvania. In September 1925, he reported aboard the USS Florida and on July 9, 1928, assumed duty on the Board of Inspection and Survey, Navy Department, Washington, DC. Following duty as Engineer Officer aboard the USS Whitney from June 1930 to May 1933, he served as an Inspector in the Department of Electrical Engineering at the Naval Academy until May 1936.

Completing a tour of duty as Engineer Officer of the USS New Orleans, in June 1938, Captain Fitch was transferred to the USS Chaumaut, as Executive Officer. He had duty at the University of California, Berkeley, California, in connection with the Naval Reserve Officers Training Corps Unit there, between August 1930 and June 1941, after which he reported to the Naval War College, Newport, Rhode Island, for instruction. He had further instruction aboard the USS Bullfinch from January to March 1942, followed by duty in connection with fitting out the USS Terror at the Fourth Naval District, Philadelphia, Pennsylvania. He assumed command of the Terror upon her commissioning in September 1942 and served in her until April 1944. For duty as Commanding Officer he was awarded the Bronze Star medal with the following citation:

“For meritorious service as Commanding Officer of the USS Terror, and as Officer in Tactical Command of a special Mine Laying Task Unit off Casablanca, French Morocco, November 16, 1942. Assigned the difficult and important task of enclosing an area sufficiently large to protect incoming and outgoing convoys from hostile submarines, following the initial assault landings of our forces at Casablanca, Captain (then Commander) Fitch capacity planned and supervised this extensive operation and , despite the constant threat of enemy submarine and air attacks and the lack of suitable navigational aids for night operations, and unfavorable tidal conditions, succeeded in laying approximately 2000 miles in record time. By his expeditious and efficient completion of his mission, Captain Fitch contributed directly to the success of the occupation of Morocco. His conscientious devotion to duty upheld the highest traditions of the United States Naval Services.”

In addition to the Bronze Star Medal and the Commendation Ribbon, Captain Fitch as the World War I Victory Medal, Escort Clasp; the China Service Medal; the American Defense Service Medal; the European-African-Middle-Eastern Area Campaign Medal; the Asiatic-Pacific Area Campaign Medal with one star; and the World War II Victory Medal. He also been awarded the Order of the British Empire, rank of Officer from the British Government.