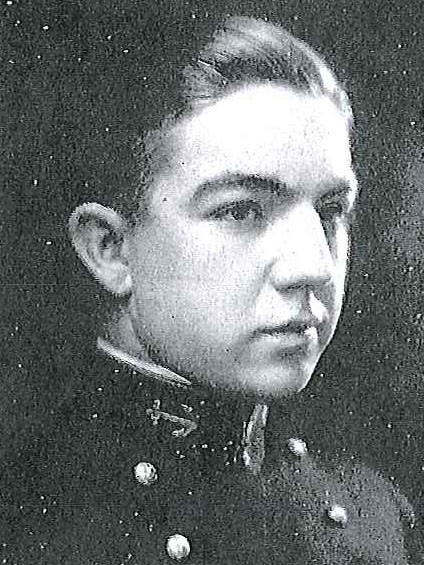 Beauford Wallace Fink was born in Bloomfield, Missouri on July 31, 1900. He attended grammar and high schools in Bloomfield, completed the sophomore year at University of Missouri, in Columbia, and entered the United States Naval Academy, Annapolis, Maryland, from Missouri in 1918. Graduated and commissioned Ensign in 1922, he advanced in grade to the rank of Commodore for temporary service on April 2, 1945. He reverted in rank to Captain on March 28, 1946, and was again promoted to Commodore upon transferring to the Retired List of the Navy on September 1, 1949.

Upon graduation in 1922, he served for ten months in the USS Arkansas as Assistant in the Gunnery Department. Transferring to the Naval Operations Base, Hampton Roads, Virginia, in January, 1923 he was Instructor, Naval Academy Preparatory Class. Upon completion of this duty in May, 1923 he transferred to duty as Officer-in- Charge of General Division of Trade Schools, Naval Training Station, Hampton Roads. In October, 1923 he reported aboard the USS Lardner, as Gunnery Officer. While attached to that destroyer, he was ordered ashore in Honduras as Officer-in-Charge of the ship’s landing party to protect American interests at Puerto Cortez and LaCeiba, Honduras.

In October, 1943 he returned to the United States, and was assigned duty as Officer-in-Charge of Construction for the District of Columbia area, which included duty as Public Works Officer of the Naval Air Station, Anacostia, DC; Naval Proving Ground, Dahlgren, Virginia; Naval Powder Factory, Indian Head, Maryland; U.S Naval Hospital, and Naval Observatory, Washington; and Consultant to the Commandant of the Naval Gun Factory, Washington, on matters of public works and construction. When detached in February, 1938, he was ordered to duty as Assistant Public Works Officer of the Navy Yard, Bremerton, Washington, with additional duty as Assistant District Public Work Officer, 13th Naval District, Seattle. In June, 1940 he had orders to duty as Resident Officer-in-Charge of Construction for all naval defense construction in the States of Washington and Oregon.

In May, 1941 he was ordered to duty on the staff of Commander, Mine Squadron 6, Base Force, Pacific Fleet, in connection with Advance Base planning. Upon completion of this secret assignment, he became Officer-in-Charge of Construction, Naval Operating Base and Naval Air Station, Bermuda. When this construction was well on the way to completion, and both base and station were in operation, he was detached, and from February to November, 1942 he had duty in the Navy Department, Bureau of Yards and Docks, as Assistant Director of the Construction Division, thereafter was Director of that division until October, 1943. He was awarded the Legion of Merit for that period of service, the citation stating in part:

“For exceptionally meritorious conduct in the performance of outstanding service…In charge of the distribution and expansion of the Advance Base Section of the Bureau of Yards and Docks, (he) also served as Advisor to the Chief of the Bureau and Vice Chief ad Chief of Naval Operations in matters pertaining to shore-based construction and the developing and equipping of Advanced Bases in the United States, Atlantic Ocean, Britain Isles, and Alaska… he contribution to the early completion of the large construction program of Naval and Civil Works facilities essential to the defeat of the devotion to duty reflect the highest credit upon Captain Fink and the United States Naval Service.”

He was assigned in October, 1943 to duty on the staff of Commander-in-Chief Pacific Fleet and Pacific Ocean Areas (Fleet Admiral C.W. Nimitz), as Head of the Construction Section, with the responsibility for planning the construction of all Advance Bases employed in the Central Pacific campaign. Headquarters were at Pearl Harbor initially, and later shifted to Guam. He remained on this assignment under Admiral R.H Spruance, who relieved Admiral Nimitz, until he was detached on February 1, 1946. He was awarded the Gold Star in Lieu of a second Legion of Merit “For exceptionally meritorious conduct… October 9, 1943 to September 1, 1945. As Chief of the construction section of Logistics Division, Commodore Fink applied his technical knowledge in the Engineering and Construction Planning of all advance Bases in the Pacific Ocean Areas; in the issuance of directive to top commanders covering the position of construction equipment and material; in the establishment of construction standards; and in the construction and successful establishment of all bases in this area…”

Returning from the Pacific in February, 1946 he assumed duty as Civil Engineer Officer in Command of the Naval Construction Battalion Center, Port Hueneme, California, and had additional duty as Officer in Charge of the Advance Base Depot, there, until September, 1947. He then reported to the Navy Department, and served as Assistant Chief of Bureau of yards and Docks for Plans and Research. He was so serving when his transfer to the Retired List of the Navy became effective, September 1, 1949.

Commodore Fink has membership in the Army-Navy Country Club, Arlington, and the Theta Chi Fraternity.