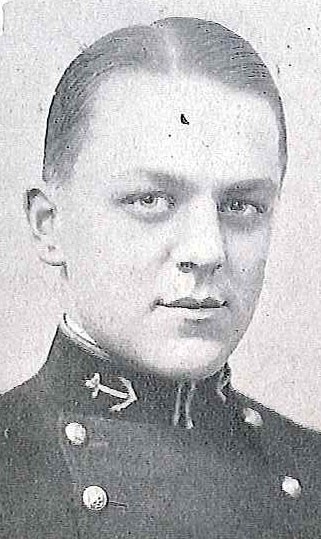 Frederic Aroyce Berry was born in Chicago, Illinois, on November 27, 1906, son of the late Frederic A. and Adelia Howell (Nelson) Berry. He attended James Wadsworth Grammar School and Hyde Park High School in Chicago and on July 20, 1923, entered the US Naval Academy, Annapolis, Maryland, on appointment as a Midshipman from Illinois. Graduated and commissioned Ensign on June 2, 1927, he subsequently advanced to the rank of Captain, his date of rank, March 20, 1945.

During the last six months in 1930 he again served in Nicaragua, this time as a member of the Electoral Mission to Puerto Cabezas. In July 1932 he reported to USS New Mexico, for duty as Watch and Division Officer. Six months later he was detached to be Commanding Officer of USS YT 119, operating in the Fourteenth Naval District, from Pearl Harbor, Territory of Hawaii. He remained at sea from June 1933 until May 1934 as Executive Officer of USS Tanager, after which he returned to Annapolis for instruction in Aerological Engineering at the Naval Postgraduate School. Continuing the course at the California Institute of Technology, he was awarded the degree of Master of Science in June 1937.

From July 1937 until June 1939 he was on board USS Yorktown, serving as Aerological Officer on the staff of Commander Carrier Division TWO. He then had similar duty at the Naval Air Station, Norfolk, Virginia, until January 1940, and for Fleet Air Wing FIVE for the five months to follow. In May 1940 he returned to the Naval Postgraduate School as Head of the Aerological Engineering Department. While there, during the early World War II period, he also served as Technical Advisor to the Bureau of Aeronautics, Navy Department, Washington, DC, in connection with Aerology Training Films and Pamphlets.

In March 1944 he joined the staff of Commander Aircraft SEVENTH Fleet, and throughout the remaining period of hostilities served as Aerological Officer and Assistant Chief of Staff for Administration and collaterally as Fleet Aerologist for the SEVENTH Fleet. He was awarded the Air Medal “For meritorious achievement in aerial flight in action against enemy Japanese forces in the Southwest Pacific War Area from December 21, 1944, to February 18, 1945 (during which period he) participated in six missions over a combat area…(and) contributed materially to the success of his flights…”

“For exceptionally meritorious conduct…as Aerological Officer, SEVENTH Fleet, during operations against enemy Japanese forces in the Southwest Pacific War Area from May 1944 to July 1945…” he was awarded the Legion of Merit with Combat “V.” The citation states that he “ably planned for and met all Aerological requirements of the SEVENTH Fleet during this period of intensified operations against the enemy…(and) greatly facilitated search and strike operations, thereby contributing materially to preventing much possible damage or losses to our forces…”

In September 1945 he reported to the Office of the Chief of Naval Operations, Navy Department, and thereafter, until June 1950, has duty as Officer in Charge, Navy Weather Central, Washington, DC. In July of that year he joined the staff of Commander Aircraft, Atlantic Fleet, and for three years served as Officer in Charge, Fleet Weather Central, Norfolk, Virginia, with additional duty from January 1952 as Force Aerologist, Air Force, US Atlantic Fleet.

In June 1953, he was transferred to duty as Officer in Charge, US Fleet Weather Central, Norfolk, Virginia, and from that time also served as Force Aerologist, for Commander Aircraft, Atlantic, and Officer in Charge, Bureau of Aeronautics Research Project AROWA. Under orders of September 14, 1954, he is currently Chief Scientific Advisor, President’s Advisory Committee on Weather Control, Washington, DC.

He is co-author of “Handbook of Meteorology” (McGraw-Hill, 1945), used as standard reference by the majority of meteorological services of the world. He is Vice-President, Commission of Synoptic Meteorology, World Meteorological Organization (1953-1957). He is also a member of the American Meteorological Society, the Institute of Aeronautical Sciences, and the American Geophysical Union.