Tanager I (Minesweeper No. 5) 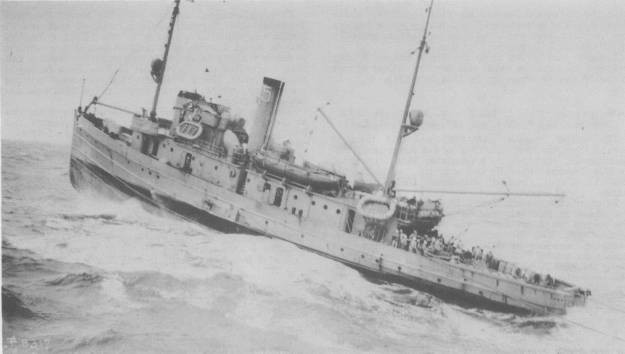 Any of the numerous American, passerine birds. The brightly colored males are unmusical and inhabit woodlands.

After operating locally out of Boston through the late summer of 1918, Tanager, in company with Western King, departed New London, Conn., on 26 September, bound for the Azores. The minesweeper subsequently operated out of Punta Delgada on local escort duties with the Azores detachment through the fall, before pushing on toward Portugal and reaching Lisbon on the day after Christmas 1918. Later in her tour in European waters, she delivered a case of serum to Georgia (Battleship No. 15) which apparently was trying to combat an outbreak of influenza.

In the spring, Tanager was assigned to the Minesweeping Detachment established to clear the North Sea Mine Barrage from between the shores of Scotland and Norway and arrived at Kirkwall, Scotland, on 7 May 1919. The barrage-which had been laid during World War I to prevent a sortie by the German High Seas Fleet and forays by German U-boats-now prevented the resumption of the commercial shipping which had criss-crossed the North Sea before the war.

While sweeping Group 9, the third operation conducted by the mine force, Tanager suffered damage in heavy weather and was forced to put into Kirkwall for a week of repairs. Besides the hazards posed by Neptune in the stormy North Sea, the mines provided their own particular brand of danger. While sweeping Group 10 late in June, Tanager fouled a mine in one of her "kites"; and it exploded close aboard, again forcing the ship to limp to Kirkwall for repairs. The severity of her damage required a period in the Admiralty dock at Chatham.

By late summer, the barrage had been swept. In company with other vessels of her squadron, Tanager sailed for the United States on 1 October and, after stops at Brest, France; Lisbon; and Hamilton, Bermuda, arrived at New York on 19 November. For part of the voyage, from Lisbon to Hamilton, she towed SC-272.

Upon completion of permanent repairs at Charleston, S.C., Tanager was assigned to the Pacific Fleet in December 1919. She was reclassified AM-5 on 17 July 1920. The minesweeper steamed to the Hawaiian Islands and operated out of Pearl Harbor from 1920 to 1941. Her services for the Fleet included target-towing, participation in mine-laying and minesweeping exercises, and transportation of men and mail. In addition, she took part in scientific expeditions to the Necker and Nihoa Islands in the Hawaiian chain and operated briefly at Wake Island in the summer of 1923 during an ornithological survey. In August 1925, she served on a plane guard station for the PN flying boats' unsuccessful flight from the west coast to Hawaii.

Her routine duties at Pearl Harbor were twice interrupted. In early 1928, she was assigned duty as station ship at Pago Pago, Samoa; and, late in March, she unsuccessfully attempted to free SS Steelmaker, aground on Mitchell Island. In 1930, Tanager operated between Mare Island and San Diego, Calif., for a time, towing and assisting in the preparation of many decommissioned flush-deck, four-pipe destroyers for inactive berthing at the Destroyer Base at the latter place.

In early 1941, Tanager received a major overhaul which transformed her silhouette. Her heavy foremast and boom were removed; splinter-shielding was added around her guns and upper bridge; and a depth-charge track was fitted astern. Thus outfitted, she lost excess topside weight and now had better fields of fires for her antiaircraft battery. Assigned to Mine Division 9, Asiatic Fleet, Tanager sailed from Pearl Harbor on 11 May 1941, bound for the Asiatic Station. The minecraft proceeded via Guam to the Philippines. En route, she plane-guarded for two PBY's being flown out as reinforcements for Admiral Thomas C. Hart's air patrol forces.

Calling at Guam from 29 to 30 May, Tanager arrived at Manila on 5 June. She commenced local operations almost immediately and, for the next few months, made patrols off the Corregidor minefields; towed targets for destroyer and submarine exercises; and conducted minesweeping and minelaying duties. From October through December, Tanager participated in the laying of an antisubmarine net across Mariveles Bay, Bataan, a difficult operation accomplished in spite of the fact that there were no specialized net-laying craft in the Philippines.

On 8 December 1941 (7 December east of the International Date Line), Japanese planes struck Pearl Harbor and plunged the United States into the Pacific War. On the next day, Japanese planes destroyed General Douglas MacArthur's Far Eastern Air Force on the ground on its Philippine fields and struck the Cavite Navy Yard on the 10th. Tanager lay alongside Machina Wharf when the high-level bombers came over dropping their lethal loads. In the ensuing holocaust, the minesweeper managed to leave the area. Others were not so fortunate. Bittern (AM-36) was wrecked; Sealion (SS-195) was sunk alongside a pier; and Peary (DD-226) and Pillsbury (DD-227) were damaged. More importantly, Cavite was destroyed as an operating base for the Asiatic Fleet.

With Cavite out of commission and Manila declared an "open city" on Christmas Day 1941, American and Filipino forces withdrew to Bataan and Corregidor. Tanager carried the equipment and staff of the Commandant, 16th Naval District, Rear Admiral Francis W. Rockwell, out to the "Rock" during his withdrawal; and she subsequently operated out of Corregidor on inshore patrol duties. In ensuing months, Tanager and her dwindling number of sister ships and former China river gunboats lived a furtive, hunted existence. Tanager served almost until the bitter end. On 4 May 1942, the day of the commencement of the Battle of the Coral Sea, the minesweeper was hit by shore battery fire from Japanese guns emplaced on Bataan. Mortally hit, she sank off Corregidor that day.

Tanager was struck from the Navy list on 8 May 1942 and received one battle star for her valiant service in the Philippine campaign in 1941 and 1942.