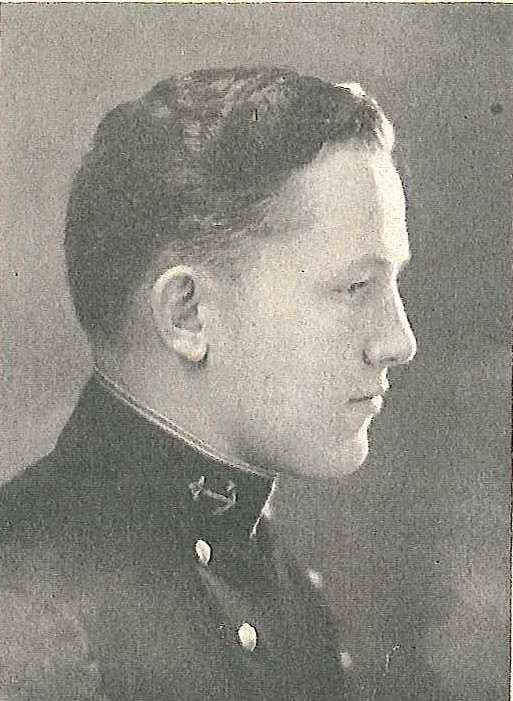 Marvin Pabodie Evenson was born on October 14, 1904, at St. Peters, Minnesota, son of George Marin Evenson and Mrs. Alice Clarissa (Pabodie) Evenson. He attended Sioux City, Iowa, High School before entering the US Naval Academy, Annapolis, Maryland on appointment from Iowa in 1922. Graduated and commissioned Ensign on June 3, 1926, he subsequently attained the rank of Captain on August 7, 1947 to date from August 1, 1943.

Following graduation from the Naval Academy in June 1926, he remained there for instruction in aviation until August of that year. He reported the next month to USS Marblehead and in March 1928 was transferred to USS Pittsburgh as Assistant Gunnery Officer while that cruiser operated as Flagship of the Asiatic Fleet. From July 1929 until April 1930 he served as Communications and Assistant Gunnery and Torpedo Officer of USS Sicard, a unit of Division 45, Destroyer Squadron, Battle Fleet. He had flight training at the Naval Air Stations, Hampton Roads, Virginia and Pensacola, Florida from April 1930 until January 1931, being designated Naval Aviator during that period.

After duty in the battleship Arizona operating with Battleship Division 3, Battle Force from February 1931 until May 1933, he returned to the Naval Academy where he was on duty until June 1934. He then served until January 1940 as a pilot of Fighter Squadron 2, based on USS Lexington; of patrol Squadron 10 at Fleet Air Base, Pearl Harbor; and of Bombing Squadron 7 at the Naval Air Station, Fleet Air Division Norfolk, Virginia. Reporting to the Naval Inspector of Machinery, Bethlehem Steel Company, Quincy, Massachusetts, he assisted in fitting out USS Wasp as a prospective pilot.

During the period immediately prior to World War II he served successively aboard the aircraft carriers Wasp after her commissioned in April 1940, and the Yorktown from June until October 1941 while she operated with Aircraft, Atlantic Fleet. Ten Months duty in the Office of the Commandant, Twelfth naval District, was followed by an assignment swith Commander Fleet Air, West Coast, and Commander Western Sea Frontier, as Commander Air Task Group, Southern Sector, until March 1943; Commanding Officer of Acorn Training Detachment, Port Hueneme, California to April 1944; and as Commander Air Center SHAG from April to June 1944.

Captain Evenson was awarded the Air Medal (by the Army) and Gold Stars in lieu of the Second, Third, and Fourth Air Medals for meritorious achievement in aerial flight as a pilot of a plane operations against the Japanese in the Solomon Islands Area during the period July 27, 1943 to February 26, 1944. For “heroism and extraordinary achievement” in the same area February 29, 1944 to May 24, 1944, completing his twentieth mission, he was awarded the Distinguished Flying Cross.

In June 1944 he reported to the Army Air Forces School of Applied Tactics, Orlando, Florida, and completing that course had further instruction at the Army-Navy Staff College, Washington, DC. He was ordered in November 1945 to the West Coast for temporary duty with Fleet Air, Alameda, California, pending further assignment. On January 21, 1946, he was designated Commanding Officer of USS Hoggatt Bay (CVE 75), and continued in command until June of that year. In August he reported for duty on the staff of the Commandant, National War College, Washington, and DC, where he remained until June 1948. He then joined the staff of Commander Carrier Division 4, as Chief of Staff and Aide.

In June 1949 he was assigned to the Joint Staff office, Joint Chiefs of Staff, Washington, D.C., serving there until May 1951, when he assumed command of USS Cabot. Detached from command of that vessel, he reported in June 1952 as Chief of the Naval Section, United States Military Mission to Brazil, with headquarters in Rio de Janeiro. In June 1954 he was ordered to return to the United States for duty as Professor of Naval Science, naval Reserve Officers Training Corps Unit, University of Missouri, at Columbia.