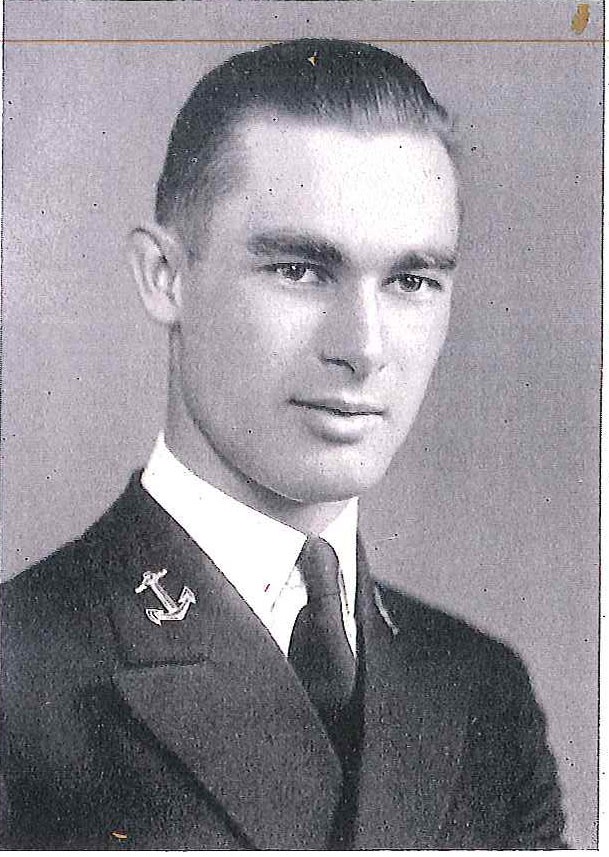 Stanley Edgar Ellison was born in Reading, Massachusetts, on June 14, 1916, son of Louis E. and Bessie Maxwell (Parker) Ellison. He graduated from Reading High School, then enlisted, on December 18, 1933, in the US Navy. He had recruit training at the Naval Training Station, Norfolk, Virginia until March 1934, then joined USS New York. Detached from that battleship in September 1935, he next attended the Naval, Academy, Annapolis Maryland, on appointment from his native state in 1936 and on June 6, 1940 was graduated and commissioned Ensign. Advancing progressively in rank, he subsequently attained that of Captain, to date from April 1, 1959.

Following graduation from the Naval Academy in 1940, he joined USS Savannah and was serving in that vessel when the United States entered World War II, December 9, 1941. He subsequently saw action during the North African invasion, the invasion of Sicily at Gila and the Salerno invasion. The Savannah was damaged on September 11, 1943, during the latter engagement, by a hit from a German radio controlled bomb. Detached from that light cruiser in January 1944, he next had flight training at the Naval Air Station, Dallas, Texas. He continued training, July-November 1944, at the Naval Air Station, Pensacola, Florida, and on November 14, 1944 was designed Naval Aviator.

He had advanced training and served as an Instructor at the Naval Air Station, Jacksonville, Florida, and in October 1945 joined USS Kenneth Whiting to serve as Air Officer and Senior Watch Officer. During the period December 1945 to June 1947 he was Assistant Operations Officer, Task Force Navigator, Gunnery Officer and Unit Training Officer on he Staff of Commander Fleet Wing ONE, after which he had instruction in aeronautical engineering at the Postgraduate School, Annapolis, Maryland. He continued the course at Massachusetts Institute of Technology at Cambridge from which he received the degree of Master of Science in aeronautical engineering (instrumentation) in June 1950.

He had further training until December 1950, then joined Patrol Squadron EIGHT and Executive Officer. In August 1952 he assumed command of that squadron, serving as such until October 1952, after which he had duty as Aircraft Ordnance Stores Officer and Projects Manager at the Naval Aviation Ordnance Test Station, Chincoteague, Virginia. He remained there until October 1955, when he reported as Executive Officer of USS Valcour. Detached from that seaplane tender in October 1956, he next served as Assistant Operations Officer on that Staff of Commander Fleet Air Wings, Atlantic and Commander Fleet Air Wing FIVE.

In August 1958 he reported for instruction at the Industrial College of the Armed Forces, Washington, DC, and upon completing the course in July 1959, was assigned to the Bureau of Ordnance, Navy Department, Washington, DC. That Bureau was combined with the Bureau of Aeronautics in January 1960 and designated the Bureau of Naval Weapons, and he servedas Special Assistant in the Missiles, Astronautics and Ammunition Division in that newly-created Bureau until June 1962. He was in command of the US Naval Station, Keflavik, Iceland, until ordered detached in July 1964 for duty in the Officer of Naval Material, Navy Department.