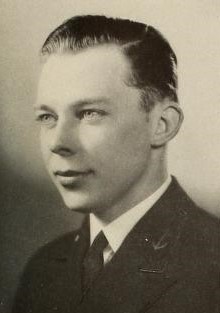 Commander Flenniken, who was born in East Liverpool, Ohio, February 13, 1914, graduated from Hamburg High School, Hamburg, New York, before his appointment to the Naval Academy from New York’s Forty Second Congressional District. He was graduated from the Academy and commissioned Ensign on June 3, 1937, and his successive steps in rank were: Lieutenant (jg), June 1940; Lieutenant, June 1, 1943; and Commander on October 2, 1947, to rank from June 14, 1942.

Following graduation from the Academy, Commander Flenniken’s first sea duty was in the USS Idaho from June 30, 1937 to June 1, 1939. Then followed instruction at the Submarine Base, New London, Connecticut, after which he had duty aboard the USS S-4, from December 1939 to February 1943. For service in this submarine during her first four war patrols, he was awarded the Silver Star Medal with the following citation:

“For conspicuous gallantry and intrepidity while serving successively as Diving Officer, Assistant Approach Officer, and Executive Officer on board the USS-44, during the first four War Patrols of that vessel in enemy Japanese- controlled Pacific waters, from April 24 to August 23, 1942. By his expert control of depth, maintenance of ship’s equipment and skill in organizing the crew for maximum fighting efficiency, Commander (then Lieutenant Commander) Flenniken rendered invaluable assistance to his commanding officer in pressing home aggressive attacks to sink a heavy cruiser and inflict extensive damage on other enemy shipping despite serve hostile countermeasures. His leadership and devotion to duty throughout reflect the highest credit upon Commander Flenniken and the United States Naval Service.

In February 1943, Commander Flenniken reported to the Electric Boat Company, Groton, Connecticut in connection with fitting out the USS Bluefish, and assumed duties aboard that submarine upon her commissioning on May 24, 1943. While serving as Diving Officer aboard the Bluefish during her first war patrol he was awarded a Gold Star in lieu of a second Silver Star Medal with citation as follows:

Gold Star in lieu of a Second Silver Star Medal:

“For gallantry and intrepidity in action as Diving Officer of the USS Bluefish, during the Frist War Patrol of that vessel in enemy Japanese-controlled waters in the Southern Celebes Area, from September 9 to October 4, 1943. Precisely controlling depth, Commander (then Lieutenant Commander Flenniken rendered valuable assistance of his Commanding Officer in conducting attacks which resulted in sinking more than 15,000 tons of enemy shipping and in damaging over 6, 000 tone, thereby contributing materially to the success of his vessel. His courage, skill and devotion to duty were in keeping with the highest traditions of the United States Naval Service.”

Completing two months duty with Submarine Squadron SIXTEEN, Commander Flenniken reported in December 1943 to the USS Kingfish. He served aboard that submarine until April 1944, when he was transferred to duty as Engineer and Maintenance Officer on the staff of Commander Submarine Squadron Eight. This duty, ending in May 1945, was followed by brief duty on the staff of Commander Training Command, Submarine Force, Pacific Fleet. On July 27, 1945, he was ordered to the Boston Naval Shipyard, Boston, Massachusetts, from which port he served as Executive Officer of the USS Holland, and later as Commanding Officer of the USS Shoshone.

On August 19, 1947, Commander Flenniken was ordered to duty as Commanding Officer of the USS Donner. Relived in July 1949, he assumed command on August 12 of the USS Forrest B. Royal, his present assignment.

In addition to the Silver Star Medal with Gold Star and the Navy Unit Commendation Ribbon (awarded the officers and men of the submarine USS-S-44), Commander Flenniken has the American Defense Service Medal, Fleet Clasp; the American Campaign Medal; the Asiatic-Pacific Campaign Medal; and the World War II Victory Medal.