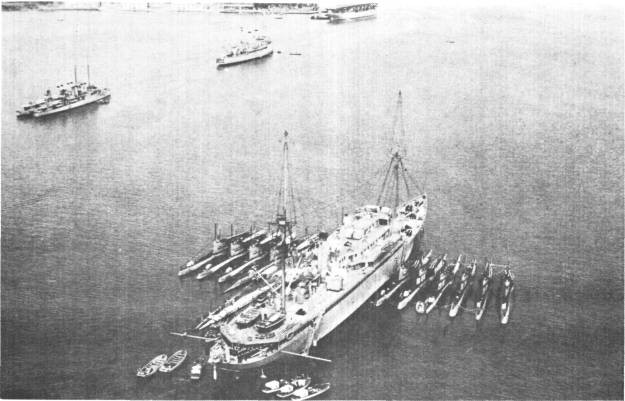 Caption: USS Holland (AS-3) with submarines alongside at San Diego circa 1927, USS Langley (CV-1) appears at North Island with USS Shawmut (CM-4) astern of the carrier. The nearest destroyer on the left is USS Edsall (DD-219).

Holland arrived in San Francisco from Puget Sound Naval Shipyard on 24 April to become flagship of Captain J. T. Thompkins, Commander Submarine Divisions, Battle Fleet. On 24 September she was permanently assigned to base at San Diego, Calif., tending submarine divisions there with periodic tours to Panama to service submarines based at the Canal Zone. On 5 November 1930 Holland became flagship of Captain Chester W. Nimitz, Commander Submarine Divisions, Battle Fleet with additional duty as Commander of Submarine Division 20. The former command was abolished as of 1 April 1931 and Captain Nimitz retained his flag in Holland as Commander, of his submarine diyision, now designated Submarine Division 12. He left Holland on 17 June, relieved by Captain W. L. Friedell.

On 22 November 1941 Holland arrived at Cavite Naval Base, P.I., to service submarines of the Asiatic Fleet. Due 'to the air raids in early December 1941, Holland was hurried out of Manila Bay under cover of night with her vital cargo of repair and replacement parts for submarines of the Asiatic Fleet. Heading south, she escaped unscathed from two air raids while at Balikpapan, Borneo, then repaired a battle-damaged submarine at Soerabaja, Java where she was joined by two destroyers that gave her escort to Port Darwin, Australia, which she reached on 2 January 1942 for round-the-clock operations which included the building of docks and floats as well as the constant repair and equipping of ships as well as submarines. On 3 February she was underway for Tjilaljap, Java, to remove Rear Admiral Charles A. Lockwood, Jr., and his Asiatic Fleet Submarine Force Staff to Australia. Her outstanding service to the Fleet during the first crucial months of the war brought Holland a Navy Unit Commendation.

While based in Australia, Holland serviced and overhauled several submarines before returning for overhaul at Mare Island Navy Yard in late February 1943. She reached Pearl Harbor from the West Coast in June and completed 22 refits and 13 repair jobs for submarines within the next 11 months. She shifted to Midway Atoll on 1 June 1944 and sailed the following month directly to support submarines in the Marianas Islands. Holland returned to Pearl Harbor late in November to be fitted out as headquarters ship for Vice Admiral Charles A. Lockwood, Jr., Commander Submarine Force, Pacific Fleet. In January 1945 she steamed out of Pearl Harbor for Guam where she embarked Vice Admiral Lockwood. By the close of hostilities, Holland had given 55 instances of refit to submarines, provided repair and service to 20 surface craft and completed various jobs on shore installations.

Vice Admiral Lockwood shifted his Submarine Force Flag ashore to his new quarters on Coconut Island in Apra Harbor on 30 August 1945, setting up operations and communications for the work ahead. This left Holland ready to begin a new career as a repair ship (ARG-18). Her value to the submarine force had diminished with the commissioning of many new and modern tenders better equipped to carry on the job of keeping our submarines in condition for their assaults against the enemy. With a few alterations she headed for Buckner Bay, Okinawa, where she embarked Rear Admiral Allen B. Smith, Commander of Service Squadron 10 and his staff before proceeding for Tokyo Bay where she dropped anchor on 29 September 1945.

Holland set course 6 June 1946 by way of Pearl Harbor for San Diego where she arrived on 28 June. She shifted to San Pedro for inactiviation overhaul in the Terminal Island Navy Yard, then was towed to San Diego where she was decommissioned on 21 March 1947. She was assigned to the San Diego, Calif., group of the Pacific Reserve Fleet until her name was struck from the Navy Register on 18 June 1952. Her hull was sold for scrapping on 3 October 1953 to the Bethlehem Steel Co.