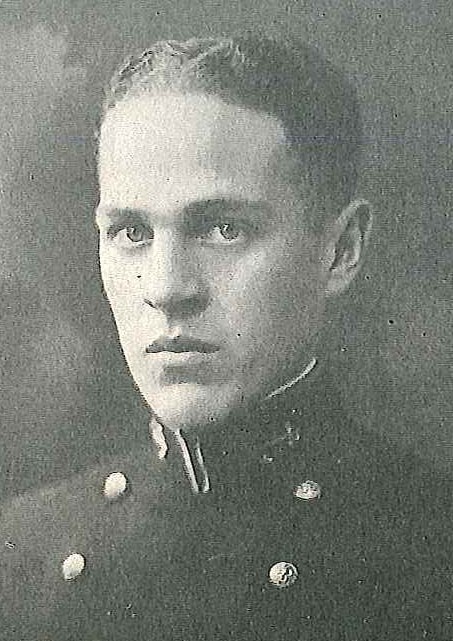 Commander Carpenter was born on January 29, 1904, in New York, New York, the son of William E. Carpenter and Mrs. Christine Hubbard Carpenter. He attended the Kew Forest High School, Flushing, New York, and the Army-Navy Preparatory School, before his appointment to the US Naval Academy, Annapolis, Maryland, from June 3, 1926, he attained the rank of Commander to date from December 30, 1941. He was appointed Captain, for temporary service, to rank from November 15, 1945, reverting to Commander on January 1, 1948.

Following graduation in 1926, Commander Carpenter remained at the Academy for the short course in aviation and in September 1926 joined USS Florida. Detached from the Florida in June 1928, he proceeded to the Submarine Base, New London, Connecticut, for the course in submarine. He was under instruction there between July and December 1928, after which he reported to Commander, Submarine Division Eight, and was assigned to USS S-8. Continuing service in the S-8 until May 1930, he had consecutive duty in USS O-9 and USS Houston.

Commander Carpenter served aboard USS S-41 for a month, during June and July 1941, and thereafter joined USS S-30 for another month’s duty. He reported aboard USS Beaver in August 1931, serving in that auxiliary submarine tender until detached in May 1933, for duty at the Naval Training Station, Hampton Roads, Virginia. In June 1935, he was assigned to USS Fox and from October 1938 to April 1940, had service at the Bethlehem Steel Company, Shipbuilding Division, Quincy, Massachusetts. Duty in connection with fitting out USS Walke, at the Navy Yard, Boston, Massachusetts, followed. He was detached in April 1941, before that destroyer was commissioned and assigned to USS Mississippi as Assistant Gunnery Officer and later Gunnery Officer.

Relieved of duty aboard the USS Mississippi in May 1944, Commander Carpenter reported to the Amphibious Training Command, US Atlantic Fleet for further assignment. In September 1944 he assumed command of LSM Flotilla Five and for meritorious service while commanding that amphibious group was awarded the Bronze Star Medal and a Gold Star in lieu of a Second Bronze Star Medal with the following citation:

“For meritorious achievement as Commander of LSM Flotilla Five during the assault and capture of Iwo, Jima, Volcano Islands from February 19 to March 3, 1945. Handicapped by heavy seas and high winds which made the handling and beaching of LSMs extremely difficult and caused them considerable damage, Captain (then Commander) Carpenter capably directed his ships in landing troops, supplies and equipment onto beaches under intense enemy fire. By his rapid and efficient evacuation of casualties he contributed materially to the saving of many lives. His aggressive leadership, sound judgment and untiring devotion to duty throughout this period were in keeping with the highest traditions of the United States Naval Service.”

“For meritorious service as Commander of a Flotilla of Landing Ships during operations against enemy Japanese forces prior to and during the amphibious assault of Okinawa from March to April 1945. Exercising great initiative and professional ability, Captain (then Commander) Carpenter skillfully organized and directed the employment of his group in the landing of assigned troops on enemy-held beaches and, in the face of intermittent air attacks and hostile mortar and major caliber artillery fire during the assault phase of this operations, courageously supervised the beaching and unloading of his ships at the objective. By his leadership and devotion to duty, he contributed materially to the success of the Okinawa campaign, and his actions throughout were keeping with the highest traditions of the United States Naval Service.”

Returning to the United States, Commander Carpenter commanded the Fleet Training Group, New York, New York, from January 1946 to February 1947. Thereafter he was assigned to the Planning Section of the Hydrographic Officer, Navy Department, Washington, DC during September and October 1947 he had temporary duty in the Bureau of Naval Personnel, Navy Department, after which he was assigned to the Naval Examining and Naval Retiring Board, Washington, DC.