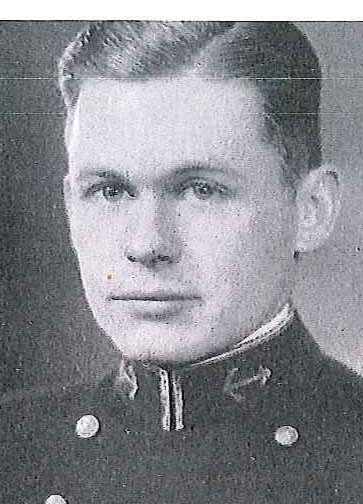 James Dugue Ferguson was born in Baltimore, Maryland, August 28, 1910, son of James F. and Mary (Trenholm) Ferguson. He attended Severn School, Severna Park, Maryland and on June 21, 1928 enlisted in the US Navy. He was honorably discharged on July 1, 1929 to accept an appointment from his native state to the US Naval Academy, Maryland. Graduated on June 1, 1933 he was not commissioned in the US Navy until the next year (July 12, 1934). He subsequently advanced in rank attaining that of Captain, to date from July 1, 1952.

His first assignment after receiving his commission in 1934 was on board USS Detroit. In August 1936 he transferred to USS Broome and for two years, June 1937-June 1939, served in USS Helm. He was attached to the battleship Nevada, tied up at Pearl Harbor, Territory of Hawaii, when the Japanese attacked the Naval Base there on December 7, 1941. Badly damaged during the attack, the Nevada was refloated in February, temporarily repaired at Pearl Harbor and then steamed to Bremerton, Washington for more complete repairs and modernization. By early 1943 she was again ready for battle and subsequently participated in operations in the Attu Kiska area.

“For meritorious service as Air Defense Officer of USS Nevada during the period following the Japanese attack on Pearl Harbor…” he received a Letter of Commendation, with authorization to wear the Commendation Ribbon, from the Commander in Chief, U.S. Pacific Fleet. The citation further states in part: “He designed and developed an instrument for control of antiaircraft batteries. The design of this instrument has been adopted by the bureau of Ordnance and has been installed on Fleet vessels. His superior ability and tireless effort in making so valuable a contribution to the successful prosecution of the war against Japan were an inspiration to the officers and men of his ships…”

Detached from the Nevada in November 1943, he next had duty on the on the Fire Control Desk on the Bureau of Ordnance, Navy Department, Washington, DC. He was given a Letter of Commendation, with authorization to wear the Bronze Star on his Commendation Ribbon, by the Secretary of Navy for “outstanding performance of important duties… (while in that assignment) from October 1943 to August 1945. As a key member of the staff of the Fire Control Section of the Fleet Maintenance Division, Commander Ferguson was responsible for a complete reorganization of procedures for the maintenance of 85, 000 lead-computing antiaircraft sights in the Fleet. His foresight, administrative ability and technical competence resulted in a tremendous improvement in the performance of lead-computing sights under the difficult conditions in combat theater…”

In September 1945 he reported as Executive Officer of USS Denver and later commanded that cruiser until she was decommissioned at the Philadelphia (Pennsylvania) Naval Shipyard in October 1946. He then assumed command of USS Henry W. Tucker. Under his command that radar picket destroyer operated in the Japan, China and Eniwetok areas and executed an armed landing at Goose Point, Shantung Province against Chinese Communists in an effort to rescue Marine pilots who had been forced down.

From July 1948 until August 1950 he was Training Officer on the staff of Commander Fleet Training Group, San Diego, California, after which he again had duty in the Korean area as Operations Officer on the staff of Commander Destroyer Flotilla Three. Continuing service in destroyers, he served from October 1951 until March 1952 as Commander New London Group, Operational Development force.

He was Research Division Superintendent at the Naval Research Laboratory, Washington, D.C., until August 1954 and after completing instruction at the Industrial College of the Armed Forces, reported in July 1955 as Commanding Officer of USS Rankin. Detached from that vessel in September 1956 he became Director of the Plans Division in the Bureau of Naval Personnel, Navy Department. In July 1958 he assumed command of the cruiser Salem and when she was decommissioned he transferred in February 1959 to command of the cruiser Newport News. In April, that year, he was ordered to the Staff of Commander of Chief, Atlantic Fleet, and two years later became Commander Fleet Training Group, Guantanamo Bay. In April 1963 he was designated Commanding Officer of the Naval Station, Norfolk, Virginia.