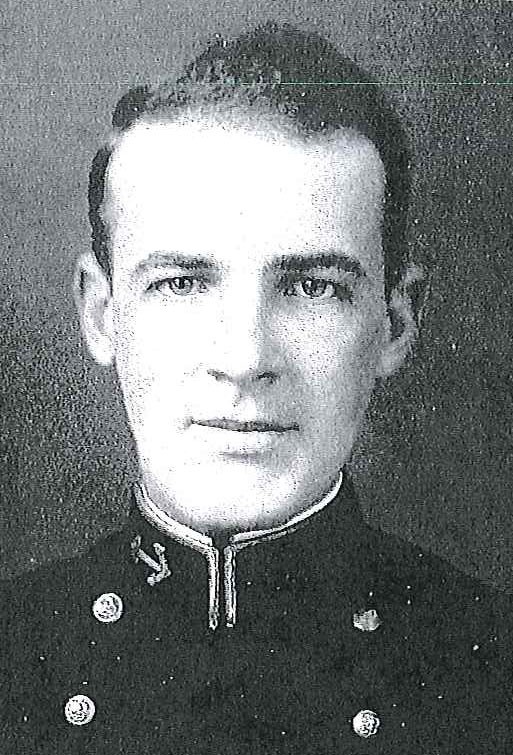 Ralph William Arndt was born in Michigan City, Indiana on December 10, 1912, son of William A. and Mamie Holsing Arndt. He enlisted in the US Naval Reserve on July 15, 1929, and on June 19, 1932, was honorable discharged to enter the US Naval Academy, Annapolis, Maryland, after winning a competitive appointment. As a Midshipman he was a member of the Rifle Team, the Trident Literary Society, the “Lucky Bag” Staff, won his letter in Soccer, and was Regimental Adjutant as a First Classman. Graduated and commissioned Ensign on June 4, 1936, he subsequently adbanced{sic} to rank of Captain, to date from July 1, 1955. He was retired in that rank in July 1, 1962.

Following graduation from the Naval Academy in June 1936, he joined USS New Mexico, and served as a junior division officer in that battleship in the Pacific area for more than two years. In January 1939 he was detached with orders to the Naval Air Station, Pensacola, Florida, where he completed flight training and was designated Naval Aviator on January 12, 1940. In February of that year he was assigned to Bombing Squadron 3, based on USS Saratoga, later USS Enterprise, and was serving as Engineer Officer of that squadron when the United States entered World War II in December 1941.

For “meritorious achievement…as Pilot of a Dive-bombing Plane in Bombing Squadron THREE…during operations against enemy Japanese forces in the Central and Western Pacific Ocean Area from December 9, 1941, to April 20, 1942…” he was awarded the Air Medal. He is also entitled to the Ribbon for the Presidential Unit Citation awarded USS Enterprise, “For consistently outstanding performance and distinguished achievement during repeated action against enemy Japanese forces in the Pacific War Area, December 7, 1941 to November 15, 1942…(which closes with) Her aggressive sprit and superb combat efficiency are fitting tribute to the officers and men who so gallantly established her as a solid bulwark in defense of the American Nation.”

Returning to the United States, he served between July 1942 and February 1944 as Dive Bombing and Gunnery Instructor at the Naval Air Station, Miami, Florida, and in March 1944 commissioned and briefly commanded Bombing Squadron 15. He reported next for duty with the Pre-commissioning detail of USS Makassar Strait, at the Naval Station, Astoria, Oregon, and served as Air Officer of that vessel from her commissioning until December 1944. He then joined the Staff of Commander Air Support Control Units, Amphibious Forces, US Pacific Fleet.

“For meritorious service as Net Control Officer of an advance Attack Force during the amphibious assault on Iwo Jima in February and March 1945, and as Operations Officer and Support Air Direction Net Control Officer during the Okinawa Campaign from April 1 to June 3, 1945…” he was awarded the Bronze Star Medal with Combat “V.” The citation continues:

“During the Iwo Jima operation, (he) ably controlled numerous air strikes against enemy shore establishments. Coordinating all air activities in support of ground troops at Okinawa as well as air strikes on the Japanese Homeland, he contributed materially to the destruction of many hostile shore installations and to the neutralization of enemy air activity…”

He continued as Commanding Officer of the Air Support Control Unit on the Staff of Commander Third Amphibious Force, in planning and implementing the final landings in the mop up of the Philippine Islands. After the armistice his unit accompanied occupation troops into Nagasaki, Sasebo, Wakayama, and Yokohama, Japan.

In December 1945 he was assigned to the Office of the Chief of Naval Operations, Navy Department, Washington, D.C. There he worked on the post war rewrite of tactical and doctrinal publications. In October 1946 he was transferred to the Administrative Office of the Navy Department, for duty with the Joint Research and Development Board (Planning Division of the Navy Secretariat). And remained there until July 1947. He next attended the Naval Postgraduate School, and was awarded a Bachelor’s Degree in Aeronautical Engineering in 1949, and from the University of Minnesota received the degree of Master of Science in Aeronautical Engineering in 1950.

In September 1950 he assumed command of Tactical Air Support Squadron ONE, which operated in Korea and Korean waters until July 1951. He was awarded a Gold Star in lieu of the Second Bronze Star Medal, with Combat “V,” for “exceptionally meritorious service…in connection with naval operations against the enemy while serving as Commander Tactical Air Control Squadron NINETY from December 11 to December 24, 1950, during the planning and execution of amphibious operations at Hungnam, Korea…”

He joined USS Bataan in November 1951, and as Executive Officer of that aircraft carrier completed two additional tours of duty in the Korean Theater, thereby winning eight operation stars for his Korean Service Medal. From June 1953 until May 1957 he served as Officer in Charge of the Aeronautical Angineering[sic] Curricula at the US Naval Postgraduate School, Monterey, California, then was designated Chief Navy Section, Military Advisory Assistance Group, France, with HEADQUARTERS AT Paris. On February 26, 1960, he was ordered to return to the Naval Postgraduate School for duty as Commanding Officer, Naval Administrative Command. On July 1, 1962, he was transferred to the Retired List.