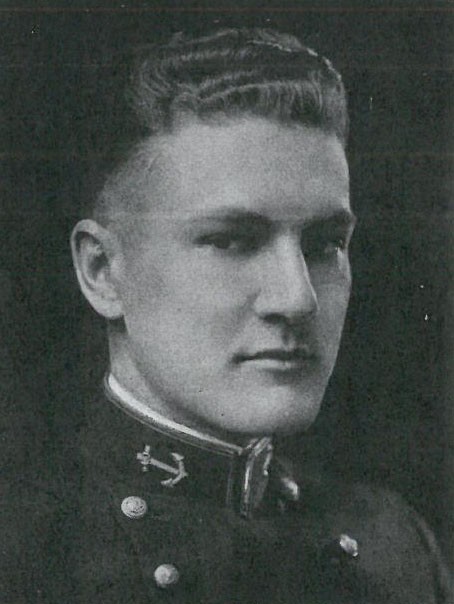 Harold Davies Baker was born in Baltimore, Maryland, on April 7, 1899, son of Albert and Mary Davies Baker. He attended Baltimore Polytechnic Institute, from which he was graduated in 1916, and on June 12, 1918 entered the US Naval Academy at Annapolis, Maryland. Graduated and commissioned Ensign on June 2, 1922, he subsequently advanced to the rank of Captain, to date from June 21, 1942. On December 1, 1948, the President approved his selection to the rank of Rear Admiral, his date of rank July 1, 1948.

Following graduation from the Naval Academy in June 1922, he was assigned to USS North Dakota, and served for a year in that battleship, operating with Division 5, battleship Squadron 3, Atlantic Fleet. Following torpedo instruction at the Torpedo School, Newport, Rhode Island, in 1923, he served as torpedo officer of USS Colorado, a unit of Division 5, Battleship Division, Battle Fleet, until transferred in 1925 to USS Doyen to serve for three years as torpedo and gunnery officer while that destroyer operated with Destroyer Division 30. In 1928 and 1929 he had duty as assistant gunnery officer on the staff of Commander Destroyers, Battle Fleet, thus completing seven years of consecutive duty at sea.

He returned in June 1929 to Annapolis, Maryland, for instruction in Ordnance Engineering (General) at the Postgraduate School, and continued instruction at the Navy Yard, Washington, DC, until June 1932, when he was again ordered to duty aboard the battleship Colorado, at that time operating with Battleship Division 4, Battle Force. He served as a division and plotting room officer in the Colorado until detached in the summer of 1935 with orders to duty in the Bureau of Ordnance, Navy Department, Washington, DC, where he served for two years in the Fire Control Section.

From June 1937 until June 1939 he had duty as gunnery officer on the staff of Commander Destroyer Flotilla 1, Destroyers, Battle Force, USS Dobbin, flagship, and later USS Raleigh, flagship. For the next year he was in command of USS Hull, operating with Destroyer Squadron 1, Battle Force. In August 1940 he reported for duty as Naval Inspector of Ordnance, Ford Instrument Company, Long Island City, New York. During the next three years, production and production facilities were greatly expanded and a large section of industry was converted to the production of ordnance equipment for the Navy. In this expansion the Inspector administered contracts and exercised general supervision over production and the expansion of facilities necessary to meet this production. For meritorious services in that assignment throughout the first two years of World War II, he received a Letter of Commendation, with authorization to wear the Commendation Ribbon, from the Secretary of the Navy. The citation follows in part:

“For outstanding performance of duty as Naval Inspector of Ordnance, Ford Instrument Company, Long Island City, New York, from December 1941 to October 1943. Responsible for the production of fire control equipment at all companies in the greater New York area during this period (he) carried out all duties of his assignment with exceptional initiative, and administrative ability and, maintaining an effective liaison with manufacturers in this vital project, was in large measure responsible for the quality and quantity of all fire control equipment produced for the Bureau of Ordnance…”

In December 1943 he assumed command of USS President Hayes, attached to the Third Amphibious Force. Under his command that vessel participated in the amphibious operations at Guadalcanal, Bougainville, Emirau Island, and the New Britain Area. From April to August 1944 he was in command of Transport Division 2, which participated in the capture and occupation of Guam, July 21 to 26, 1944. He was awarded the Legion of Merit with Combat “V,” and citation as follows:

“For exceptionally meritorious conduct…as Commander of a Transport Division during the amphibious attack on an enemy held island in the Pacific War Area, from July 21 to 26, 1944…(he) directed his division in the landing of attack troops and equipment over a hazardous coral beach and, despite heavy enemy opposition, succeeded in executing the landing as planned…”

He was transferred in August 1944 to Transport Division 6, and during the succeeding four months participated in the capture and occupation of Peleliu and in the invasion of the Philippines and action in Leyte Gulf. He served as Chief of Staff to Commander, Amphibious Group 5, from December 1944 until after the cessation of hostilities in September 1945. During that period he saw action at Okinawa, in April and May 1945, and was commended by Commander Amphibious Force, Pacific, as follows:

“For excellent service in the line of his profession as Chief of Staff for the Commander of an Amphibious Group from March to August 1945, and during the amphibious assault against Okinawa Shima. Displaying outstanding administrative ability and leadership, he ably coordinated and supervised the efforts of the various functions of the command in the planning and execution phases of this important operation. Through his highly commendable and energetic performance of duty, he contributed materially to the success of the operation and proved to be an inspiration to the members of the staff. His conduct gives evidence of his great value to the Naval Service.”

On November 30, 1945 he assumed command of USS St. Paul and served in that command until October 2, 1946. He returned to the Untied States for duty in the Office of Chief of Naval Operations, Navy Department, as Head of Surface Warfare Sub-Section, in the Section Fleet Readiness, Operations Division, until April 28, 1948, at which time he was transferred to duty as Deputy Director of the Office of Public Relations, Navy Department. He continued in that assignment until ordered in February 1949 to duty as Commander, Amphibious Group TWO, with additional duty as Commander Transportation Squadron TWO.

On May 11, 1951 he reported as Assistant Chief of Naval Operations, Chairman of the Ships Characteristics Board, Department of the Navy. During his time as Chairman, the characteristics of many new ships were formulated, including the carrier Forrestal, the destroyer Forrest Sherman, the guided missile cruiser Brown and many other modern ships. In 1952 he was assigned additional duty as Chairman of the Shore Station Development Board, Navy Department.

He was Commander Operational Development Force, US Atlantic Fleet, from February 16, 1954 until August 1956 and on September 19 reported as Commandant of the Potomac River Naval Command, with headquarters at the Naval Gun Factory, Washington, DC. He continued to serve in that capacity until relieved of all active duty pending his retirement effective November 1, 1958. Upon his retirement he was advanced to the rank of Vice Admiral on the basis of combat awards.