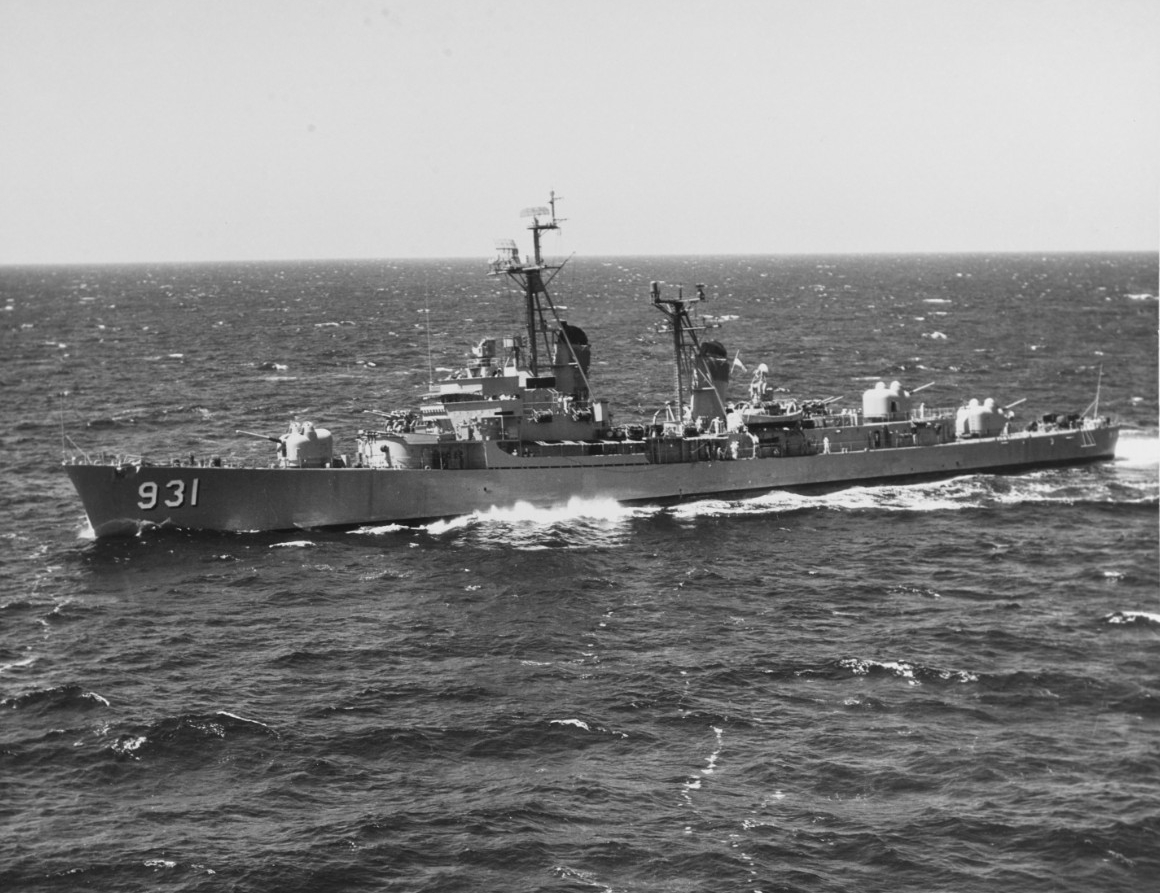 Forrest Percival Sherman, born 30 October 1896 in Merrimack, N.H., was a member of the Naval Academy class of 1917. A naval aviator from 1922, his peacetime service included aviation, surface, and staff assignments. Commanding Wasp (CV-7) when she was sunk by a Japanese submarine 15 September 1942, he was awarded the Navy Cross for his extraordinary heroism in command of the carrier during the opening days of the south Pacific operations. Assigned to Admiral Nimitz's staff he became a stellar member of that effective organization. After the war, he filled a key position in the Navy Department and then went to command U.S. Naval Forces Mediterranean (later 6th Task Fleet). From 2 November 1949 until his death in Naples, Italy, 22 July 1951, Admiral Sherman was Chief of Naval Operations. 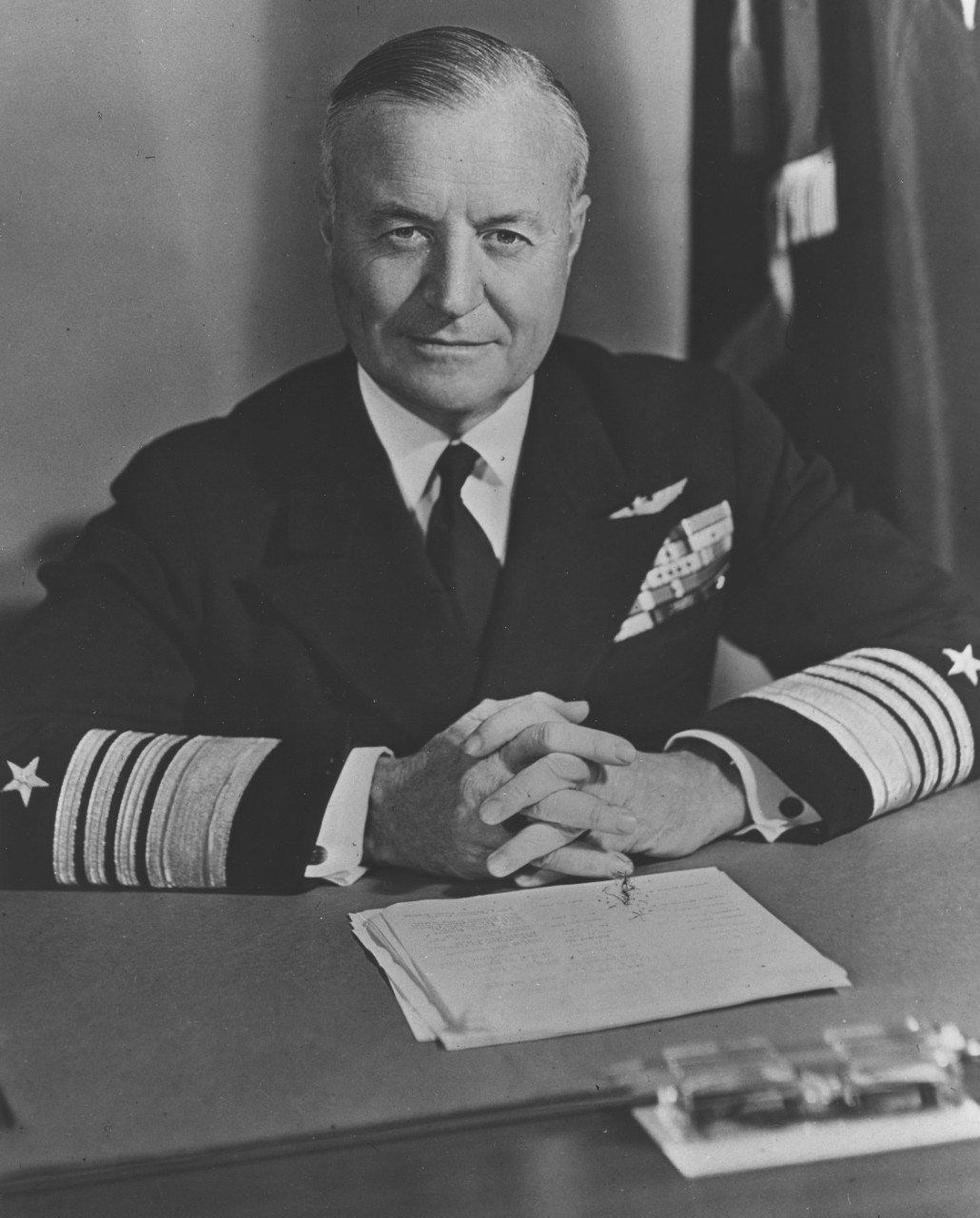 Admiral Forrest Sherman, chief of naval operations, at his desk, circa 1950-51. Official U.S. Navy photograph now in the collections of the National Archives, 80-G-421847.

After a year of initial training and fitting out, Forrest Sherman arrived at her home port, Newport, R.I., 15 January 1957. Two days later she sailed for Washington, D.C., where she was open for public visiting during the week of the second inauguration of President Dwight D. Eisenhower. From Newport, Forrest Sherman sailed on training and fleet exercises along the east coast and in the Caribbean, until the summer of 1957, when she took part in the midshipman cruise to South America and the International Naval Review in Hampton Roads 12 June.

On 3 September 1957, Forrest Sherman sailed for NATO Operation "Strikeback," screening a carrier striking group in exercises off Norway. She called at Plymouth, England, and Copenhagen, Denmark, before returning to Narragansett Bay 22 October. In preparation for her first deployment to the Mediterranean, the destroyer took part in amphibious exercises off Puerto Rico in July 1958, and arrived at Gibraltar 10 August. She patrolled the eastern Mediterranean through the rest of the month, then sailed to join the 7th Fleet in its operations off Taiwan in support of the threatened islands of Quemoy and Matsu. Sailing eastward to complete a cruise around the world, Forrest Sherman returned to Newport 11 November.

During the summer of 1959, Forrest Sherman joined in Operation "Inland Sea," the cruise of a task force into the Great Lakes in celebration of the opening of the St. Lawrence Seaway. She served as escort to the Royal Yacht HMS Brittania with President Dwight D. Eisenhower and Queen Elizabeth II embarked for the naval review on Lake St. Louis 26 June, then sailed on to entertain over 110,000 visitors at Great Lakes ports. Returning to Newport, Forrest Sherman took part in coastal exercises with the Atlantic Fleet, then underwent minor repairs and alterations in the Boston Naval Shipyard.

More training exercises began in 1960 for the destroyer, and on 21 March she sailed on a 7-month cruise to the Mediterranean and duty with the 6th Fleet. En route home in October, Forrest Sherman came to the aid of the Liberian freighter Allen Christensen who had a severely injured man on board. Taking off the patient in a motor whaleboat at night, Forrest Sherman sped him to Bermuda, site of the nearest hospital. The destroyer arrived at Newport on 15 October and some 4 weeks later entered the Boston Naval Shipyard for major overhaul, lasting into 1961.