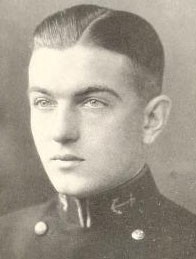 Jeane R. Clark was born on January 14, 1902, in Monona, Iowa. He was appointed to the US Naval Academy at Annapolis, Maryland, from Nebraska in 1921. Graduated and commissioned Ensign on June 4, 1925, he subsequently attained the rank of Captain to date from July 20, 1943. He was transferred to the Retired List on June 1, 1955, and promoted to the rank of the Rear Admiral on the basis of combat awards.

Upon graduation from the Naval Academy in 1925, he joined the USS Wyoming, flagship of the Scouting Fleet. When detached from that battleship in September 1926, he had three month’s duty in the USS Barry, operating with Destroyer Squadrons, Scouting Fleet, and during December 1926 had temporary duty in the USS Osborne. Between January and June 1927 he was under instruction at the Naval Torpedo Station, Newport, Rhode Island, after which he rejoined the USS Barry for further service at sea.

Returning to the United States in June 1930, he had instruction in mechanical Engineering at the Postgraduate School, Annapolis, Maryland, and continued the course at Columbia University, New York, New York, from which he received the degree of Master of Science in June 1932. He next served on board the USS Wickes, operating with Destroyers, Battle Force, and in June 1934 joined the staff of Commander Destroyer Squadron Two.

From June 1935 to May 1933 he was an Instructor in the Department of Marine Engineering at the Naval Academy, after which he reported aboard the USS Astoria, operating with Cruiser Division Six, Scouting Force. Transferred to the USS Buchanan in September 1939, he continued duty in that destroyer, a unit of Destroyer Squadron Thirty-Two, Battle Force, until September 1940. He then joined the USS Boise, which arrived at Manila, P.I., on December 4, 1941, three days before the Japanese attacked Pearl Harbor on December 7. She was en route to Cebu in the southern islands when the United States entered World War II, and subsequently joined other vessels of the Asiatic Fleet. During the remainder of December 1941 and part of January 1942 she patrolled part of the Malay Barrier, touching at many ports in the Netherlands East Indies, and made one short trip to Australia.

Detached from the Boise in May 1942, he was assigned duty on the staff of the Postgraduate School at Annapolis, and remained there until June 1944. Following temporary duty at the Amphibious Training Command, Atlantic Fleet, he assumed command in July 1944 of LST Group Thirty-Eight. “For meritorious conduct….” In this assignment he was awarded the Legion of Merit, with Combat Distinguishing Device “V,” and cited in part as follows:

“…. (He participated) in action against enemy Japanese forces during the assault and reinforcement of Lingayen Gulf and the assault on Okinawa from September 1944 to August 1945… During the assault phases of the operation, he personally supervised the beaching and unloading of his ships at the objective in the face of intermittent air attacks…”

After the cessation of hostilities he served as Flotilla, Commander of LST Flotilla Five until December 1945, when he was assigned to the Amphibious Training Command, Pacific Fleet. In April 1946 he assumed command of the repair ship Ajax, and in August 1947 joined the staff of Commander Pacific Reserve Fleet, as Assistant Material Officer. He commanded the Long Beach Group, Pacific Reserve Fleet, from May 1948 to April 1950, and in June of that year, became Commander Destroyer Squadron Eleven, with additional duty as Commander Destroyer Division One Jundred Eleven.

He was awarded a Gold Star in lieu of the second Legion of Merit with Combat “V,” for exceptionally meritorious conduct…. As Commander Task Group 77.2 during operations against enemy aggressor forces in the Korean area from 8 October 1950 to 7 January 1951…” The citation further states: “Acting as Screen Commander throughout this period, Captain Clark was responsible for effectively coordination the destroyer of the task group to provide maximum antisubmarine and antiaircraft protection for units of Task Force 77…”

From June 1951 until he was retired in June 1955, he was assigned, successively, as Professor of Naval Science, Naval Reserve Officer Training Corps Units at Northwestern University and Ohio State University, and commissioned the Naval Training Center, San Diego, California.