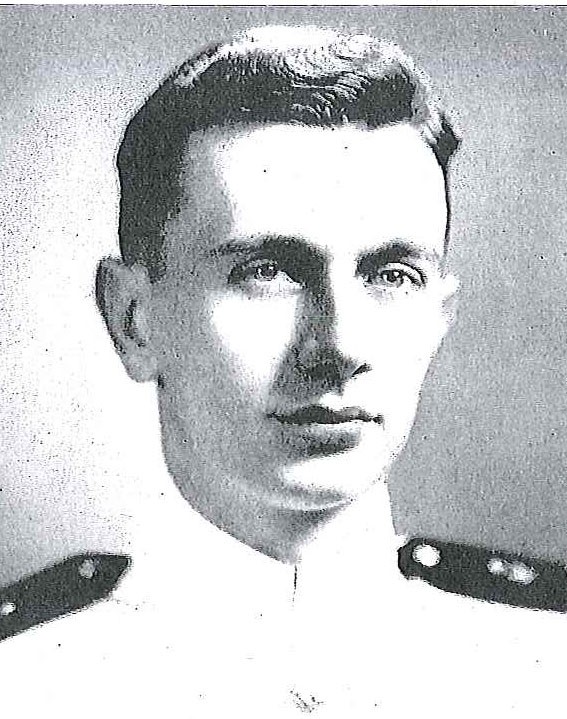 John Richard Fisher was born in Columbus, Ohio, on December 28, 1924, son of Don. A. and Katherine Buchanan (Galighter) Fisher. He attended Grandview Heights High School, Columbus, Ohio and Cochran-Bryan Preparatory School, Annapolis, Maryland, prior to entering the US Naval Academy, on appointment from his native state in 1943. Graduated with the Class of 1847 on June 5, 1946 (accelerated course due to World War II), he subsequently advanced in rank of that year of Rear Admiral, to date from May 1, 1973, having transferred from the Line to the Civil Engineer Corps in June 1950.

Following graduation from the Naval Academy in 1946, he joined USS Kearsarge (CV-33), which operated in the European and Caribbean areas. Detached from that aircraft carrier in September 1947, he next had instruction at the Naval Mine Warfare School, Yorktown, Virginia, and in January 1948 reported as Executive Officer of USS Plover (AMS-33). During the period May 1948 to June 1950, he attended Rensselaer Polytechnic of Bachelor of Civil Engineering and Master of Civil Engineering.

He reported in July 1950 Assistant Public Works Officer at the Naval Air Station, Barbers Point, Oahu, Territory of Hawaii, where he remained until August 1952. The next month he was assigned to the Research Division, Bureau of Yards and Docks, Navy Department, Washington, DC. In May 1954 he became Operations Officer with Mobile Construction Battalion Four, which was deployed to Guantanamo Bay, Cuba; Port Lyautey, Morocco and Argentina, Newfoundland.

From May 1956 to September 1958 he was Assistant Public Works Officer at the Naval Powder Factory, Indian Head, Maryland, after which he served as Deputy Officer in Charge of Construction, Bureau of Yards and Docks Contacts, Cape Canaveral, Florida. In that capacity, he was engaged in constructing tracking stations on the Atlantic Missile Range at Antigua, Trinidad, Ascension, Grand Bahama and Eleuthera. Transferred in August 1959 to the Southeast Division, Bureau of Yards Docks, headquartered in Charleston, South Carolina, he had duty as Assistant Director for Design and as such designed a new Polaris graving dock for the Charleston Naval Shipyard and some five thousand Capehard housing units.

Between January and June 1962 he had instruction at the Armed Forces Staff College, Norfolk, after which he served on the Base Utilization Staff in the Office of the Assistant Secretary of Defense for Installations and Logistics, Washington, DC he was awarded the Joint Service Commendation Medal for distinguished service in the latter assignment.

He was Division Director and Executive Assistant to the Chief of the Bureau of Yards and Docks (later Commander Naval Facilities Engineering Command), Washington, DC, from July 1964 to June 1966. The next month he reported as Officer in Charge of Construction, Southwest Pacific, with headquarters in Manila, Philippine Islands. He was awarded the Navy Commendation Medal “for meritorious service…” in that assignment.

In November 1967 he was designation Commander Thirtieth Naval Construction Regiment and was awarded the Legion of Merit with Combat “V,” “for exceptionally meritorious conduct…” in that capacity. He is entitled to the Ribbons for and facsimile of the Navy Unit Commendation and the Meritorious Unit Commendation awarded the Third Naval Construction Brigade, of which the Thirtieth Naval Construction Regiment was a unit. In March 1969 at Red Beach, Danang, Republic of Vietnam, he was detached for duty as Assistant Commander for Military Readiness at the Naval Facilities Engineering Commander Headquarters, Washington, D.C. he was awarded a Gold Star in lieu of the Second Legion of Merit and cited in part as follows: