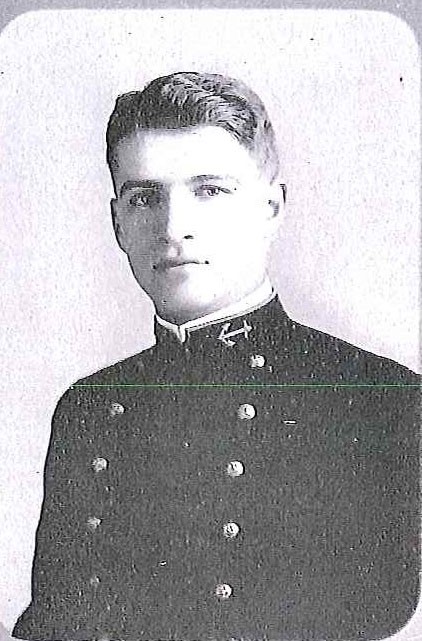 Rear Admiral Edgar was born in Washington, D.C. August 23, 1889, the son of Commander Webster A. Edgar, US Navy, Retired, Navy Academy Class of 1886, and Mrs. Matilda Emery Edgar. He entered the Naval Academy on appointment at large in 1908, was graduated in 1912, and assigned to USS Michigan. In September of that year he was transferred to USS Florida, Flagship, First Division, US Atlantic Fleet. He was ordered to USS Montana for torpedo instruction in January 1914 and rejoined the Florida when the course was completed on April 28, 1914.

He served in USS Smith from October 1914 until May 1916, and was commissioned Lieutenant (junior grade) from June 8, 1915, while in that assignment. His next duty was in connection with fitting out USS Sampson at the plant of the Fore River Shipbuilding Corporation, Quincy, Massachusetts. He served in her from her commissioning June 27, 1916 until August 1918. As a Lieutenant he assisted with fitting out USS Delphy in the fall of 1918, and joined her when she was commissioned on November 30, 1918.

Rear Admiral Edgar was instructor in the Department of Electrical Engineering and Engineering and Physics at the Naval Academy from September 191 until June 1921. After a year’s duty in USS Stockton he joined USS Nevada in July 1922, and served in her until March 1924, having attained the rank of Lieutenant Commander in December 1922. He was stationed at the Naval Station, Tutuila, Samoa, from April 1924, until July 1925, and had a second tour of duty in the Department of Electrical Engineering and Physics at the Naval Academy in 1925-26. He served as engineering officer of USS New York from November 1926, until May 1929, and was District Communication Officer, Thirteenth Naval District, until August 1931, with additional duty as member of the Army and Naval Local Joint Planning Committee, Thirteenth Naval District.

Rear Admiral Edgar commanded USS Smith Thompson from August 1931 until July 1933. As a Commander he served as Asiatic Communication Officer, Sixteenth Naval District, Cavite, P.I., until August 1934, after which he was District Communication officer for the Eleventh Naval District, San Diego, California from September 1934 until May 1937. He had duty as Executive Officer of USS Louisville from June 1937 until June 1939, and followed that duty with a tour as Radio Material Officer, Navy Yard, Pearl Harbor, T.H. He was commissioned Captain on December 8, 1939, and after his return to the United States in June 1940, he served in the Twelfth Naval District, San Francisco, California until he assumed command of USS William P. Biddle on February 3, 1941.

On September 8, 1942, he was transferred to command of Transport Division 5, a part of Amphibious Force, US Atlantic Fleet. For service in this command, he was awarded the Distinguished Service Medal by the Army, with the following citation:

“For exceptionally meritorious service in landing a Combat Team, United States Army, east of cape Matifou, North African, November 7-9, 1942. Captain Edgar’s seamanship and skill in handling the transport division enabled a combat team to land men and equipment in rough seas in the face of heavy enemy air and submarine attacks, thus contributing greatly to the success of operations which resulted in the capture of the city and port of Algiers. Throughout the operations, Captain Edgar cooperated so fully and completely with Army officials that many of the difficulties inherent in the difficult operation of landing troops on a hostile shore were obviated, thereby contributing greatly to the success of the operation. “

“For exceptionally meritorious conduct in the performance of outstanding services while Commander of Transports of a Task Force during the invasion of the Island of Sicily. Captain Edgar, with great energy and professional skill, directed all preparatory training and molded the transport group into an effective combat force. By his able and aggressive leadership under fire, the embarked troops were landed efficiently and expeditiously on enemy beaches, thereby greatly contributing to the success of the invasion. The extraordinary ability and outstanding devotion to duty displayed by Captain Edgar reflected great credit upon himself and the Naval Service.

Gold Star in lieu of a Second Legion of Merit:

“For exceptionally meritorious conduct in the performance of outstanding service as Commander Transports of a major Force during the Allied invasion on Italy, September and October 1943. As commander Transports of a major Task Force, Commodore Edgar was charged with the coordination and execution of the plans for the transportation, discharge and supply of the invading forces throughout the entire assault and follow-up period. With great skill and outstanding leadership he planned for this mission, and with minimum casualties among personnel and equipment executed it successfully, thereby materially contributing to the invasion of Italy and subsequently to the supply of the invading Allied armies. The extraordinary ability and outstanding devotion to duty displayed by Commodore Campbell D. Edgar, U.S. Navy, reflected great credit himself and the Naval Service.”

Rear Admiral Edgar returned to the Unites States in July 1945, and after serving for a year at the Navy Yard, Puget Sound, Washington, he was ordered to the Naval Hospital, San Francisco, California, where he remained from August to December 1946. He was transferred to the Retired List of the Navy in the rank of Rear Admiral on January 1, 1947, and relived of all active duty.