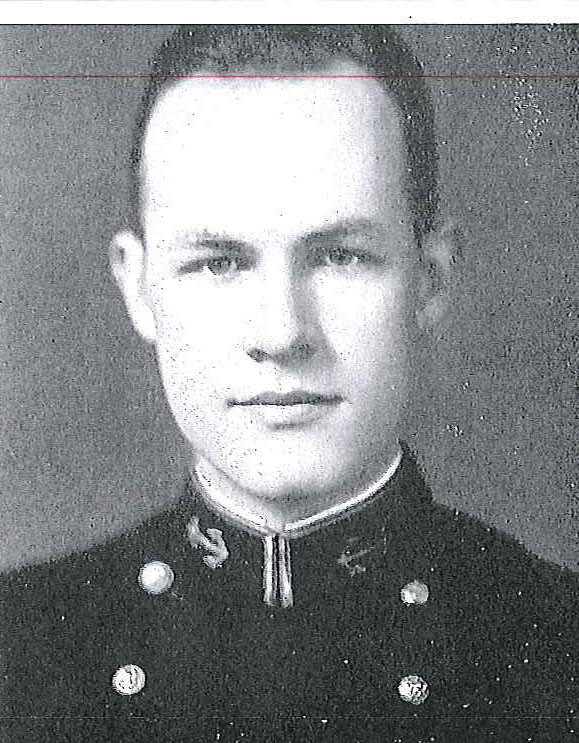 Lloyd George Benson was born in Ilion, New York, on August 8, 1913, son of Lloyd Raeburn and Priscilla Alden Benson. He entered the US Naval Academy from the State of Kansas on June 24, 1932. As a Midshipman he managed the Soccer Team for one year, was photographer and photo editor of the Lucky Bag; and was Midshipman Lieutenant (jg) during his First Class year. He as graduated with the Class of 1936 on June 4 of that year, but was not commissioned due to failure to meet requirements for vision, and his resignation was accepted.

On July 1, 1936 he was employed by Proctor and Gamble Company, Cincinnati, Ohio, and sent to their Kansas City factory for training. He worked for three years in production supervision in process and production departments. On August 1, 1939 he was transferred to Ivorydale Company Headquarters (Cincinnati) to work in personnel research, Industrial Relations Division. In 1941 he became Assistant Head of the Training Department (mechanical aptitude testing, employment tests), and served as such until called to active duty in the US Naval Reserve.

Reporting for active duty in June 1942, he served in USS Ward until February 1944, having duty as Executive Officer of that destroyer in the Pacific during the last year of that assignment. For one month thereafter he was Executive Officer of USS Crosby, and in March joined USS Kilty (APD 15), in which he served as Commanding Officer until May 1945. He was awarded the Legion of Merit with Combat “V,” for “exceptionally meritorious conduct…as Commanding Officer of the USS Kilty, in action against enemy Japanese forces in the Southwest Pacific and Philippine waters, from April 8, 1944 to February 25, 1945…”

The citation further states that “Despite frequent enemy air attacks and shore battery fire, Lieutenant Commander (then Lieutenant) Benson directed his ship in delivering prolonged and effective gunfire which resulted in the destruction of enemy aircraft and shore installations, thereby accomplishing his primary mission of landing assault troops on hostile beaches…”

Upon his return to the United States he had brief temporary duty in July and August 1945 at the Naval Training Center, Miami, Florida, and the Naval Training Station, Naval Operating Base, Norfolk, Virginia. He then joined USS Kirwin (APD-90) building at the Navy Yard, Philadelphia, and commanded her briefly after her commissioning in November 1945. He was transferred to USS Begor (APD-127) in December, and from January to April 1946 served as Commanding Officer of USS Dufilho (DE-423).Released from active duty on June 18, 1946, he was recalled on January 15, 1948, and has served continuously since that time, his first assignment being at Cincinnati, Ohio, in connection with Naval Reserve Program as Organization and Field Administrator. On May 10, 1948 he reported as Assistant Inspector-Instructor, Naval Reserve, and Officer in Charge, US Naval Training Center, Cincinnati, After four months, he was transferred to similar duty at Covington, Kentucky, and in March 1950 was redesignated Inspector-Instructor, Naval Reserve, and Officer in Charge, Naval Reserve Facilities, at Covington.

From January 1951 to February 1952, he had duty afloat as Executive Officer of USS Preston (DD 795), and since April 1952 has been a member of the Joint Military Advisory Group to the Republic of the Philippines as Assistant Head of the Navy Section.