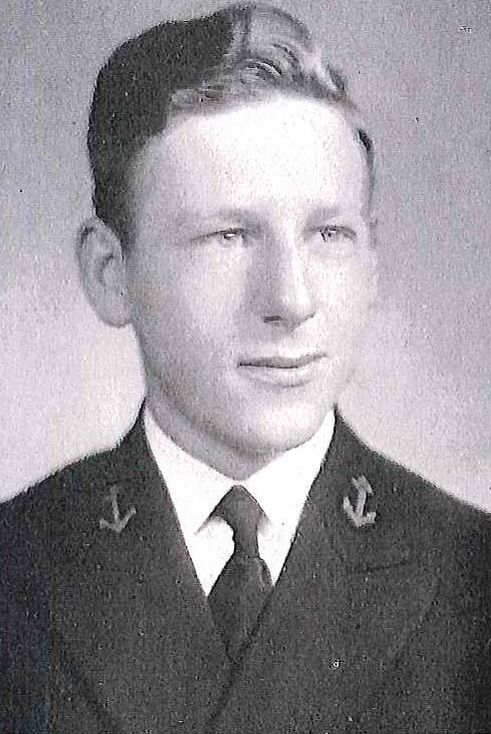 Eugene Bennett Fluckey was born in Washington, D C, on October 5, 1913. He attended Western High School in Washington and Mercersburg Academy, Mercersburg, Pennsylvania, and prepared for the Naval Academy, Annapolis, Maryland, at Columbian Preparatory School, Washington. Entering the Naval Academy in 1931, he was graduated and commissioned Ensign in 1935. He subsequently progressed to the rank of Rear Admiral, to date from July 1, 1961.

After graduation from the Naval Academy in June 1935, he was assigned to USS Nevada, and in May 1936 was transferred to USS McCormick. In June 1938 he reported for instruction at the Submarine School, New London, Connecticut, and in December, that year, was assigned to USS S-42, in the Canal Zone. On June 11, 1941, he was transferred to USS Bonita. Detached in August 1942, after five war patrols in the Bonita, he returned to Annapolis for graduate instruction in Naval Engineering (Design).

In November 1943 he attended Prospective Commanding Officers’ School at the Submarine Base, New London, then reported to Commander Submarine Force, Pacific Fleet. After one war patrol as Prospective Commanding Officer of USS Barb (her seventh), he assumed command of that submarine on April 27, 1944. For heroism during the Eighth, Ninth, Tenth, Eleventh and Twelfth War Patrols of the USS Barb, he was awarded the Medal of Honor, the Navy Cross with Gold Stars in lieu of three additional awards. The citations follow, in order of action for which awarded:

Navy Cross: “For extraordinary heroism . . . during the Eighth War Patrol from May 21, 1944, to July 9, 1944. Through his outstanding determination, excellent initiative and aggressiveness, despite adverse conditions of cold weather, fog and ice floes, five intelligently planned and well executed torpedo attacks resulted in the sinking of three enemy freighters and two transports. In addition, two daring gun battles were conducted among the icebergs and resulted in the sinking of two enemy trawlers . . .”

Gold Star in lieu of the Second Navy Cross: “For extraordinary heroism . . . during the Ninth War Patrol . . . from August 4 to October 3, 1944. . .(He) launched damaging torpedo attacks against Japanese shipping and combatant units to sink a 10,000-ton tanker, two freighters totaling 9,500 tons, a 22,500-ton auxiliary aircraft carrier, and to damage a tanker of 5,000 tons. Effecting the rescue of fourteen British and Australian prisoners of war who were survivors of a torpedoed enemy transport, he provided care and treatment for the sick and wounded and, although heavy enemy counterattacks caused minor damage to his ship, employed evasive tactics and returned to port without further damage. . .”

Gold Star in lieu of Third Navy Cross: “For extraordinary heroism . . . during the Tenth War Patrol . . . from October 27 to November 25, 1944. Maneuvering his ship in extremely shallow water. . . (he) braved intense hostile countermeasures to penetrate strong enemy escort screens and launch smashing torpedo attacks against Japanese shipping, sinking five enemy ships for a total of more than 28,900 tons and damaging three other vessels, including a large aircraft carrier, totaling more than 40,000 tons. . .”

Medal of Honor: “For conspicuous gallantry and intrepidity at the risk of his life above and beyond the call of duty as Commanding Officer of USS Barb during her Eleventh War Patrol along the East Coast of China from December 19, 1944, to February 15, 1945. After sinking a large enemy ammunition ship and damaging additional tonnage during a running two-hour night battle on January 8, Commander Fluckey, in an exceptional feat of brilliant deduction and bold tracking on January 23, located a concentration of more than thirty enemy ships in the lower reaches of Nan-Juan Chiang (Mamkwan Harbor). Fully aware that a safe retirement would necessitate an hour’s run at full speed through the uncharted, mined and rock-obstructed waters, he bravely ordered, ‘Battle Stations; Torpedoes’. In a daring penetration of the heavy enemy screen, and riding in five fathoms range. Quickly bringing the ship’s stern tubes to bear, he turned loose four more torpedoes into the enemy, obtaining eight direct hits on six of the main targets to explode a large ammunition ship and cause inestimable damage by the resultant flying shells and other pyrotechnics. Clearing the treacherous area at high speed, he brought the Barb through to safety and four days later sank a large Japanese freighter to complete a record of heroic combat achievement. . .”

Gold Star in lieu of Fourth Navy Cross: “For extraordinary heroism . . . during the Twelfth War Patrol . . . from June 8 to August 2, 1945. Introducing rocket and saboteur tactics into submarine warfare, (he) braved severe countermeasures . . .to take his vessel into extremely shallow water and launch bold torpedo, rocket and gun attacks which resulted in the sinking of enemy shipping totaling 11,000 tons and infliction of extensive damage to seven Japanese coastal towns. Landing a party of Commandos in rubber boats on a hostile shore on one occasion, he contributed to their success in destroying a Japanese train . . .”

He is also entitled to the Ribbons for and facsimiles of the Presidential Unit Citation and the Navy Unit Commendation awarded the USS Barb.

In his final report, Admiral Fluckey paid this tribute to his men: “How difficult it is to close this chapter in the life of the Barb. What wordy praise can one give such men as these; men who, without the intelligence information available to the C. O., follow unhesitatingly when in the vicinity of minefields so long as there is the possibility of targets. Men who offer half a year’s pay for the opportunity to land on Jap land, to blow up a Jap train with a self-trained demolition team. Men who flinch not with the fathometer ticking off two fathoms beneath the keel. Men who shout that the destroyer is running away after we’ve thrown every punch we possess and are getting our ears flattened back. Men who will fight to the last bullet and then want to start throwing the empty shell cases. These men are Submariners.”

Completing the period of hostilities in the Barb, he was ordered in August 1945 to Groton, Connecticut, to fit out USS Dogfish and to be that submarine’s Commanding Officer upon completion. After the Dogfish’s launching, however, he was transferred to the Office of the Secretary of the Navy, to work directly under Secretary James Forrestal with plans for unification of the Armed Services. From there he went to the War Plans Division, and in December 1945 was selected by Fleet Admiral Chester W. Nimitz, in-coming Chief of Naval Operations, to be his Personal Aide.

On June 9, 1947, he returned to submarines, assuming command of USS Halfbeak, the second submarine to be converted to a guppy-type, high speed attack submarine with snorkel. (In February 1949, in an effort to stem communist infiltration in American youth movements, he became an Eagle Scout.) I June of 1949 he was ordered to the Staff of Commander Submarine Force, Atlantic Fleet, with the responsibility of setting up the Submarine Naval Reserve, and a year later became the Flag Secretary to Admiral James Fife, Commander Submarine Force, Atlantic Fleet.

From October 1, 1950, to July 1953, he served as US Naval Attache and Naval Attache for Air to Lisbon, Portugal. The Portuguese Government, for his distinguished services while there, decorated him with the Medalha Militar, noting that this was the first time this decoration had been awarded to a Naval Attache from any other country.

In September 1953 he took command of Submarine Division 52, and on June 11, 1954, became Commanding Officer of the USS Sperry, submarine tender. Under orders of March 7, 1955, he next served as Commander Submarine Squadron Five, and after a year in that command returned to the Naval Academy for duty as Head of the Department of Electrical Engineering. He attended the National War College in 1958-1959 and upon completion of the course in June 1959, was assigned to the National Security Council, Washington, D. C.

His selection for the rank of Rear Admiral was approved by the President in July 1960, and in October of the same year he reported as Commander Amphibious Group Four. In November 1961 he became President of the Naval Board of Inspection and Survey, Washington, D. C., and in March 1964 was assigned temporary duty as Task Force Director of the Shipyards Appraisal Group.

“…Keeping his sights constantly on, and applying his ceaseless energy to major objectives, (he) contributed directly to the improvement of every one of the ONI’s principal programs, making his influence strongly felt in both national and international matters . . .”

In July 1968 he reported as Commander Iberian Atlantic Command and Chief of the Military Assistance Advisory Group, Portugal, with headquarters in Lisbon. He was awarded the Distinguished Service Medal for “exceptionally meritorious service. . .” in that capacity. The citation further states in part: “. . . Responsible for planning, implementing and supervising the United States security assistance effort to Portugal to upgrade and modernize the Portuguese Armed Forces, Rear Admiral Fluckey successfully coordinated United States security assistance operations with those of Portugal to develop more effective, better-equipped and combat-ready Armed Forces. . .”

In addition to the Medal of Honor, Navy Cross and Gold Stars in lieu of the Second, Third and Fourth Navy Crosses, the Distinguished Service Medal, the Legion of Merit with Gold Star, the Presidential Unit Citation Ribbon, and the Navy Unit Commendation Ribbon, Rear Admiral Fluckey has the American Defense Service Medal, Fleet Clasp; the Asiatic-Pacific Campaign Medal; American Campaign Medal; World War II Victory Medal; National Defense Service Medal with bronze star, and the Philippine Liberation Ribbon. He also holds the Expert Pistol Shot Medal. He was awarded the Medal of Military Merit, Second Class, by the Government of Portugal.