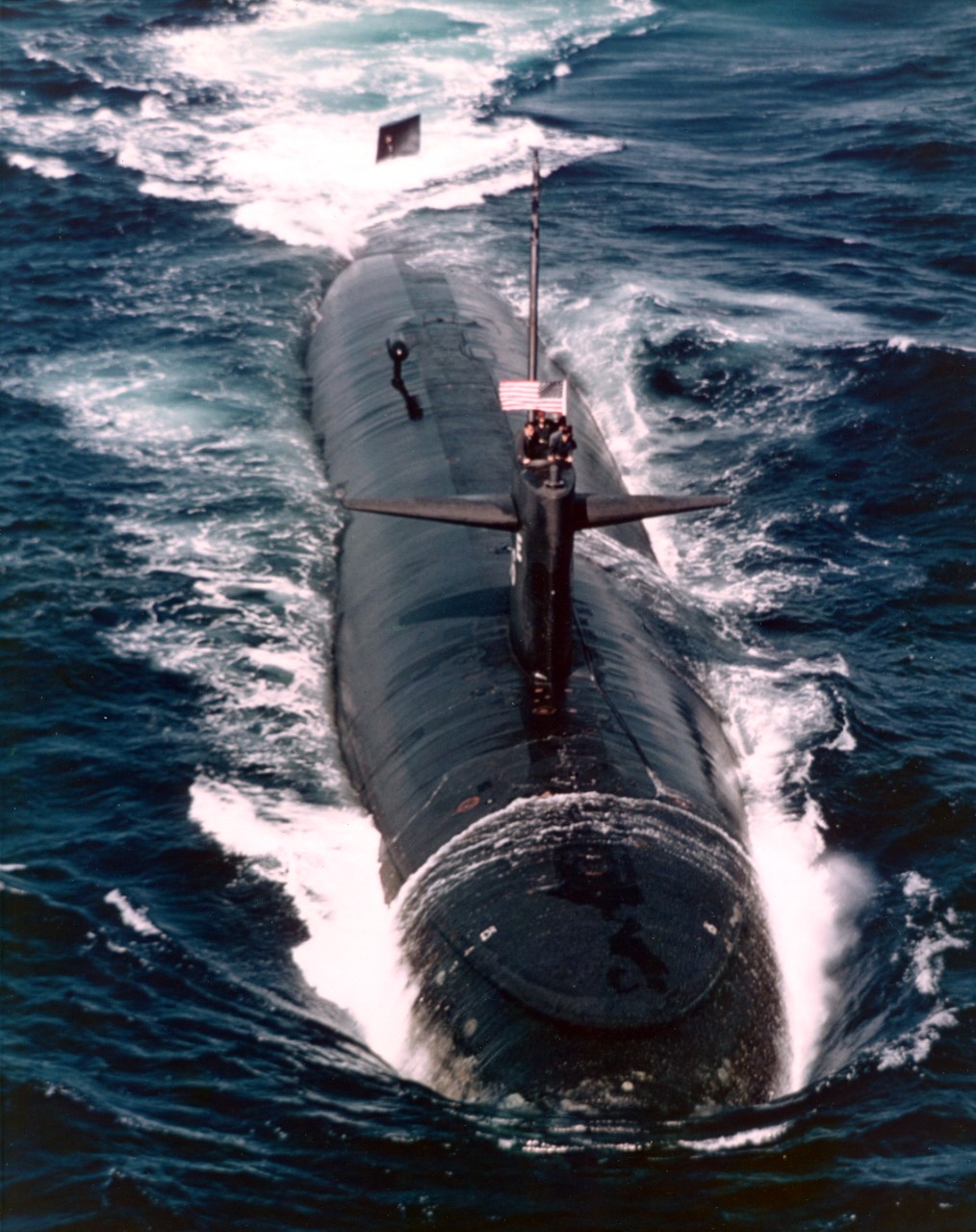 A red and black striped fish native to waters around Thailand and Malaysia. The barb grows to a length of two inches and is popularly known as the banded barb or the tiger barb because of its coloring. A kingfish of the Atlantic coast is also called a barb.

The second Barb (SSN-596) was laid down on 9 November 1959 at Pascagoula, Miss., by the Ingalls Shipbuilding Corp.; launched on 22 February 1962; sponsored by Mrs. Marjorie Fluckey; and commissioned on 24 August 1963, Comdr. Charles D. Grojean in command.

Barb departed Pascagoula on 28 September for her shakedown cruise off the west coast. Sailing by way of the Panama Canal and Vallejo, Calif., she arrived in Puget Sound where she carried out a variety of trials during the period between 30 October and 19 November. The submarine then concluded her shakedown training with a four-week, round-trip voyage to Hawaii. Upon her return to the west coast on 17 December 1963, she entered the Mare Island Naval Shipyard for post-shakedown availability. Those repairs and modifications occupied her for nine months, carrying her well into 1964. Near the end of that period, on 1 July 1964, her home port was officially changed from Vallejo, Calif., to Pearl Harbor. Seven weeks later, Barb left the yard at Mare Island and began a somewhat circuitous voyage to her new base, travelling by way of Seattle, Wash.

Following her arrival in Hawaii early that fall, the warship pursued an active schedule of training missions in the local operating area. On 1 December 1964, Barb was designated flagship for the Commander, Submarine Force, Pacific Fleet. Local training operations in the Hawaiian Islands took up most 1965. In fact, save for the period between 9 June and 25 July 1965 during which she voyaged to Mare Island Naval Shipyard for repairs to her sonar, the submarine operated in the Hawaiian area exclusively for two years. Early in the fall of 1966, the submarine made another extended voyage to the west coast during which she visited San Francisco and then carried out weapons alignment tests at Dabob Bay, Wash., before undergoing repairs and modifications at the Puget Sound Naval Shipyard. Barb returned to Hawaii late in October and spent the rest of 1966 in Pearl Harbor in a restricted availability.

The submarine resumed a normal training schedule in the Hawaiian operating area at the beginning of 1967. That employment continued through the first four months of the year. Soon thereafter, however, her routine underwent a significant change when she embarked on her first deployment to the Far East on 9 May. She arrived at Naha, Okinawa, on 22 May and stayed until the 27th when she sailed for Vietnamese waters and a tour of duty with TG 77.9. After that assignment, Barb made a liberty call at Singapore before heading for Yokosuka on 19 June. The submarine spent nine days at Yokosuka and then returned to sea for almost three weeks of unspecified operations. Another upkeep period back at Yokosuka closed out the month of August, at which point Barb got underway for Hong Kong and a week-long liberty and goodwill visit. While on her way back to the Vietnamese war zone, she received orders diverting her to training duty out of Naha, Okinawa. That employment lasted until the second week in October, at which time she headed for Guam. Though diverted briefly to Subic Bay, Barb reached her destination on 15 October. At the conclusion of some tactical exercises and upkeep at Guam, she set out on the voyage back to Hawaii on 24 October. The submarine ended her first Far Eastern deployment when she reentered Pearl Harbor on 1 November.

Following post-deployment standdown, Barb resumed local operations in the Hawaiian Islands at the beginning of 1968. She continued so engaged until late May 1968 when she commenced regular overhaul at the Pearl Harbor Naval Shipyard. The maintenance and repairs took up the rest of 1968 and nearly all of 1969 as well. The overhaul ended officially on 8 December 1969, just in time for the annual holiday standdown. Early in January 1970, she sailed to Washington state again to carry out weapons systems’ accuracy tests and to test a new type of torpedo. Returning to Hawaii late in February, Barb pursued a normal schedule of local training missions from her base at Pearl Harbor. That employment occupied her for the remainder of 1970; though, late in the year, she began preparations to deploy overseas.

The submarine left Pearl Harbor for the western Pacific on 2 January 1971. She combined an extended special operation with her passage west that made the transit an unusually long one. She did not arrive in Yokosuka until 7 February. After two weeks of upkeep there, she headed for Subic Bay where she made a two-day stop between the 26th and the 28th. Departing Subic Bay on the 28th, Barb carried out another four weeks of special operations before returning to Subic Bay on 28 March. On the 30th, she embarked on the voyage to Hong Kong where she spent the first week in April. From Hong Kong, the warship sailed to the Mariana Islands, arriving at Guam on the 15th and remaining there for the rest of the month. On 1 May, she returned to sea for eight weeks of special operations. Her deployment ended on 25 June with her arrival back in Pearl Harbor.

After post-deployment standdown, Barb began an extended shipyard availability at the end of July. She left the drydock in mid-October, but other repair work occupied her through the end of 1971 and into 1972 so Barb did not resume normal operations until the spring of 1972. On 22 May 1972, the submarine deployed to the Marianas area once more and operated from Apra Harbor, Guam, for most of the remainder of the year. On 15 December, she returned to Hawaii. From January to early March 1973, Barb carried out normal training missions out of her home port. On 10 March, she stood out of Pearl Harbor on a three-month overseas assignment. Following another eight-week special operation, she visited Pusan, South Korea, for four days during the second week in May. From Pusan, the submarine sailed back to the Marianas, in the vicinity of which she operated for about a month before heading back to Hawaii on 10 June. She reentered Pearl Harbor on the 18th.

At the end of the usual month of leave and upkeep, Barb took up local training operations once again in July. In September, she participated in the multinational exercise RIMPAC 73. During the waning months of 1973, the submarine returned to local training duty and began preparations for her second refueling overhaul scheduled to begin the following spring. That overhaul commenced when she entered the Mare Island Naval Shipyard on 1 March 1974, and it lasted for just over 20 months. During that time, her home port was changed from Pearl Harbor to San Diego so that, when she completed the overhaul early in November of 1975, Barb began her refresher training out of that new home port. Similar assignments carried out all along the west coast of North America occupied her time for almost 16 months. She did not start preparing for another tour of duty overseas until late in 1976, and the deployment itself did not begin until early in 1977.

On 17 February 1977, the submarine stood out of San Diego on her way to the Far East. On the first leg of her voyage, Barb participated in the multinational exercise RIMPAC 77 and then made a two-day call at her former home port, Pearl Harbor, at the end of the month. She then embarked on the transit to Subic Bay, the duration of which was extended by exercises with TG 37.9 and TG 77.3. The submarine arrived in Subic Bay on 18 March but returned to sea almost immediately for the passage to Chinhae, Korea. Along the way, she took part in exercises with units of the Japanese Maritime Self-Defense Force and with elements of the South Korean Navy. Barb visited Chinhae from 29 March to 1 April and then called at Hong Kong between 11 and 14 April. From Hong Kong, she set out for the Marianas, exercising with units of the New Zealand Air Force and U. S. Navy patrol planes along the way. The submarine spent the period 20 April to 9 May in port at Guam, then put to sea for the first of two special operations that she conducted in May and June. Barb reentered Guam on 24 May but returned to sea the following day to begin the second and longer of her two special operations. That employment lasted until the end of June at which time she put into Subic Bay for a week of liberty before heading back to the United States on 7 July.

On the way home, Barb called at Hawaii for several days in the latter part of July, resuming the voyage home on the 25th. She arrived back in San Diego on 2 August. After several weeks of relative inactivity, the submarine embarked on a schedule of local operations highlighted by her selection as a test platform for the “Tomahawk” cruise missile in late October. She remained so occupied through the end of 1977 into the second quarter of 1978. On 26 April, the warship entered the Mare Island Naval Shipyard for a three-month availability. She resumed normal operations out of San Diego late in July and continued so engaged until deploying to the western Pacific once more on 27 September 1978. Barb spent the week between 3 and 10 October in Hawaii and then resumed her passage west arriving in Subic Bay on the 29th. She stayed in Subic Bay for three weeks and then set sail for Japan on 20 November. After four days of voyage repairs at Yokosuka, she returned to sea on 1 December for a month-long special operation that she concluded at Chinhae, Korea, on the last day of 1978.

The Chinhae visit extended three days into 1979 at which point the submarine set out for the Marianas. She reached Guam on 11 January and remained there through the end of the month. On 1 February, She embarked on the voyage to Subic Bay where she arrived on the 6th. Three days later, Barb put to sea to take part in MULTIPLEX 2-79 that lasted until the 21st. She returned to Subic Bay for the last week in February before setting out on the voyage home on the 28th. Almost three weeks later, on 17 March, Barb stood into San Diego and commenced seven-weeks of post-deployment leave and upkeep. At the end of the first week in May, she embarked upon a normal training routine that she carried out in the southern California operating area.

Similar evolutions occupied her for the rest of 1979 and in to the first weeks of 1980. On 7 February, Barb deployed to the mid-Pacific region to conduct equipment tests and procedure evaluations and to take part in the multinational exercise, RIMPAC 80. Based at Pearl Harbor, she carried out those missions until early April when she returned to San Diego. Another seven-week upkeep period followed, after which she resumed local operations out of San Diego. The submarine continued to pursue training assignments locally until late in July. On 21 July, Barb entered the Mare Island Naval Shipyard for regular overhaul. She was undergoing repairs and modifications at the end of 1980.

Barb was decommissioned on 20 December 1989 and struck from the Navy list on the same day. She was disposed of by submarine recycling on 14 March 1996.