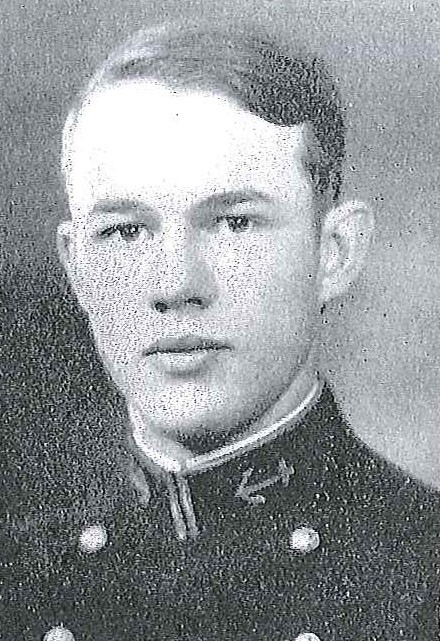 Aquilla Gibbs Dibrell, Jr., was born in Sparta, Tennessee, on March 6, 1910, son of Commander A. G. Dibrell, USN, Retired, and Mrs. (Margarite Casey) Dibrell. He attended the Severn School, Severna Park, Maryland, prior to his appointment, at large, to the US Naval Academy, Annapolis, Maryland, in 1928. As a Midshipman he participated in baseball, swimming and gymnastics. Graduated and commissioned Ensign on June 2, 1932, he subsequently advanced in rank, attaining that of Captain, to date from May 1, 1951.

Following graduation from the Naval Academy in 1932, he joined USS Cincinnati. While he was on board that cruiser, in addition to his primary duties, he served as baseball and swimming coach, and was shortstop on the Cincinnati’s baseball team which participated in the semi-finals of the Fleet Championship in 1933. Detached from the Cincinnati in September 1934, he was then ordered to the Naval Air Station, Pensacola, Florida, for flight training. Designated Naval Aviator on October 25, 1933, he was assigned to Fighting Squadron ONE, operating from USS Langley. In February 1937 Fighting Squadron ONE was transferred to USS Lexington, and he continued to serve with that squadron until June 1937, when he reported on board USS Houston, for service with Cruiser Scouting Squadron FOUR.

For two years, June 1938-June 1940, he had duty at the Naval Aircraft Factory, Philadelphia, Pennsylvania. In that assignment he was engaged in testing new planes, arresting gear and catapults, with collateral duty as Athletic Officer and Officer in Charge of Catapults (1939-1940). He was serving as Lending Signal Officer of USS Lexington when the United States entered World War II, December 8, 1941. While on board that aircraft carrier, he aided in the landing of fighter planes, nearly out of gasoline, while the Lexington’s gun batteries were firing at Japanese planes attacking the carrier off Bougainville, and participated in the raids on Salamaua-Lae.

During the Battle of the Coral Sea, May 4-8, 1942, search aircraft from the Lexington sighted the Japanese carriers Shokaku and Zuikaku. Carrier aircraft damaged the Shokaku and forces her to retire. At the same time, Japanese aircraft hit the carriers Yorktown and Lexington, damaging the latter to such an extent that USS Phelps was ordered to sink her to keep the vessel from falling into the hands of the enemy.

Following the sinking of the Lexington on May 8, 1942, he returned to the United States and was assigned the next month to the Naval Air Station, Fort Lauderdale, Florida. While there he had duty in connection with the training of landing signal officers and carrier pilots. In September 1943 he reported as Executive Officer of USS Casablanca, and later assumed command of that escort carrier. From June 1946 until December 1947 he was Executive Officer and later Commanding Officer of the Naval Air Technical Training Center, Corpus Christi, Texas, after which he served as an Instructor in Aviation, Naval School, General Line, Monterey, California.