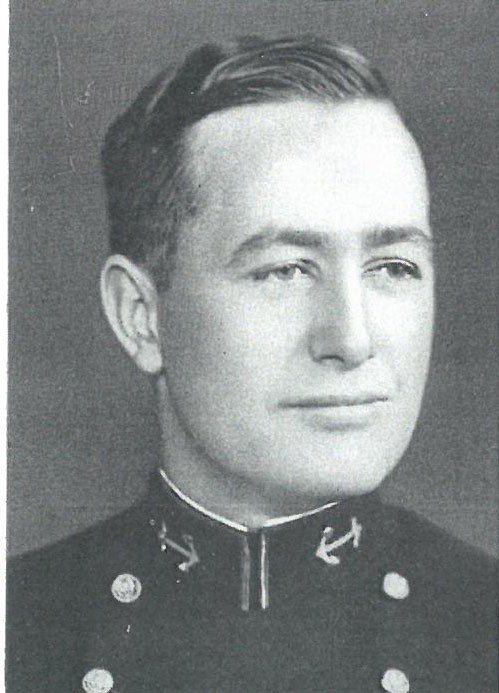 Cornelius Patrick Callahan, Jr., was born in Butte, Montana, on October 17, 1915, son of Cornelius P. and Anna Driscoll Callahan. He attended Butte Central High School and entered the US Naval Academy, Annapolis, Maryland, on appointment from his native state in June 1934. As a midshipman he participated in athletics (soccer, wrestling, squash and Battalion basketball). He was graduated with the degree of Bachelor of Science and commissioned Ensign in the US Navy on June 2, 1938, and through subsequent advancement attained the rank of Captain, to date from July 1, 1957.

After graduation from the Naval Academy he served from July 1938 until June 1939 as a Division Officer on board USS Idaho, operating in the Atlantic. He then had eighteen months of similar duty in the Pacific Area while attached to USS Blue, after which he reported to the Submarine School, New London, Connecticut, for submarine instruction. On May 15, 1941, he reported to USS Pike, and was serving as Executive Officer and Navigator of that submarine, in the Pacific, at the outbreak of World War II in December 1941. He was awarded the Bronze Star Medal with Combat “V,” and the following citation:

“For heroic achievement as Diving Officer of the USS Pike during the Eighth War Patrol of that vessel in enemy Japanese-controlled waters of the Marianas Island Area from July 22 to September 9, 1943. Maintaining careful and precise control of depth, Lieutenant Callahan rendered invaluable assistance to his commanding officer in conducting attacks which resulted in the sinking and damaging of 34,000 tons of enemy shipping. Dry his cool courage and devotion to duty, he contributed directly to the success of his ship in evading hostile countermeasures, and upheld the highest traditions of the US Naval Service.”

Detached from the Pike on December 9, 1943, he assumed command on December 31, of USS Bass (SS-164) at New London, after attending the Command Class course at the Submarine School. He remained in command until February 1945, during which period the Bass conducted secret experiments off Block Island, in the New London Area. In April of that year he joined USS Segundo (SS-398), in which his pennant flew while he was in command of Submarine Division 121, operating in the Pacific Area. In that command he participated in the assault and occupation of Okinawa Cunto from May 14 to June 13, 1945.

At the end of hostilities in August 1945, he was transferred to USS Barb (SS-20_which had just won the Navy Unit Citation for action in the Pacific, and commanded her until March 1946. he then became Officer in Charge of the US Navy Recruiting Station, St. Louis, Missouri, and after serving in that capacity for three years, was ordered to USS Barbero (SSA-317), recommissioned as a cargo submarine of the Pacific Fleet in 1948. He commanded her from April 1949 until July 1950, during which she conducted experiments to evaluate her capabilities as a cargo carrier. He decommissioned that vessel on June 30, 1950, and she was placed in reserve. In August of that year he was designated Material and Maintenance Officer, Sub Group 2, San Diego Group of the Pacific Reserve Fleet, and remained in that area as Chief of Staff Officer to the Commander Pacific Reserve Fleet from January to April 1951.

He served for five months as Material Officer, Sub Group 2, San Diego Group and from September 1951 until October 1952 as Executive Officer of that Group. Still in the San Diego Area, he served from November 1952 until January 1954 as Chief Staff Officer on the Staff of Commander LSD Squadron One, and from February 1954 until May 1955 as Commander LSR Squadron Three. We next had duty as Force Training and Readiness Officer on the Staff of Commander Amphibious Force, Pacific Fleet, then from February 1958 until July 1959 was Commanding Officer of  USS Thomaston (LSD-28).

In August 1959 he assumed command of the Naval Reserve Officers Training Corps Unit of the University of Rochester, New York, where he was also Professor of Naval Science. Under orders of February 23, 1962, he later reported as Chief, US Naval Mission to Chile, at Valparaiso.