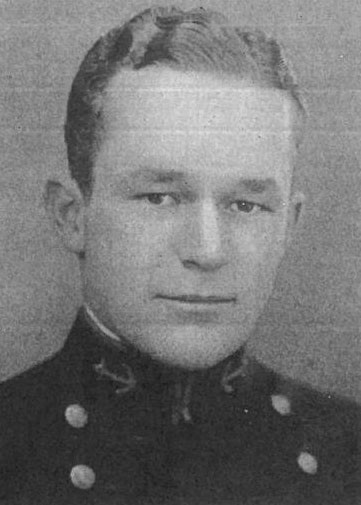 Paul Ramseur Anderson was born in Statesville, North Carolina, on 1 May l901, son of George R. and Margaret (Wood) Anderson. He attended Statesville (North Carolina) public schools, prior to entering the US Naval Academy, Annapolis, Maryland, on appointment from his native state in 1924. As a Midshipman he was a member of the Gym Team and was Head Cheer Leader. Graduated and commissioned Ensign on 7 June 1928, he subsequently progressed in rank to that of Captain, to date from 24 March 1945. On 1 July 1958 he was transferred to the Retired List of the US Navy and was advanced to the rank of Rear Admiral on the basis of combat awards.

Following graduation from the Naval Academy in 1928, he joined USS New York, serving as a junior officer in all departments and for the last fifteen months as Deck, Division and Watch Officer. During the period January 1932 to March 1934 be had consecutive duty in USS Fulton and USS Nokomis, engaged in Hydrographic survey in Central American waters. He was commended by the American Minister to Costa Rica on behalf of the Costa Rican Government for the survey of the Gulf of Nicoya. He next assisted in the fitting out of USS Ranger at the Newport News (Virginia) Shipbuilding and Dry Dock Company, and reported as Boiler Division Officer on board that aircraft carrier when she was placed in commission on 4 June 1934.

In May 1935 he attended a course in chemical warfare at Edgewood (Maryland) Arsenal, and then from June of that year until June 1937 had instruction in applied communications at the Postgraduate School, Annapolis, Maryland. Completing the course, he was designated Applied Communicator. He was Radio Officer on board USS Lexington until June 1938, when he joined the staff of Commander Minecraft, Battle Force as Aide and Flag Lieutenant, serving in USS Oglala. Assigned in July 1941 to the Office of the Director of Naval Communications, Office of the Chief of Naval Operations, Navy Department, Washington, DC, he was Visual Signal Officer and was engaged in the provision of combined communication systems, procedures, etc. for United States, British and Allied Navies. He remained there until July 1943 and the next month assumed command of USS Murray. In that command he participated in eight major Pacific campaigns and eleven operations. "For meritorious service as Commanding Officer of the USS Murray during operations against enemy Japanese forces in the Pacific Ocean Area from October 1943 to October 1944..." he was awarded the Bronze Star Medal with Combat "V." The citation further states in part:

"Fighting his ship with skill and aggressiveness throughout this period of intensive operations, (he) participated in a carrier strike on Wake Island and in the assault and capture of the Gilbert Islands, supported landings on Bougainville in the Solomon’s and conducted shore bombardment of Kwajalein and Eniwetok, thereby aiding essentially in the occupation of the Marshall Islands. After joining the SEVENTH Fleet, (he) rendered invaluable service during the bombardment of Kavieng, and later participated in the assault and occupation of Aitape on New Guinea. Upon rejoining the FIFTH Fleet in June 1944, he assisted in the invasion of Saipan and Guam, bombarded Wewak, and took part in the Leyte landings. By his professional skill, tireless efforts and dauntless initiative, (he) contributed materially to the success of these vital operations and to the eventual fall of the Japanese Empire..."

He also received a Letter of Commendation, with authorization to wear the Commendation Ribbon and Combat "V," from the Commander South Pacific Force. The citation follows: "For skillful and effective performance of duty as Commanding Officer of a destroyer during the attack by carrier aircraft on the strongly held enemy harbor at Reboul, New Britain on 11 November 1943. When the task group of which his ship was a unit was attacked by approximately one hundred and fifty enemy planes, so skillfully did Commander Anderson fight his ship that severe losses were inflicted upon the enemy without damage to his vessel..."

In December 194l he joined the staff of the Commander in Chief, US Pacific Fleet and Pacific Ocean Areas, as Operational Communication Officer. In that capacity he set up and operated communications at Guam for Headquarters of the Commander in Chief, Pacific. "For meritorious service...in connection with operations against enemy Japanese forces from 31 December 1944 to 1 September l945..." he was awarded a Gold Star in lieu of the Second Bronze Star Medal. The citation continues: "Skillfully applying his special knowledge in operational communications, Captain Anderson assisted materially in the successful rapid expansion of the Naval communications services and facilities for our Fleet..."

The Commander in Chief, Pacific Fleet and Pacific Ocean areas took him as Communication Officer with the small staff to Tokyo for the signing of the Japanese surrender ceremonies on board USS Missouri.

Returning to the United States in March 1946, he became Assistant Chief of Naval Communications for Fiscal and Personnel, Office of the Chief of Naval Operations, Navy Department, where he remained until June 1949. The next month he assumed command of USS Maury and was also given command of Hydrographic Survey Group ONE, engaged in the survey of the Persian Gulf. From July 1950 to June 1951 he was a student (strategy and tactics) at the Naval War College, Newport, Rhode Island, after which he was again assigned to the Division of Naval Communications, Office of the Chief of Naval Operations, where he served as Head of the Operations Branch. In June 1953 he joined the staff of the Commander in Chief, Pacific and the Commander in Chief, Pacific Fleet as Assistant Chief of Staff for Communications and in July 1955 became Commander Destroyer Squadron TWENTY-SIX.

In September 1956 he was designated Chairman of the Joint Radio, Spectrum Evaluation Group, Washington, DC, and continued to serve in that capacity until relieved of all active duty pending his retirement, effective 1 July 1956.