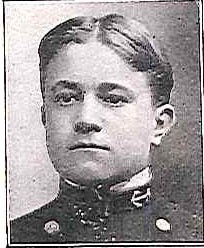 Donald Cameron Bingham was born in Talladega, Alabama, on August 8, 1882. He entered the US Naval Academy, Annapolis, Maryland, on appointment from his native state, on September 9, 1898, and was graduated on May 2, 1902. Detached from the Naval Academy on May 25, he served the two years at sea, then required by law, and was commissioned Ensign, to date from May 2, 1904. Subsequently advancing in rank, he attained that of Captain, to date from January 1, 1925, and was transferred to the Retired list of the Navy in that rank on June 30, 1937.

After graduation from the Naval Academy in May 1902, he was ordered to Asiatic Station, and upon arrival there on the T. S. Buffalo, reported to the Commander in Chief, Asiatic Fleet. As a “passed midshipman” he served on board USS New Orleans and USS Frolic, and when commissioned Ensign in July 1904 was transferred to the USS Mohican. He took passage to San Francisco in USS Solace in June 1905, and after a period of leave reported on September 28, 1905, to USS Illinois for duty. On June 7, 1907, he joined USS Tennessee, assigned to engineer duty, and when detached in August of the same year, was ordered to fit out USS Viper. He assumed command of that vessel on her commissioning, October 18, 1907, and remained in command until February 1909.

From February 17, 1909, until October 10, 1911, he successively commended USS Octopus and the Second Submarine Flotilla; and USS Grayling and the Third Submarine Division of the US Atlantic Torpedo Fleet. On November 14 he reported as Assitant Director of Target Practice and Engineering Competitions, and served in that capacity until May 29, 1913. Thereafter, until January 10, 1915, he was Ordnance Officer on board USS North Dakota. Next reporting to the Works of the Fore River Shipbuilding Company, Quincy, Massachusetts, to assist in fitting out USS Nevada, he was detached in July, before her commissioning, to serve as Squadron Gunnery Officer and Aide on the Staff of Second in Command, Atlantic Fleet.

On June 19, 1916, he was transferred to duty as Aide on the Personal Staff of Commander in Chief, Atlantic Fleet, and as Fleet Gunnery Officer, on board USS Pennsylvania, flagship. He served in that capacity during the entire period of World War I, April 1917 through November 1918. He was detached on June 30, 1919, and on August 5, that year, assumed command of the USS Huntington. After four months he was detached to report to the Naval War College, Newport, Rhode Island, where he completed instruction on November 20, 1920. He then commanded USS Sacramento until January 1922, after which he served in the Office of the Chief of Naval Operations Navy Department (Communications Division), Washington, DC, until August 1924.

From August 1924 until July 1926 he was Commanding Officer of USS Dobbin, and after brief duty in the Office of the Chief of Naval Operations, was a student at the Army War College, Washington, DC, until June 30, 1927. He again served in the Office of the Chief of Naval Operations, this time in the War Plans Division, from July 1927 until December 1928, when he reported as Commander, Mine Squadron ONE, Control Force, with additional duty in command of USS Oglala. A tour of duty in that Budget Office of the Navy Department, from December 2, 1930, until February 15, 1934, was followed by fifteen months’ sea duty as Commanding Officer of USS Maryland, and his assignment to the Staff of the Army War College, Fort Humphreys, DC. He remained there until relieved of all active duty pending his retirement on June 30, 1937.

Recalled to active duty on January 24, 1942, early in the World War II period, he reported to the Office of the Chief of Naval Operations, Navy Department, for duty with the Board of Economic Warfare. He later served in the Office of Procurement and Material throughout the war period until April 19, 1946, when he was again relieved of all active duty.

For World War I service Captain Bingham was awarded the Navy Cross, and cited: “For distinguished service in the line of his profession as Fleet Gunnery Officer on the Staff of Commander in Chief, US Atlantic Fleet,” In addition he had the Spanish Campaign Medal; Philippine Campaign Medal; Cuban Pacification Medal; Mexican Service Medal; and the Victory Medal with Atlantic Fleet Clasp. For World War II service he received as Letter of Commendation, with Ribbon, from the Secretary of the Navy, and was entitled to the American Campaign Medal; and World War II Victory Medal.

Captain Bingham contributed many articles to the Army and Navy Journal, and wrote book reviews on naval and military for various newspapers. Between his retirement and recall to active duty, he was active in Republic affairs in Montgomery County, Maryland, and was much interested in the work of the House of Mercy, of which he was Board Secretary.