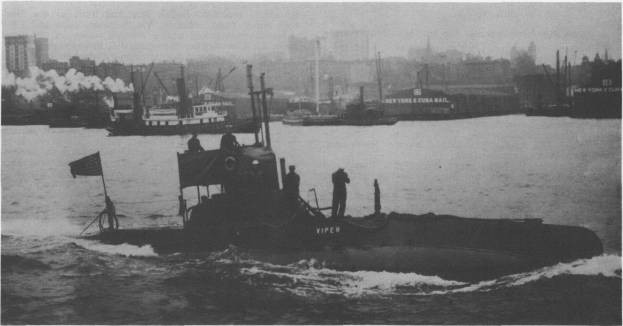 Caption: Viper (Submarine Torpedo Boat No. 10) heads up the East River toward the New York Navy Yard, with the piers and skyline of old Manhattan in the background. Canvas "dodgers" were rigged around the open bridges of these early submarines while on the surface to protect personnel from the water that came over the hull in anything but the flattest sea. (NR&L(0) 3992)

Any one of the limbless reptiles of the family Viperidae. This family includes many dangerously venemous snakes inhabiting Europe, Asia, and Africa.

The second Viper was one of six large galleys hastily built and commissioned in the summer of 1814 at Vergennes, Vt., for use by Commodore Thomas Macdonough against the British on Lake Champlain.

Under the command of Lt. Francis Mitchell, Viper participated in the capture of the British squadron, under Commodore George Downie, off Plattsburg, N.Y., on 11 September 1814, where she helped drive the surviving enemy gunboats back towards Canada. This stunning American naval victory ended English attempts to invade and split the United States in two by way of the Lake Champlain-Hudson River corridor, immeasurably strengthening the American bargaining position during peace negotiations at Ghent. Viper remained with the squadron for the remainder of the war but, with the return of peace, was partialy dismantled and laid up at Whitehall, N.Y., until sold there at public sale in 1825.