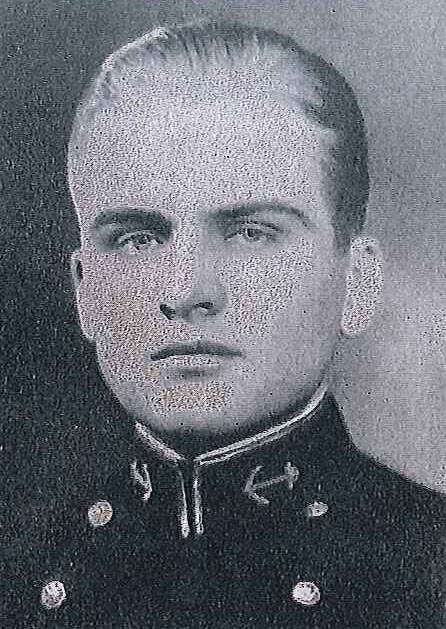 Earl Russell Eastwold was born in Canova, South Dakota, on August 17, 1909, son of the late R.R. and Ellen M. (Carlson) Eastwold. He entered the U.S. Naval Academy, Annapolis, Maryland, on August 31, 1928, on appointment from Minnesota, and was graduated with the degree of Bachelor of Science and commissioned Ensign in the U.S. Navy on June 2, 1932. He subsequently advanced in rank to that of Rear Admiral, to date from December 1, 1960.

After graduation from the Naval Academy in June 1932, he was assigned to USS New York (BB-34), in which he had navigation, engineering and gunnery duties until January 1935. He then reported to the Naval Air Station, Pensacola, Florida, for flight training, and he was designated Naval Aviator on April 9, 1936. Detached in May of that year, he joined the Aviation Unit of USS Cincinatti (CL-6) in June, and from June 1938 to June 1939 was Squadron Material Officer of Bombing Squadron 4, based on USS Range (CV-4), later on USS Saratoga (CV-3).

Promoted to Lieutenant in June 1940, during his tour of duty as an Instructor, Squadron 5 (carrier-type), at the Naval Air Station, Pensacola, he served from September 1940 until September 1941 as an Instructor, Carrier Training Unit, at the Naval Air Station, Opa Locka (Miami) Florida. He then joined Utility Squadron 5, the first radio-controlled squadron in the Atlantic Fleet, and was serving as Executive Officer of that Squadron at the outbreak of World War II in December 1941. He commanded the Squadron from June 1942 until June 1943, during which period he was promoted to Lieutenant Commander, to date from May 1942.

In July 1943 he formed Special Task Air Group 2, US Fleet, and commissioned the Group as Air Group Commander, in which capacity he served until March 1944. In April, that year, he joined USS Lunga Point (CVE-94) as Executive Officer. The Lunga Point won the Presidential Unit Citation with Star for heroic service during the Leyte, Luzon, Iwo Jima, Okinawa and final THIRD Fleet operations against the Japanese, and he was personally awarded the Bronze Star Medal and a Gold Star in lieu of the Second Bronze Star Medal, each with Combat "V." The citations follow, in part:

Bronze Star Medal: "For heroic achievement as Executive Officer of USS Lunga Point in action against enemy Japanese forces during the assault on Iwo Jima on February 21, 1945. When a blazing enemy suicide plane hit his ship during an attack by four hostile aircraft, Commander Eastwold immediately organized and directed the fire fighting parties until the flames were extinguished with minimum damage to the Lunga Point. Then supervising the evacuation of the wounded to an area of safety, he contributed materially to the saving of lives and property…"

Gold Star in lieu of Second Bronze Star Medal: "For meritorious service as Executive Officer of USS Lunga Point during operations against enemy Japanese forces in the Leyte, Luzon, Iwo Jima and Okinawa Campaigns. Skillfully directing the training of personnel, Commander Eastwold rendered valuable assistance to his commanding officer in maintaining the ship in a high state of readiness and, during a determined enemy air attack by at least seven planes on April 2, 1945, contributed materially to the destruction of at least five of the hostile aircraft Lunga Point. By his courage and devotion to duty, he was instrumental in bringing his ship through all campaigns safe…"

Detached from the Norton Sound in January 1951, he served from February of that year until July 1953 as Air Operations Officer on the Staff of the Commander in Chief, US Pacific Fleet, in the rank of Captain from April 1951. He commanded the Naval Auxiliary Air Station, Cabaniss Field, Texas, from August 1953 until July 1955, furthering of the Station's mission of advanced training for carrier student pilots. He then assumed command of the USS Tripoli (TCVU-64), which during the next year was engaged in transportation of aircraft and related equipment to European countries as a unit of the Military Sea Transportation Service.

From October 1956 until November 1957 he had command of USS Essex (CVA-9), which operated with the SEVENTH Fleet in the Western Pacific, transited around the Horn to the Atlantic for the SECOND Fleet operations (EX STRIKEBACK). Detached in November 1957, he became Chief of Staff to Commander Carrier Division TWO, which was assigned to SIXTH Fleet and SECOND Fleet operations. From February 1959 to July 1961 he was assigned to the Office of the Assistant Chief of Naval Operations (Fleet Operations), as Assistant for Fleet Air Defense to the Director, Surface Warfare Division, later Assistant Director of the Strike Warfare Division, after which he commanded Carrier Division SIXTEEN and Hunter Killer Force, U.S. Atlantic Fleet.

He was Assistant Chief of the Bureau of Naval Weapons for Field Support, Navy Department in September 1962 until July 1963, then assumed duty as Assistant Chief of that Bureau for Plans and Programs. On June 22, 1964 he reported as Deputy Chief of the Bureau of Naval Weapons, with additional duty from March 1, 1965 as Deputy Commanding Officer of the Naval Weapons Support Activity. In April 1966 he became Commander Middle East Force and for "exceptionally meritorious service from April 23, 1966 to April 30, 1967…" in that capacity was awarded the Legion of Merit. The citation further states in part:

"Exercising outstanding leadership and resourcefulness, Rear Admiral Eastwold provided superb direction and supervision of all elements of the Middle East Forces in a highly important area. By his superior tact and diplomacy in dealing with officials of Middle East Governments, he established and maintained excellent rapport, contributing immeasurably to the achievement of the United States [sic] objectives in that area…"

Assigned in June 1967 to the Office of the Chief of Naval Operations, Navy Department, he remained there until relieved of active duty pending his retirement, effective July 1, 1967.