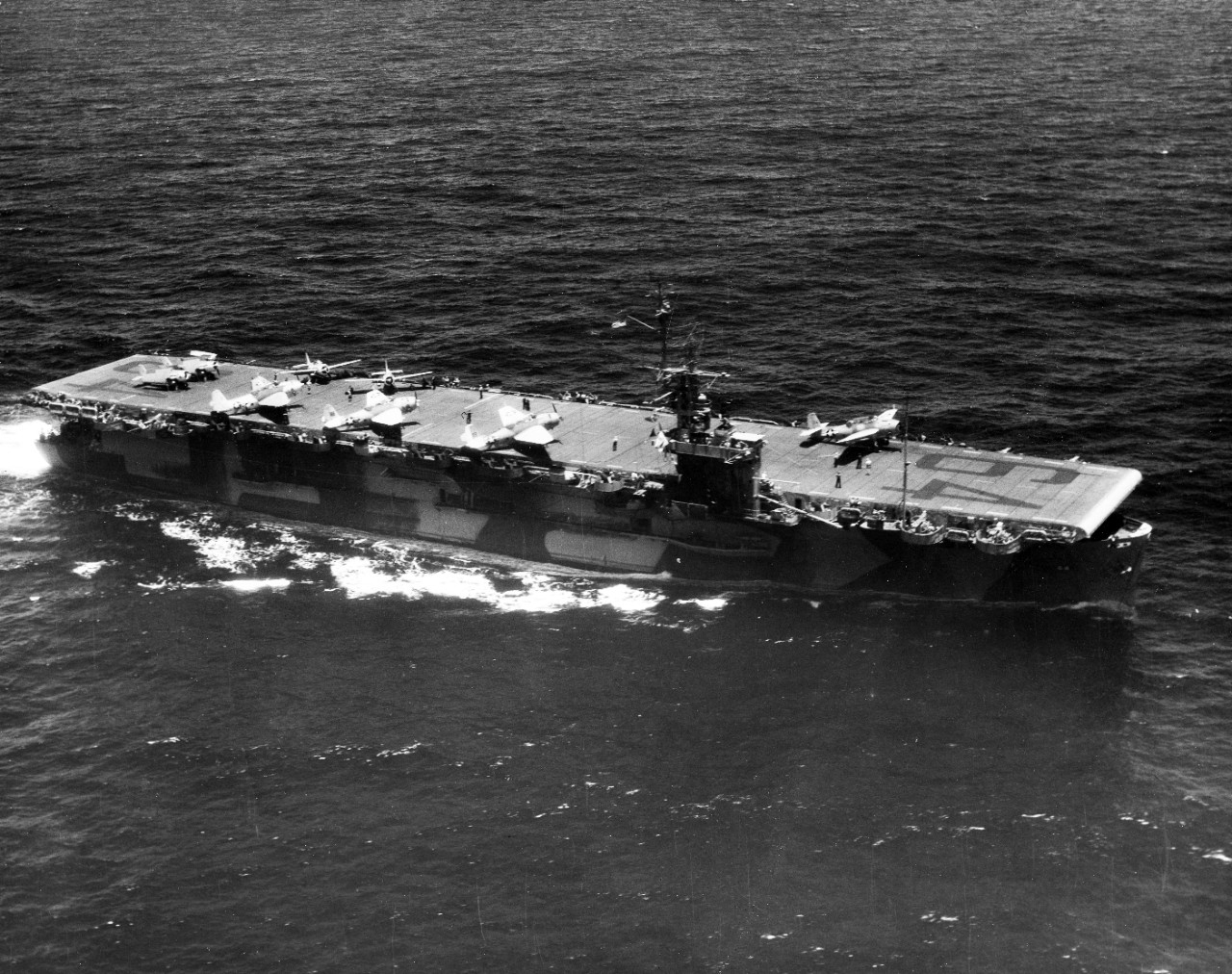 Aerial view of Tripoli (CVE-64), April 1944. Donation by Lynn McClain from the collection of Richard M. Newman during his naval service aboard Tripoli during World War II. Collection photo # 2016.11.01

A joint land-sea operation against Derna during the war between the United States and the Barbary state of Tripoli which resulted in the capture of that fortress city on 27 April 1805. After a long and grueling march across the desert from Alexandria, William H. Eaton, the American naval agent in the Barbary states, led a polyglot force of Arabs, Greek mercenaries, and a small detachment of Marines in storming the Tripolitan defensive positions. Gunfire from United States warships Hornet, Nautilus, and Argus, and the valor of the Marines, commanded by Lt. Presley Neville O'Bannon, USMC, were instrumental in achieving the American victory which has been immortalized by the phrase from the Marine Corps hymn, ". . . to the shores of Tripoli. . . ."

Didrickson Bay (ACV-64) was laid down at Vancouver, Wash., by the Kaiser Shipbuilding Co., under a Maritime Commission contract (M.C. Hull 1101) on 1 February 1943; was renamed Tripoli on 3 April 1943; launched on 13 July 1943; reclassified from an auxiliary aircraft carrier to an escort aircraft carrier on 15 July 1943; sponsored by Mrs. Leland D. Webb; and commissioned on 31 October 1943, at Astoria, Oreg., Capt. Wendell G. Switzer in command.

Following shakedown training off the California coast, the escort carrier entered the repair base at San Diego, Calif. There, on 4 January 1944, gasoline was inadvertently and unknowingly dumped into the water around the forward part of the ship, on the starboard side. Acetylene torch sparks set the volatile mixture ablaze, and flames quickly spread from the bow to frame 82, engulfing the forward gallery walkway and the island superstructure. Yardcraft and the ship's force battled the flames and soon had the blaze under control, but not before one man had died. 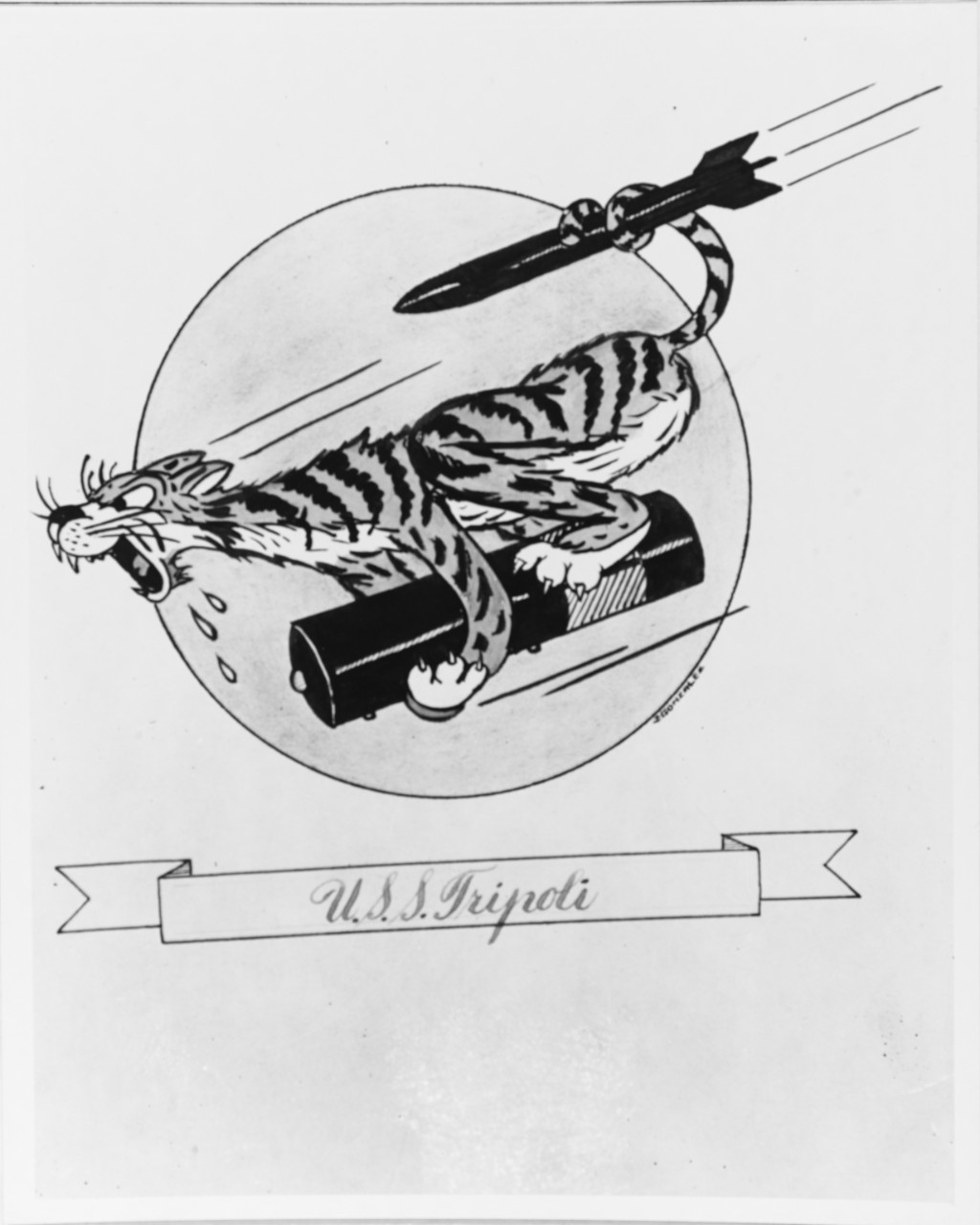 Subsequently repaired, Tripoli departed San Diego on 31 January 1944, bound for the Panama Canal and duty with the Atlantic Fleet. She arrived at her new homeport, Norfolk, Va., on 16 February. Embarking Composite Squadron 13, Wildcat fighters and Avenger bombers, the escort carrier put to sea on 15 March as the center ship in Escort Carrier Task Group (TG) 21.15. Supported by five escort vessels of Escort Division (CortDiv) 7, Tripoli patrolled west of the Cape Verde Islands to break up German U-boat refuelling activities in that area.

After providing air cover for a convoy routed to the British West Indies, Tripoli's covey of Wildcats and Avengers searched the sea lanes northwest, southwest, and west of the Cape Verdes before putting into Recife, Brazil, on 5 April 1944 to refuel and provision. Back at sea again two days later, Tripoli continued the routine of daily launchings and recoveries of her planes, guarding the Allied sea lanes against the incursions of U-boats.

About one hour before sunrise on 19 April 1944, one of Tripoli's Avengers made radar contact with a German U-boat as the submarine cruised on the surface awaiting the arrival of her "Milch Cow" or refuelling partner. The enemy, U-51t3, put up a spirited antiaircraft barrage while the Avenger made three attacks. A pattern of rockets bracketed the dodging, twisting submarine on the first pass as the Germans prepared to "pull the plug" and dive for comparative safety. On the second run, the plane's depth charges failed to release, giving the enemy submersible all of the time she needed to dive. Leaving only swirling water, the U-boat evaded the plane's last attack, a mine dropped in the tell-tale swirl but, in so doing, also missed her fuelling rendezvous with "Milch Cow" U-408.

Returning to Norfolk on 29 April 1944, Tripoli underwent voyage repairs before embarking Composite Squadron 6's 12 Avengers and 9 FM-2 Wildcats. She then formed up with CortDiv 7 and departed Hampton Roads on 24 May for further searches in the vicinity of the Cape Verdes. Four days out, she changed course to intercept a German submarine estimated to be proceeding southwest from a position west of the Madeira Islands. When no contact was made by 30 May, Tripoli and her consorts steamed north to rendezvous with a convoy bound for Nova Scotia.

Following her return to Norfolk on 18 June 1944, Tripoli spent two months in carrier qualification training off Quonset Point, R.I., before making port again at Norfolk on 15 July. Embarking Composite Squadron 6, she conducted two weeks of pilot qualifications in the Chesapeake Bay area before departing Hampton Roads on 1 August, bound for her new base of operations, Recife.

Screened by O'Toole (DE-527) and Edgar G. Chase (DE-16), the escort carrier proceeded south until 1 August, when O'Toole developed a sonar contact and gave chase. Tripoli's planes laid patterns of sonobuoys at the initial point and dropped smoke floats and float lights on an oil slick. Picking up the "scent," O'Toole straddled the floats with her hedgehog projectiles and depth charges and soon radioed victoriously "We hit the rodent!" A brief visual examination of the evidence, debris and a large quantity of diesel oil, satisfied the hunter-killer group that they had indeed sunk an enemy submarine. However, a post-war examination of German records did not confirm the kill. As night fell, Tripoli vectored two planes to another sonar contact by O'Toole, and four depth bombs thundered, thrashing the sea, keeping another U-boat down and running.

Tripoli and her group then returned to Recife on 13 August 1944 and reported for duty with Admiral Jonas H. Ingram's Fourth Fleet. Designated as the center of TG 47.7, the escort carrier put to sea on 22 August with the four escort vessels of CortDiv 24 to operate against a homeward-bound German submarine estimated to pass at 25° south latitude and 5° west longitude.

After a fruitless search pursuing two fading sonar contacts in the mid-South Atlantic narrows, Tripoli and her group returned to Recife on 11 September 1944 for provisioning and fuelling. Underway again two days later, TG 47.7 headed out to conduct another search, this time along the estimated track of two U-boats slated to rendezvous for refuelling. One of the target U-boats was U-1062, a "Milch Cow" bound from Penang, Malaya, with a cargo of valuable petroleum products for the German war effort. Ordered to fuel U-219, outward-bound for the Far East, U-1062 prepared to rendezvous with her smaller sister boat in the South Atlantic narrows—directly in the path of the Tripoli escort group.

Passing to the westward of the Cape Verdes, TG 47.7 made rendezvous with the Mission Bay (CVE-59) escort group to conduct a joint hunter-killer operation against the two enemy boats. Round-the-clock searches by prowling, radar-equipped Avengers continued with unrelaxed vigilance until 40 minutes after sunset on 28 September 1944, when a TBF piloted by Lt. William R. Gillespie, USNR, reported a definite contact with the surfaced U-219 only 11 miles from the enemy's estimated track.

Gillespie went in to conduct a low-level rocket attack, but heavy flak slapped the intrepid airman's plane and crew into the sea. Another Avenger, drawn to the battle, braved the maelstrom of flak to conduct another rocket run and also dropped depth bombs, while a Wildcat strafed the twisting and turning U-boat which struggled desperately to dodge the harassing attacks by the American planes.

Indeed, U-219 emerged from the fracas unscathed; but U-1062 did not enjoy similar good fortune. Fessenden (DE-242), one of Mission Bay's screen, homed in on sonobuoy indications on 30 September 1944 and killed the "Milch Cow" with a four-charge pattern. In the meantime, U-219 was not yet out of the proverbial woods, one of Tripoli's Avengers dropped depth bombs on the fleeing boat on 2 October. Keen-eared American sonar-men felt that they had definitely "killed" the submersible, but postwar accounting showed that U-219 had escaped to Batavia, Java.

When fuel supplies ran low, Tripoli came about and made port at Recife on 12 October 1944. She conducted one further search of the narrows from 26 October to 12 November before heading for a much-needed overhaul at Norfolk. Subsequently, the escort carrier sailed for the Pacific and, after transiting the Panama Canal and touching at San Diego, arrived at Pearl Harbor 10 days into the New Year 1945.

Tripoli transferred Composite Squadron 8 ashore to conduct operations from Hilo, Hawaii, before she loaded a miscellaneous cargo of fighters and bombers to be offloaded at Roi, in the Marshall Islands, where she made port on 20 February 1945. Returning to Pearl Harbor after this ferry run, the escort carrier commenced training operations which would continue through the end of the war and into the late fall of 1945. With Japan's surrender and the welcome end to hostilities in the Pacific, Tripoli was assigned to the gigantic "Magic Carpet" operation.

Arriving at San Diego on 29 August 1945 with 500 Navy veterans, Tripoli returned to Pearl Harbor on 8 September before resuming local operations, including night carrier qualifications, through November. She subsequently made one trip with Army passengers to San Pedro, Calif., and a further "Magic Carpet" run to San Diego. The carrier departed the west coast on 15 January 1946 for deactivation overhaul at Norfolk. On 22 May 1946, the need for her services no longer pressing, Tripoli was decommissioned and laid up, in reserve.

Communist aggression in Korea in the summer of 1950 resulted in the return of many of the Navy's reserve ships to active service to support American operations in the Far East. Acordingly, Tripoli was recommissioned at New York on 5 January 1952, Capt. Raymond N. Sharp in command. Assigned to the Military Sea Transportation Service (MSTS), Atlantic Area, the erstwhile "hunter-killer" began her new career as an aircraft transport and ferry. 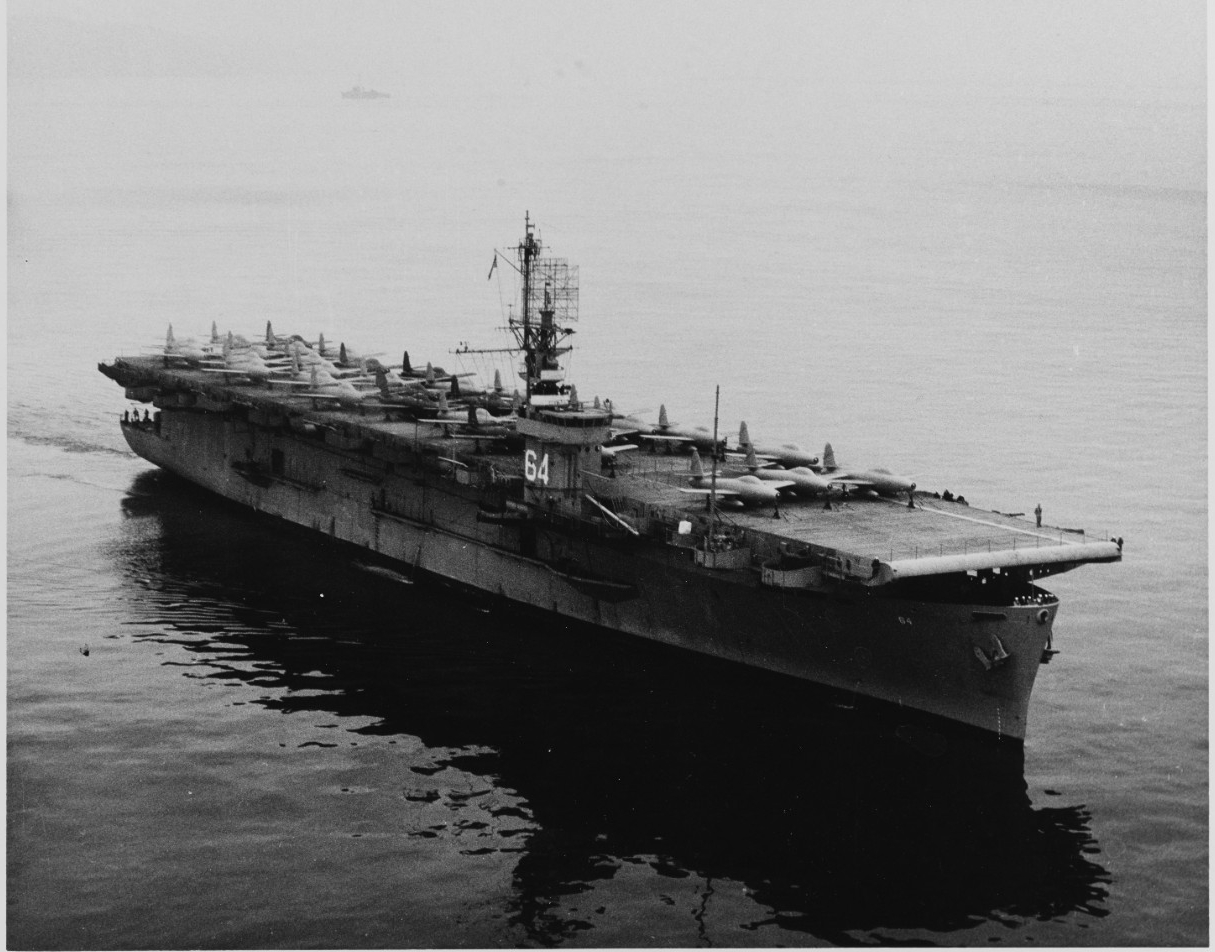 Tripoli (CVE/CVU-64) underway, probably during the middle 1950s, while transporting Republic F-84 Thunderjet fighters. This image was received by the Naval Photographic Center in December 1959, but was taken several years earlier. Official U.S. Navy photograph from the collections of the Naval History and Heritage Command, NH 106568.

Over the next six years, Tripoli conducted 44 transport voyages, mostly to European and Mediterranean ports but with one visit to Hawaii and two to the Far East. Following the ship's third voyage to Europe, Tripoli was berthed at the Port Newark Terminal on 5 August 1952 where she loaded 45 Republic F-84 Thunderjet aircraft, 90 wingtip fuel tanks, and related gear for transport to the Far East. After going to sea on 7 August, bound for Japan, Tripoli steamed via the Panama Canal and San Diego and made port at Yokosuka with her vital cargo on 5 September, where cranes lifted the reinforcements ashore, soon to be in action in their ground-attack role in Korea. After onloading battle-damaged aircraft for repairs in the United States, the carrier embarked 245 Navy and Marine Corps personnel for rotation back to Alameda Naval Air Station, Calif. Making port on the west coast on 22 September, she then put to sea for the Far East a second time, once again carrying jet aircraft to Yokosuka, as well as transporting men of the Sea Echelon of Boat Unit 1. Loading a cargo of helicopters and military passengers, Tripoli returned to the west coast and arrived at Alameda on Armistice Day 1952. Subsequently making her sole Hawaiian voyage under MSTS, Tripoli then headed east to finish out her career with transport voyages to European and Mediterranean ports.

Receiving "smart ship" awards from MSTS in the intervening years, Tripoli was reclassified a utility carrier and redesignated CVU-64 on 12 June 1955. Operated as  T-CVU-64, Tripoli was decommissioned at New Orleans, La., on 25 November 1958 and subsequently struck from the Navy list on 1 February 1959. Her hulk was then scrapped by a Japanese firm in January 1960.