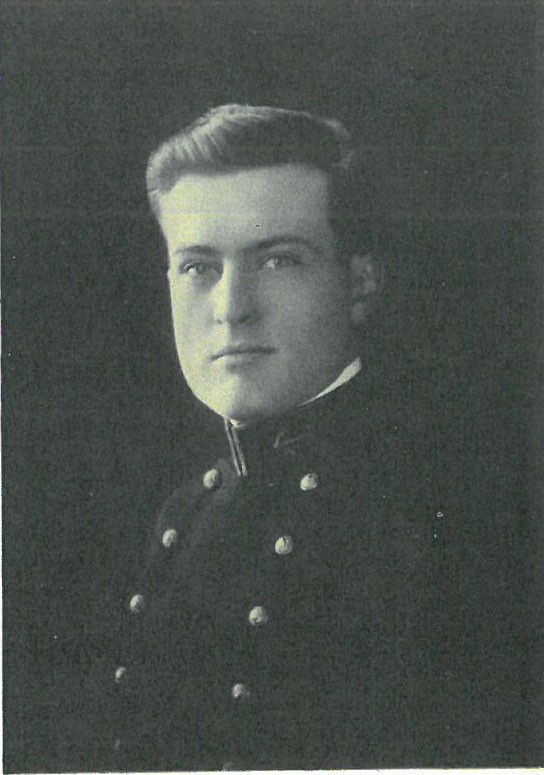 Wilder DuPuy Baker was born in Topeka, Kansas, on July 22, 1890, son of Isaac N. and Mary DuPuy Baker. He attained Eastern High School in By City, Michigan, before his appointment to the US Naval Academy, Annapolis, Maryland, from Michigan in 1910. Graduated and commissioned Ensign on June 5, 1914, he subsequently attained the rank of Captain on May 1, 1941. He was promoted to Rear Admral on May 29, 1943, to rank form July 13, 1942. Transferred to the Retired List of the US Navy on August 1, 1952 (statutory age), he was advanced to the rank of Vice Admiral on the basis of combat awards.

After graduation in 1914, he served in USS Florida, USS Jason, and in USS North Carolina, the latter operating in Syrian waters until June 1915. Returning to the United States, he served aboard USS Dubuque for a year, and had submarine instruction in USS Fulton until January 1917, when he joined  USS Frederick. In April of that year he was assigned duty in connection with fitting out USS F-1, and served aboard that submarine from her commissioning June 13, 1917, until October of that year. He then joined the submarine L-11, which operated in Irish waters during World War I.

Detached from the L-11 in March 1919, he commanded USS L-3 until March 1920, when he was transferred to duty as Engineer and Repair Officer of Submarine Division 5, in which assignment he served until July 1922. He fitted out USS S-11, and assumed command on her commissioning, January 11, 1923. Two months later he was transferred to command of  USS T-2, serving briefly in that command before fitting out and commanding USS S-13 from her commissioning on July 14, 1923, until May 1924. For a year thereafter he had duty at the Navy Yard, Portsmouth, New Hampshire.

Returning to sea, he served as Executive Officer of USS Marcus from October 1925 to August 1926, and the two succeeding years commanded USS Kidder. From September 1928 until June 1930 he had duty in the Division of Fleet Training, Office of the Chief of Naval Operations, Navy Department, Washington, DC. In July 1930 he joined USS Wyoming, to serve as First Lieutenant until December 1931, and as Gunnery Officer of that battleship until May 1933.

Completing the junior course at the Naval War College, Newport, Rhode Island, in May 1934, he had duty with the General Board, Navy Department, for a year and from October 1935 until March 1936 served as Assistant Naval Attache at the American Embassy, London, England. After his return to the United States, he reported as Aide and Flag Secretary on the staff of Commander Special Service Squadron, and remained in that assignment until the following August. In September he became Commander Destroyer Division 7, and from June 1937 to May 1938 commanded Destroyer Division 22.

Reporting in May 1938 for duty in connection with the Naval Reserve Officers Training Corps Unit of Yale University, New Haven, Connecticut, he served from April 1939 to June 1940 as Professor of Naval Science and Tactics there. In November 1940 he returned to sea in command of Destroyer Squadron 31, and from March 1942 had brief duty as Anti-Submarine Warfare Officer on the Staff of the Commander in Chief, Atlantic Fleet, with additional duty in command of the Anti-Submarine Warfare Unit, Atlantic Fleet. From May until November 1942 he served on the Staff of the Commander in Chief, US Fleet at Headquarters, Navy Department, Washington, DC.

On December 5, 1942 he assumed command of USS North Carolina, and continued in command of that battleship until May 27, 1943, while she was engaged in patrol and support missions in the Pacific. From June 10, 1943 until March 31, 1944 he served as Commander Cruiser Division ONE. He was awarded the Navy Cross “For extraordinary heroism as Commander Task Force 94, in action against enemy Japanese forces in the Pacific Ocean Areas, from June 1943 to March 1944…..” The citation continues in part:

“…..(He) not only directed his forces under adverse weather conditions in the first surface bombardment of the Japanese home island, but also led the first offensive operations in the Sea of Okhotsk. By his aggressive and determined leadership, great personal valor and professional valor and ability, he was responsible for the successful completion of all operations undertaken against the enemy without casualties or damage to his own forces…..”

In April 1944 he was designated Commander, Cruiser Division 14, and in July of that year was assigned duty as Chief of Staff and Aide to Commander Second Fast Carrier Task Force, Pacific Fleet. He was awarded the Silver Star Medal, the Legion of Merit, and the Bronze Star Medal, with the following citations:

Silver Star Medal: “For conspicuous gallantry and intrepidity as Chief of Staff to the Commander Task Group THIRTY EIGHT Point ONE, SECOND CARRIER TASK FORCE, in action against enemy Japanese forces off Formosa, from October 13 to 15, 1944. Employing smoke and high speed maneuvering while interposing his Task Group between two crippled cruisers and a major enemy air threat, (he) insured the successful withdrawal of the ships and their eventual salvage….”

Staff of the Commander SECOND CARRIER TASK FORCE, Pacific, during operations against enemy Japanese-controlled Palau Islands, the Philippines, the Nansei Shoto Group, Formosa, and the Coast of the Indo China, from August 18, 1944 to January 25, 1945….(He) contributed materially to the highly efficient execution of these missions and, by his skill in maneuvering the ships of the Task Force against sustained enemy aerial attack, succeeded in bridging an extremely high percentage of ships unscathed through these actions and made possible the infliction of tremendous damage on the enemy by the aircraft based on carriers in the Task Force…..”

Bronze Star Medal with Combat “V”: “For meritorious achievement while serving as Chief of Staff to Commander SECOND CARRIER TASK FORCE Pacific, during operations against enemy Japanese forces from April 10 to September 2, 1945. Skillfully assisting in directing the Task Force during extended periods of combat, (he) contributed to the success of coordinated devastating attacks against the Japanese homeland and to bringing all major ships through this period without damage….”

In October 1945 he was ordered to the Bureau of Naval Personnel, Navy Department, Washington, DC, for temporary duty, On January 2, 1946, he reported as Commandant, US Naval Base, Boston, Massachusetts. In June 1947 he was ordered to duty as Commander Service Force, Atlantic Fleet, and served in that capacity until December 1948. In February 1949 he assumed duty as Commandant Eleventh Naval District with additional duty as Commander Naval Base, San Diego, California, and Commander Southern California Sector, Western Sea Frontier. He continued to serve as such until relieved of all active duty pending his retirement on August 1, 1952.