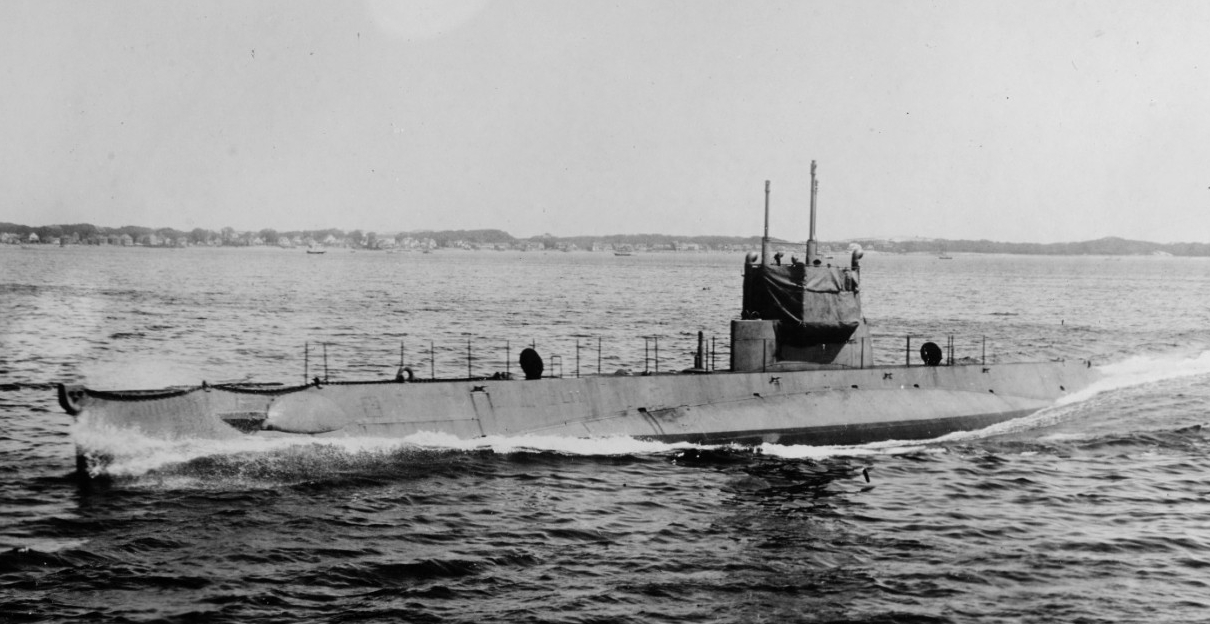 L-11, upon her commissioning, was assigned to Division Six, Submarine Flotilla, Atlantic Fleet. She cleared the Boston Navy Yard for trials and maneuvers on 19 August 1916, and made her return on the 27th. Getting underway again on 9 September, she proceeded to Newport, R.I. (10 September–18 October). After this time in the waters of New England, she transited southward stopping along the Atlantic seaboard at Tompkinsville [Staten Island], N.Y. (19–20 October); Hampton Roads, Va. (22–23 October); Rappahannock Spit, Va. (23–24 October); Norfolk Navy Yard, Portsmouth, Va. (24–27 October) before returning to the Boston Navy Yard on 30 October. She remained there until 23 December, when she again got underway for a visit to southern waters. She arrived at Charleston, S.C. (28–30 December) and Jacksonville, Fla. (31 December–2 January 1917) en route to Key West, where she reached on 4 January. Departing on 22 January, she continued on to Dry Tortugas, Fla. (22–26 January) en route to Pensacola, Fla., to conduct training (28 January–20 February). She then made a run to Key West (22–24 February), before returning to Pensacola for additional training exercises on 26 February.

During the time the submarine conducted training, relations between the U.S. and Germany had become strained by the latter’s resumption of unrestricted submarine warfare on 1 February 1917. As the result of these heightened tensions, L-11 was ordered to proceed to Hampton Roads. Departing Pensacola on 27 March, she transited via Key West (30–31 March) and stood in through the Virginia capes to Hampton Roads on 5 April. The following day, the same day the U.S. declared war on Germany, the submarine shifted to the Norfolk Navy Yard. Underway again, she departed Hampton Roads on 9 April and after touching at the Ambrose Channel (11 April), stood in to Submarine Base, New London, Conn. on the 12th. Here at Base No. 22, her crew received instruction and underwent training. L-10 (Submarine No. 50), with her fellow division units, L-9 (Submarine No. 49) and L-11, received orders on 30 April directing them to re-locate to Boston Navy Yard for scheduled maintenance. They were to convoy with the submarine tender Tonopah (Monitor No. 8). Departing on 6 May, the submarines transited the Cape Cod Canal and stood in to Boston and docked at the Navy Yard for overhaul on 8 May. That yard work continued in to October.

Having charted a direct course to the Azores, Hart’s force ran into a gale. L-11 parted lines with Bushnell in heavy weather on 7 December 1917. She then proceeded under her own power, alternating engines to conserve fuel, on a direct course for the Azores. She arrived at Flores Island, Azores on 20 December. She then departed on 22 December, escorted by Wheeling (Gunboat No. 14) and stood in to Ponta Delgada (Base No. 13) on 23 December and went alongside L-10 at the breakwater. During the submarine’s crossing to the Azores, on 19 December, the Admiralty suggested that the U.S. L-class submarines be designated “AL” while serving in European waters so as to avoid confusion with British L-class submarines. Headquarters, U.S. Naval Forces Operating in European Waters, at Grosvenor, London, England, issued an official statement about this change on 22 December.

Following a period of repair, L-11 got underway to conduct a patrol of the Azores (3–6 January 1918) to deny German U-boats or surface raiders use of the archipelago as a refuge. At the conclusion of the mission, the boat returned to Base No. 13 and secured alongside Bushnell.

On 22 January Bushnell, Genesee (Fleet Tug No. 55), and submarines L-1, L-2, L-4, and L-11 stood out from Ponta Delgada bound for Queenstown [Cobh] (Base No. 6), Ireland. They arrived on 27 January and secured in the harbor. Though under the nominal command of Vice Adm. Sims, Hart’s U.S. submarines in Ireland, were subject to the authority of Vice Adm. Sir Lewis Bayly, RN, Commander-in-Chief, Coast of Ireland, and his submarine commander, Capt. Sir Martin E. Nasmith (later Dunbar-Nasmith), RN. Bayly initially ordered Hart to deploy only one of his submarines at a time at sea, and that Royal Navy officers were to always be informed of departures and returns. Their patrol area was also to be limited to seaward of the Fastnet Light, so as to keep clear of British patrols and to avoid potentially fatal friendly-fire incidents.

The base at Queenstown, however, proved unsatisfactory for Lt. Cmdr. Harold M. Bemis’ Division Five, as it was also serving as the headquarters for the surface patrol forces. As a result, the U.S. submarines were relocated to a base at Berehaven [Castletownbere], Bantry Bay on 5 February. In the ensuing days (6–16 February), the division trained in Bantry Bay conducting dives and tactical maneuvers under the charge of the commander of the Royal Navy’s Submarine Flotilla also based at Berehaven. U.S. submarine officers also trained with a “submarine attack war game” apparatus on board the submarine depot ship HMS Vulcan. The U.S. submarines’ patrols were to be based on eight-day rotations, there would be eight days on patrol and eight days in port for overhaul, re-provision, and rest in preparation for the next eight-day patrol.

AL-11 fell in with this rotation and conducted her patrols in accordance with the schedule. She arrived at Queenstown on 15 April and moored alongside Melville (Destroyer Tender No. 2) at the Haulbowline Shipyard, for maintenance. The submarine returned to Berehaven at the completion of her yard work, stood out to conduct a patrol on 25 April. She made an attack with two torpedoes on a suspected U-boat with negative results on 11 May. After another patrol, the boat arrived at Queenstown for refit on 2 June. With the work completed, AL-11 stood out from Queenstown on 24 July, bound for Berehaven they reached later that day. She was underway again on patrol four days later. AL-11 reported sighting an enemy submarine at 6:15 p.m. on 29 September 1918, but did not fire upon the boat. AL-11 continued her ASW patrolling duties to the war’s end with the Armistice of 11 November. 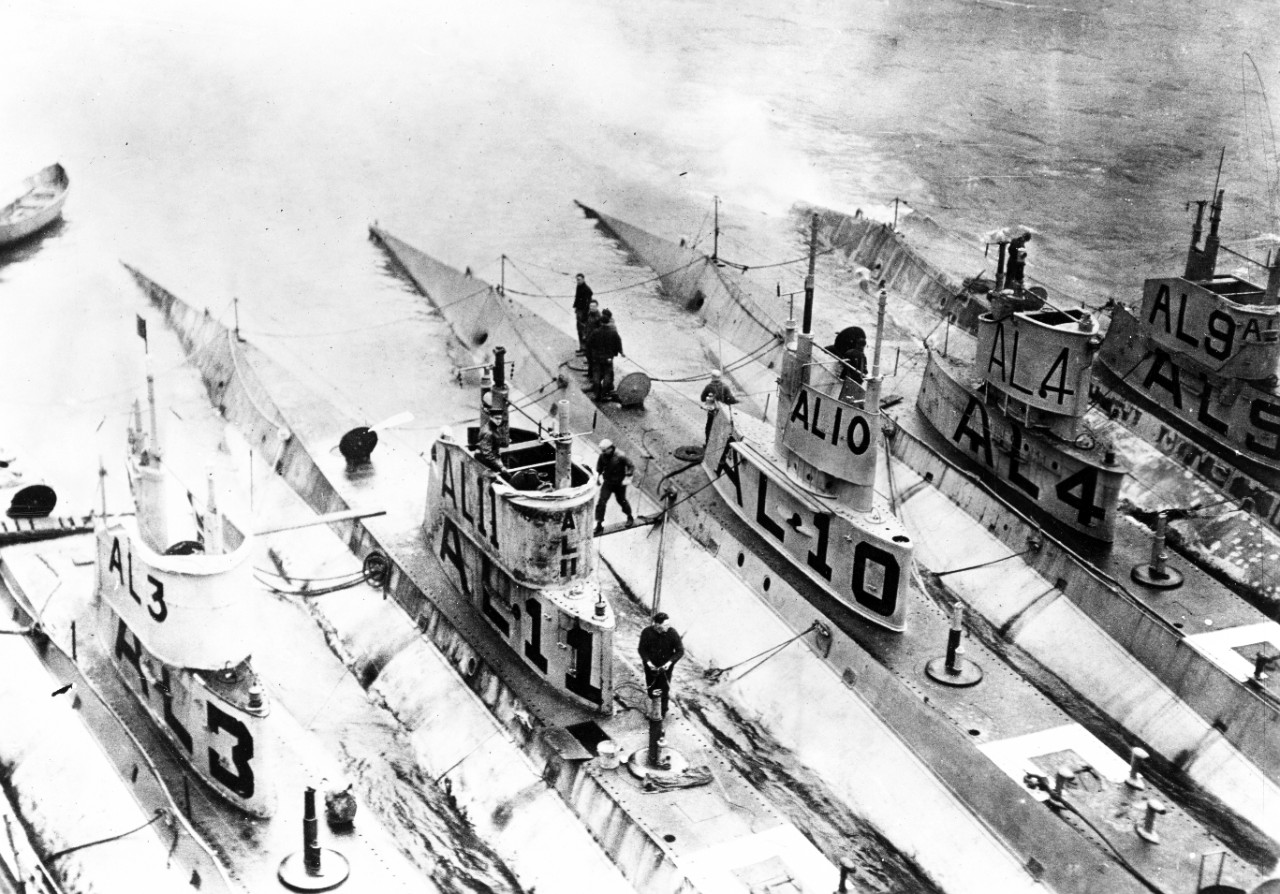 Caption: L-class submarines alongside their tender, in British waters during World War I. The tender is probably Bushnell. The location of the photograph is probably Berehaven, Ireland. Submarines are (from left to right): AL-3 (Submarine No. 42); AL-11; AL-10 (Submarine No. 50); AL-4 (Submarine No. 43); and AL-9 (Submarine No. 49). Note differing forms of chariot bridges on these submarines; white markings on their foredecks; and 3-inch/23 deck guns in retracted position, just forward of the submarines' fairwaters. (Naval History and Heritage Command Photograph NH 60252)

After the Armistice, L-11 shifted from Berehaven and operated from Portland, England, until 3 January 1919, when she cleared the British port for a return to the United States. Transiting westward via the Azores and Bermuda, she stood in to the Philadelphia (Pa.) Navy Yard on 1 February. 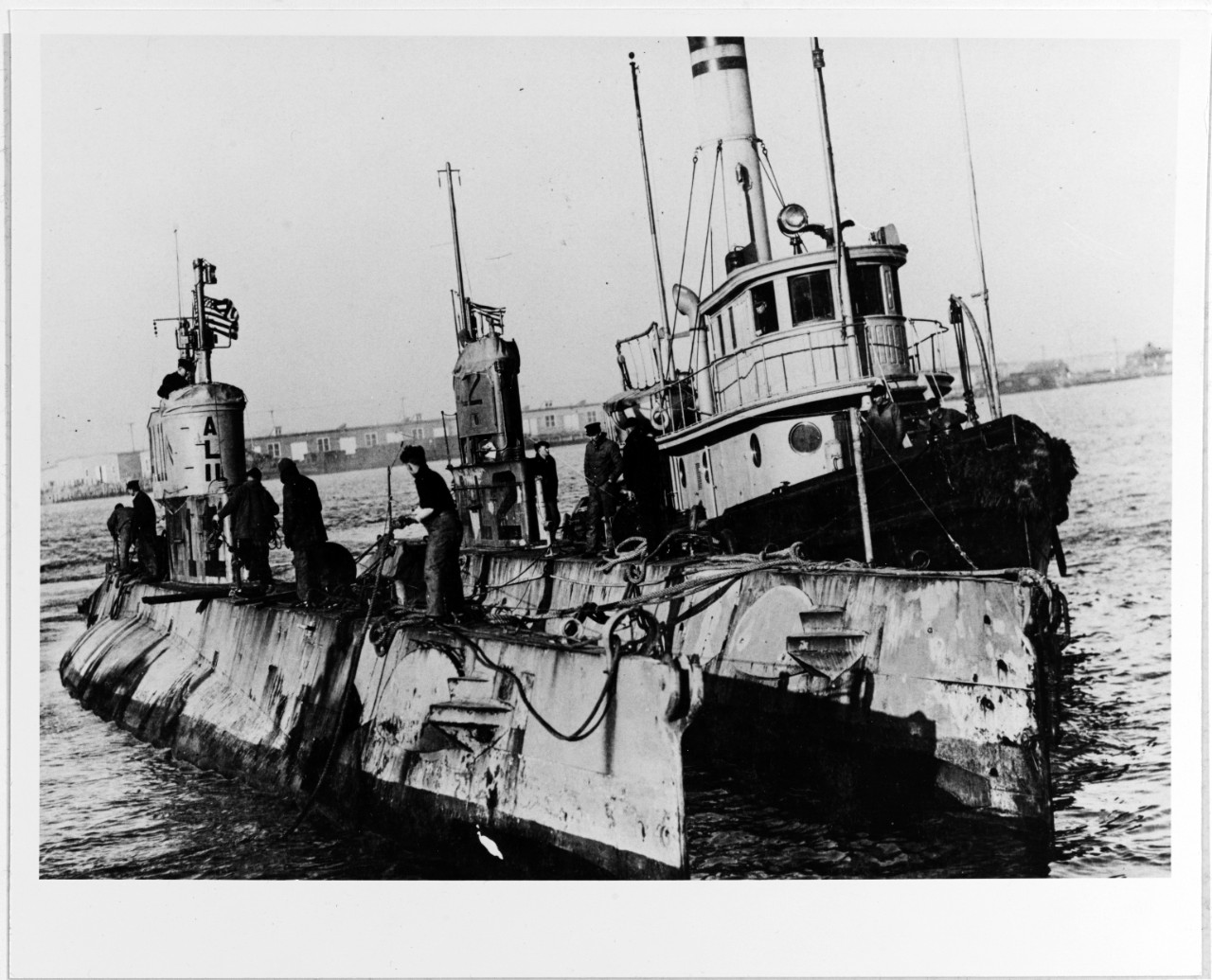 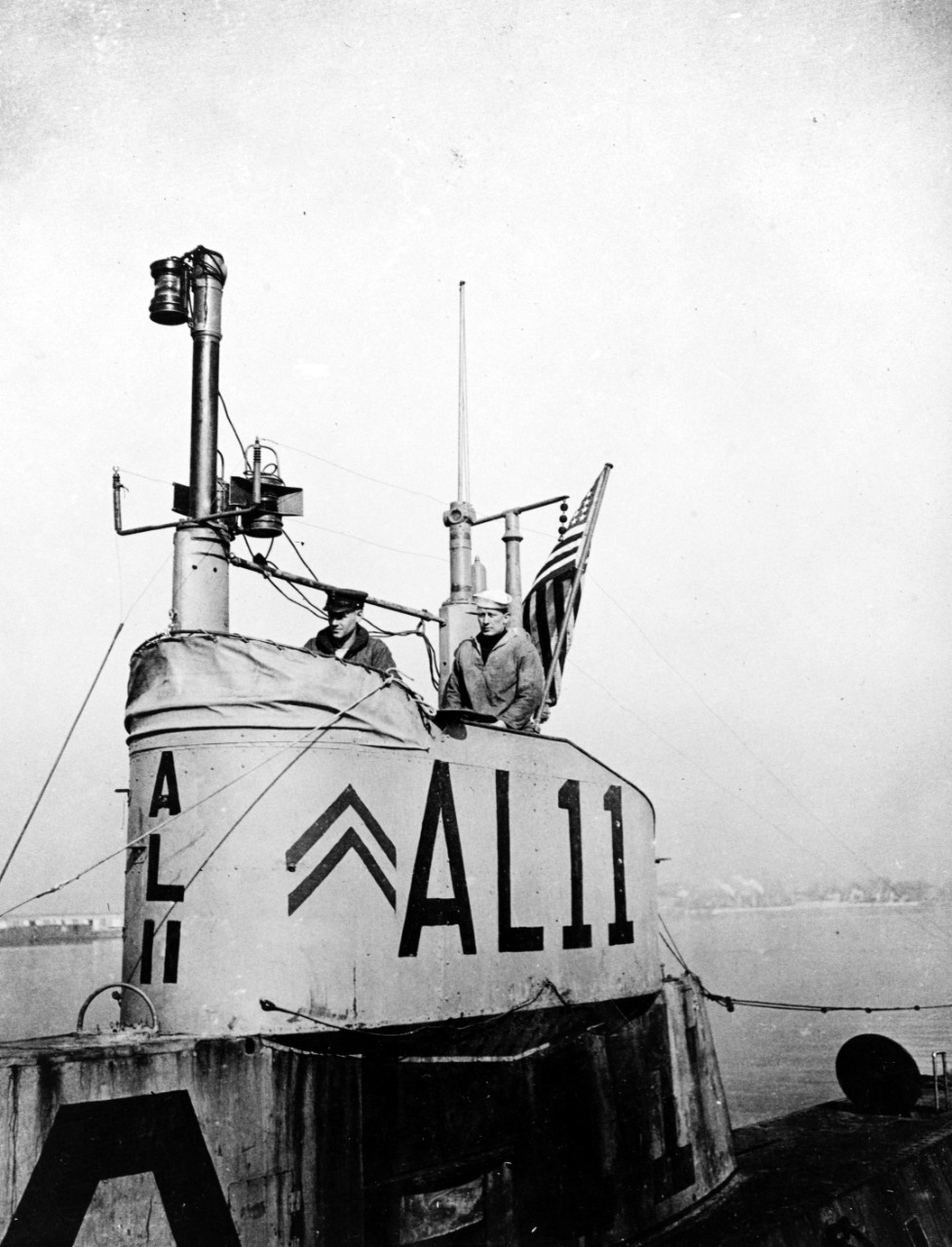 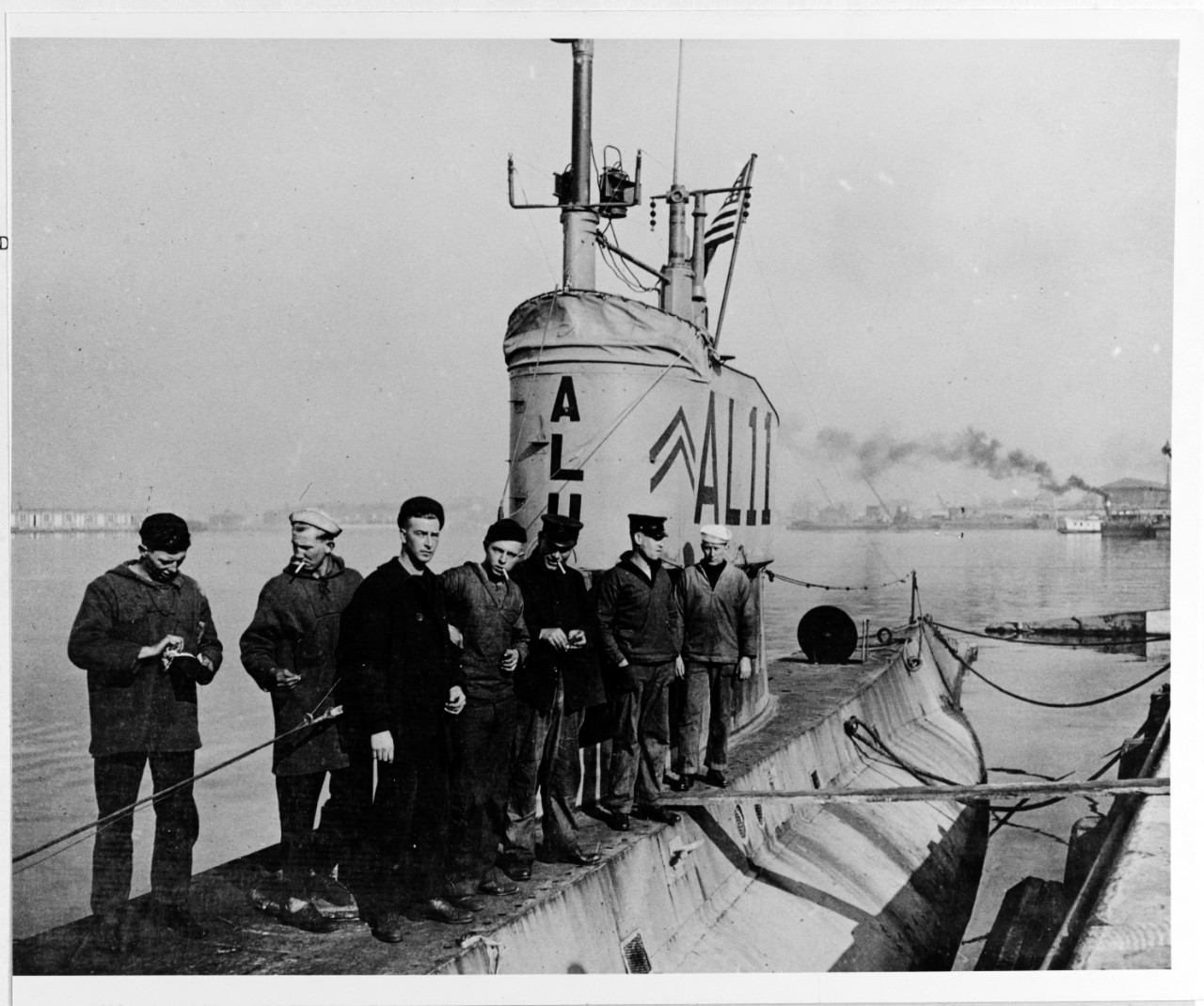 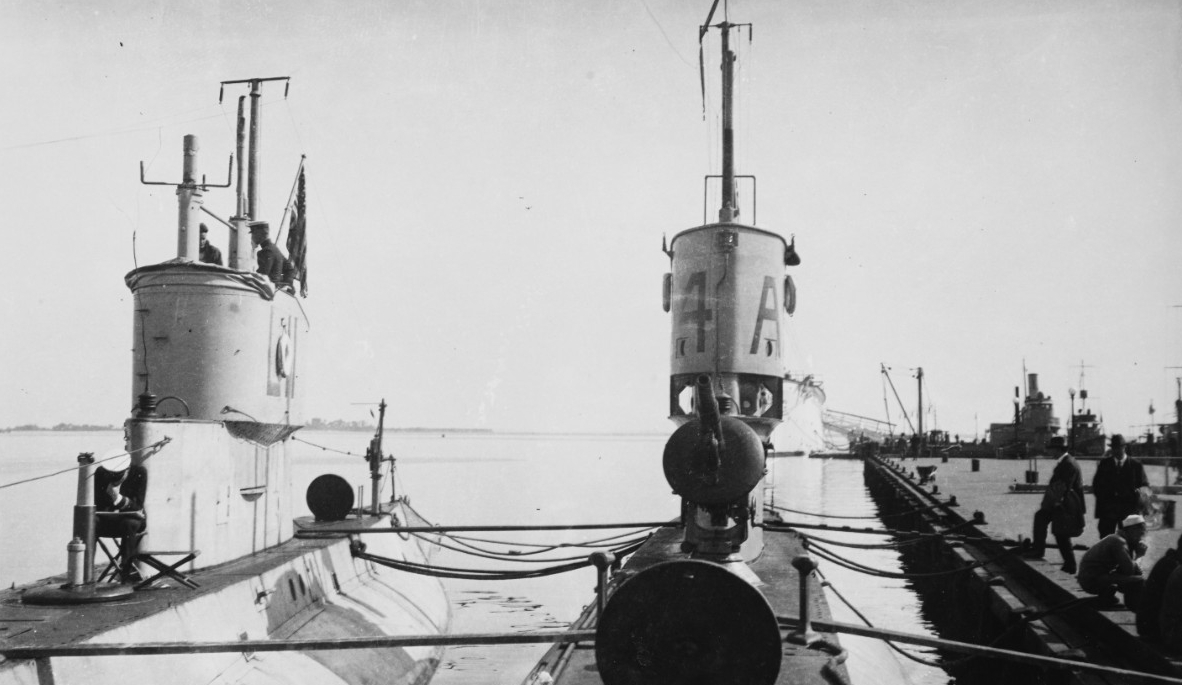 L-11 operated off the East Coast developing submarine warfare tactics for the active remainder of her career. During this period, on 17 July 1920, she was redesignated SS-51 as part of a Navy-wide administrative re-organization. Shortly, afterward she entered the dry dock at the Norfolk Navy Yard on 27 July for urgent repairs. After clearing the yard, L-11 proceeded up the James River on 14 September and visited Richmond, Va. (15–20 September) as part of a Navy recruiting drive. Afterward, she transiting back down the river into the Chesapeake Bay. She then proceeded north to conduct a similar recruiting visit at Baltimore, Md. (28 September–7 October). L-11 went to sea bound for Bermuda, on 16 October, but was forced to return to Submarine Base, Hampton Roads due to engine trouble. She then departed with E-1 (Submarine No. 24) on 22 October to make a recruiting visit to Annapolis, Md. via Baltimore.

On 16 November 1920, the Office of Naval Operations issued orders directing that L-11 be prepared for transfer to the Submarine Repair Division at the Philadelphia Navy Yard. She arrived at the Philadelphia Navy Yard on 27 January 1921 and placed in an inactive status. On 26 March, Repair Division was abolished and L-11 was reassigned to Submarine Division Three. She was then placed “in ordinary” on 1 June.  Just over eight months later, on 10 February 1922, her status changed from “in ordinary” to “full commission.” She then got underway in tow of Arapaho (AT-14) on 17 February, transferred to the tow of Kalmia (AT-23), she arrived the following day at the Submarine Base at New London. On 9 May 1922, L-11 was re-assigned to Submarine Division Two. Having departed from New London, L-11 stood in to the Portsmouth Navy Yard, Kittery, Maine, on 2 February 1923. Remaining there until 30 March, she sortied and returned to New London on 31 March. L-11 cleared New London on 20 August and proceeding south, arrived at the Submarine Base, Hampton Roads, on 22 August.

L-11 decommissioned at Hampton Roads on 28 November 1923. She was later towed in to the Philadelphia Navy Yard on 23 September 1924. She remained there through her being stricken from the Navy list on 18 December 1930 and subsequently being sold for scrap on 28 November 1933.