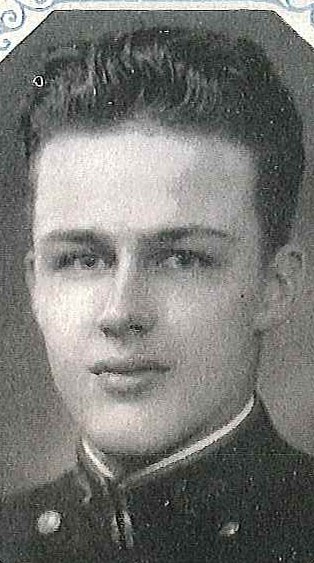 Reid Puryear Fiala was born in Brooklyn, New York, on January 14, 1909, son of Anthony and Mary Clare (Puryear) Fiala. He attended Manual Training High School in Brooklyn and William Leonard Preparatory School in New York, and entered the US Naval Academy on appointment from New York on July 19 1927. As a Midshipman he participated in Track and Cross Country, was Art Editor of the Academy “Log” and was a member of the Trident Literary Society. He was graduated with the degree of Bachelor of Science and commissioned Ensign in the US Navy on June 5, 1931, and through subsequent advancement attained the rank of Captain, to date from July 1, 1950.

After graduation from the Naval Academy in June 1931, he was assigned to USS Pennsylvania, and for two years served as junior officer on board that battleship, Flagship of that Commander in Chief, US Fleet. He had destroyer duty the next five years, serving successively in USS Chandler and USS Trever, units of Destroyers, Battle Force, the last two as Gunnery Officer of the Trever. In June 1938 he returned to the Naval Academy for a tour of duty as an instructor in the Department of Mathematics, and in June 1940 was ordered to USS Goldsborough, then out of commission in Philadelphia. That destroyer was reconverted to a small seaplane tender and commissioned as AVD-5 on July 12, 1940.

He continued service in the USS Goldsborough after the outbreak of World War II in December 1941, until the fall of 1943. While he was aboard she served as tender for Patrol Wing & in the North Atlantic, as a convoy escort in the Iceland Area, prior to the war, and after the Japanese attack on the Fleet at Pearl Harbor she was sent south, serving as a floating base for Patrol Wing 3, and operating around the Galapagos Islands, on the west coast of south America and in the Caribbean. Captain Fiala assumed command of the Goldsborough early in 1943 and served as her Commanding Officer when she escorted the large new seplane tender Albemarle from Norfolk, Virginia, to Recife, Brazil, and return in September of that year.

Transferred to command of USS Remey (DD-699), he participated in numerous operations in the Pacific during 1944 and 1945, after commissioning that destroyer on September 30, 1943. Under his command, the Remey took part in the occupation of Kwajalein and Majuro Atolls, the capture and occupation of Saipan, Tinian and Southern Palau Islands, the Leyte landings, Luzon attacks, Mindoro and Lingayen Gulf landings, the assault and occupation of Iwo Jima, and Fifth Fleet raids against Honshu and Nasei Shota, and in support of the Okinawa Gunto operations, and others.

He was awarded the Navy Cross and Bronze Star Medal for heroic service while serving as Commanding Officer of the USS Remey. The citations follow, in part:

Navy Cross: “For extraordinary heroism as Commanding Officer of the USS Remey in action against major units of the enemy Japanese Fleet during the Battle of Surgigo Striat, Philippine Islands, October 24 and 25, 1944.

“—Within United States Destroyer units deployed in a flanking maneuver as tactically disposed PT boats opened fire on a formidable column of Japanese battleships, cruiser and destroyers advancing under cover of darkness to wards our waiting forces, Commander Fiala placed the Remey in an advantageous striking position with close range of the enemy force. Although silhousetted by the illuminating glare of star shells and under fire, he launched his torpedoes with precise timing in the first sudden coordinated attack, surprised the enemy and rendered him vulnerable to the smashing blows of our heavy Naval units. Subsequently retiring without damage from the furious engagements which resulted in the sinking of two Japanese battleships and three destroyers before effective return fire could be brought to bear upon our Task Force, Commander Fiala, by his forceful leadership, professional ability and determination in the face of tremendous odds, contributed materially to the decisive defeat of the enemy force..”

Bronze Star Medal:  “ For heroic achievement as Commanding Officer of Close-in Fire Support Ship in action against enemy Japanese forces at Saipan Island on June 14-15, 1944. Operating under difficult navigational conditions and in the face of repeated heavy enemy gunfire, (he) skillfully maneuvered his ships through dangerous waters and effectively directed accurate, concentrated fire against hostile shore batteries, contributing essentially to the success of our forces in the accomplishment of a vital mission… (and) was a constant inspiration to the men under his command…”

Captain (then Commander) Fiala commissioned USS Harwood (DD-761) on September 28, 1945, and assumed command of that destroyer at San Pedro, California, and after her shakedown took her to China Sea- Yellow Sea area for occupation duty. He remained in command until the fall of 1945, when he returned to the Naval Academy for duty as an instructor, and later as Executive Officer in the Department of Mathematics. Detached in June 1949, he served as Commander Destroyer Division 602 for a year, then reported to Headquarters of the Commander in Chief, US Atlantic Fleet, for duty on the Staff.

On July 5, 1952, he was ordered detached for instruction at the Naval War College, Newport, Rhode Island, and upon graduation in June of the next year, he assumed command of USS Bottineau (APA-235). He completed that assignment in May 1954, then had a tour of duty at the Armed Forces Staff College, Norfolk, Virginia. On November 23, 1956, he was ordered to command Destroyer Squadron 15, and a year later detached to serve with Joint Staff of Commander in Chief, United Nations Command, and Commander US Forces, Korea.