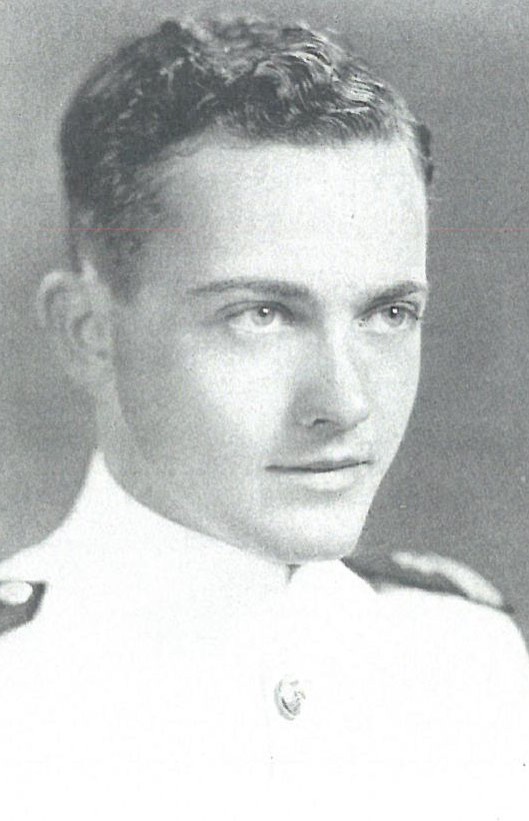 William Robert Anderson was born in Bakerville, Tennessee, on 17 June 1921, son of David H. and Mary M. Anderson. He attended Columbia (Tennessee) Military Academy before entering the US Naval Academy, Annapolis, Maryland, on appointment from his native state in July 1939. Graduated and commissioned Ensign on 19 June 1942, with the Class of 1943, he subsequently advanced to the rank of Captain, to date from 1 July 1960.

Upon graduation from the Naval Academy, he received instruction at the Submarine School, New London, Connecticut, and in September 1942 was designated a Submariner. From October 1942 to June 1943 he was assigned to USS Tarpon (SS 175) as Communications Officer and First Lieutenant, participating in three war patrols and receiving a Letter of Commendation with Ribbon and Combat "V." The citation follows in part:

"For meritorious conduct in the performance of his duties in the USS Tarpon during the Sixth War Patrol of that vessel in the Japanese waters from 10 January to 25 February 1943. As Battle Station Officer of the Deck, his skillful navigation of his ship materially assisted his Commanding Officer in conducting successful attacks which resulted in the sinking of 21,000 tons of enemy shipping..."

He next served for a year as Gunnery Officer and First Lieutenant of the submarine Narwhal which, during that time, made six war patrols. While serving in USS Trutta from July 1944 until August 1946 he was awarded the Bronze Star Medal with Combat "V." "For meritorious service as Engineer and Diving Officer...during the Second War Patrol of that vessel in the Yellow Sea from 28 May to 17 July 1945..." The citation further states: "(He) rendered invaluable assistance to his commanding officer in conducting successful attacks which resulted in the sinking of seventeen cargo-carrying small craft totaling over 4,000 tons and in the efficient rescue of a downed aviator..."

Transferring to USS Sarda in September 1946, after eleven World war II submarine war patrols, he was first Engineer and later Executive Officer of that vessel until August 1949, then returned to the United States to become Instructor in Naval Weapons and Fire Control with the Naval Reserve Officers' Training Corps Unit at the University of Idaho in Moscow. Following that duty he again went to sea in February 1951 as Executive Officer in the USS Trutta and in October 1951 was assigned in the same capacity to USS Tang. In May 1953 he became Commanding Officer of USS Wahoo which participated in action in the Korean theater from January to May 1954. From July 1955 to June 1956 he headed the Tactical Department at the US Navy Submarine School, New London, after which he served as Advisor to the Chief of the Naval Reactors Branch for Submarine Operating Matters, Atomic Energy Commission, Washington, DC.

On 30 April 1957 he was ordered to duty as Commanding Officer of USS Nautilus, the first atomic powered submarine and on 19 June 1957 relieved Captain Eugene P. Wilkinson, USN, first Commanding Officer of the Nautilus, during that submarine's visit to Seattle, Washington. The Nautilus made the first voyage in history from the Pacific Ocean to the Atlantic Ocean by way of the North Pole, accomplishing this feat by passing some four hundred feet under the ice at the Pole at 11:15 PM (EDT) on 3 August 1958. The officers and men of the Nautilus were awarded the Presidential Unit Citation and Captain Anderson was personally awarded the Legion of Merit presented by the President at the White House on 9 August 1958. The citation for the Legion of Merit follows:

"For exceptionally meritorious conduct in the performance of outstanding services while serving as Commanding Officer of the USS Nautilus (SSN-571)during the period 8 June to 5 August 1958. Commander Anderson, by foresighted planning, skilled seamanship and thorough study of the Arctic Area, succeeded in cruising Nautilus across the top of the world from the Bering Sea to the Greenland Sea, passing submerged beneath the geographic North Pole. Under his intrepid leadership, Nautilus pioneered a submerged sea lane between the Eastern and western Hemispheres. This points the way for further exploration and possible use of this route by nuclear powered cargo submarines as a new commercial seaway between the major oceans of the world..."

He also received a Letter of Commendation, with authorization to wear the Bronze Star in lieu of a Second Commendation Ribbon, from the Secretary of the Navy. The citation follows in part: "For outstanding performance of duty...during operations in Arctic waters from 19 August to 15 September 1957. Throughout this period, Commander Anderson exhibited unusual professional competence and leadership by taking his ship under the Arctic ice cap on three different sorties, one of which was for over 74 hours duration and covered 962.5 miles. Despite the hazards of submerged operations, he successfully directed his ship through previously unpenetrated Arctic waters to within 180 nautical miles of the North Pole, thereby accumulating much scientific and Arctic operational information..."

Detached from the Nautilus in August 1959, he was assigned to the Office of the Assistant Director for Naval Reactors, Division of Reactor Development, Atomic Energy Commission, Washington, DC. In April 1960 he was ordered to duty as Administrative Aide to the Secretary of the Navy and in April 1961 became Naval Aide to the Secretary of the Navy. He served as such until relieved of active duty pending his retirement, effective 1 July 1962.

In 1963 he was named Consultant to the late President John F Kennedy for the National Service Corps and in November 1964 was elected as a Member of the House of Representatives to the Eighty-Ninth Congress of the United States.