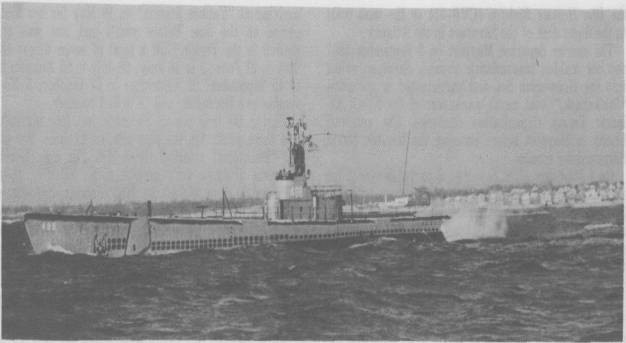 Caption: Sarda (SS-488) operating out of New London in 1956. She served out her career without undergoing modernization.

A game fish of the central, southwestern, and western Pacific.

During the period between launching and commissioning, Sarda, no longer needed for wartime service, was fitted out with an extra large conning tower to permit installation of experimental equipment. After commissioning, she conducted her shakedown cruise in the Caribbean, then returned north to commence experimental work out of New London, Connecticut. There she joined Submarine Division (SubDiv) 22 of Submarine Squadron 2; and, for the next four years, tested new equipment for the Underwater Sound Laboratory, Fort Trumbull, and evaluated new ship control procedures.

Transferred to SubDiv 21 in the autumn of 1949, Sarda was shifted from test and evaluation work to school ship duties. She continued that work through the 1950s, interrupting it only for type training; mine planting exercises; antisubmarine warfare (ASW) exercises; fleet exercises; occasional participation in North Atlantic Treaty Organization (NATO) or joint United States-Canadian exercises off the coasts of the Atlantic Provinces and northern New England; and, from January to June 1957, operations in the Caribbean and the Guiana and Brazilian basins for the Hydrographic Office. On her return, she resumed her primary function, training submarine school students.

In the early 1960s, Sarda continued that work, but devoted more time to providing services to ASW units conducting exercises. During the winter of 1960, she provided services to 92 surface ships and 14 air squadrons participating in annual training exercises in the Caribbean. During the winter of 1962, she again returned to the Caribbean for an extended stay and, when not employed in servicing Atlantic Fleet air and surface ASW units, she tested and evaluated acoustical torpedoes. The following winter, 1963, she deployed to the Mediterranean where she operated with the Sixth Fleet; and, on her return to New London in late May, she resumed school ship duties.

Eleven months later, Sarda was declared to be surplus to Navy needs. She spent May 1964 in port at New London preparing for inactivation, and on 1 June, Sarda was decommissioned and stricken from the Navy List simultaneously. Her hulk was sold for scrapping in March 1965.