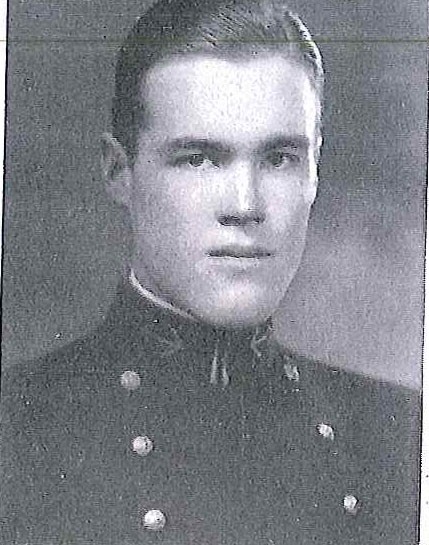 Walter Gale Ebert was born in Parkersburg, West Virginia, August 2, 1909, son of Mrs. Cara L. Ebert and the late J. Gale Ebert. He attended Parkersburg High School and Swavely School, Manassas, Virginia, where he was valedictorian of his class. he entered the United States Naval Academy, Annapolis, Maryland, by senatorial appointment from West Virginia in 1926. Graduated and commissioned Ensign on June 5, 1930, he advanced in grade until his promotion to Captain, to rank from November 15, 1945. Two years later he reverted to his permanent rank of Commander, but his selection for Captain’s rank was confirmed on April 21, 1949. He transferred to the Retired List of the Navy on August 1, 1950, when he was promoted to Rear Admiral on the basis of combat awards.

After graduation from the Naval Academy in June, 1930, he was assigned duty aboard USS Salt Lake City as Assistant Navigator, and in December, 1931 he was ordered to the Naval Air Station, Pensacola, Florida, for flight training. Designated Naval Aviator in January, 1933, he continued under instruction there until the following April. He then served as Pilot and Navigator of Training Squadron 2B, attached to USS Saratoga, operating at that time with Aircraft, Battle Force, until August, 1943.

From August, 1933 until May, 1934, he had sea duty as Communication Officer and Engineer of USS Noa, with Destroyer Squadron 1, Scouting Force, transferring to USS Wyoming as Turret and Division Officer until December, 1934. Reporting in January, 1935 at the Submarine Base, New London, Connecticut, he was under instruction and qualified for duty in submarines. At Coco Solo, Canal Zone, he went aboard USS S-13 in May, 1935 as her Engineer Officer, and two months before his detachment, he served as Commanding Officer. Transferring to New London, Connecticut, he had duty from October, 1936 to May, 1937 in USS S-20, flagship of Submarine Division 4, Submarine Force, US Fleet, and served as Torpedo and Communication Officer. During this period he commanded briefly USS Patriot, and was commended by the Chief of Naval Operations for “excellent seamanship, good judgement and efficiency in bringing USS Patriot safely through an extremely severe North Atlantic storm.”

Following duty in command of USS Eagle #56 (assigned to duty with U.S. Naval Reserve in Baltimore, Md.), from May 1937-1939, he was ordered to the Asiatic Station for duty in the S-37, later serving as Commanding Officer of that submarine, flagship of Submarine Division 10, until November, 1941, when he returned to the United States. He attended the Naval War College, Newport, Rhode Island, completing the command course in July, 1942. He then fitted out USS Scamp, and was her Commanding Officer from July, 1942 until February, 1944, during which time she made six successful war patrols in the Pacific war area. He was awarded the following decorations and citations

Silver Star Medal: “For conspicuous gallantry and intrepidity as Commanding Officer of USS Scamp. . . During the first and second war patrols of the Scamp, (he) distinguished himself by his “-brilliant tactical knowledge and sound judgement in maneuvering his vessel into advantageous striking positions so skillfully and aggressively as to destroy a valuable enemy converted merchant sea plane tender, and damage three other ships, despite persistent and violent hostile counter measures. Through his excellent direction of these operations he enabled the Scamp to complete her vital missions successfully without sustaining serious damage. . .”

Legion of Merit with Combat V: “For exceptionally meritorious conduct . . as Commanding Officer of USS Scamp during the third war patrol of that vessel in enemy-held waters of the Solomon-Bismarck Area. . . (he) succeeded in sinking a large Japanese submarine and in severely damaging a valuable enemy tanker. . . Despite vigorous anti-submarine measures employed by the enemy, he brought his ship through a series of perilous encounters without damage and his crew safely back to port. His superb seamanship contributed materially to the success of Allied operations in the Solomon Islands.”

NAVY CROSS: “For extraordinary heroism while serving as Commanding Officer of a United States Submarine during the vigorous fourth war patrol in enemy-controlled waters. Undeterred by frequent depth-bomb and gunfire attacks and the imminent danger of sinking, (he) . . . pressed home repeated attacks against the enemy, causing complete destruction of two valuable Japanese ships and the probable sinking of a third. Commander Ebert’s calm judgment in the face of danger, his inspiring leadership and courageous devotion to duty reflect great credit upon himself, his command and the United States Naval Service.”

Gold Star in lieu of Second Silver Medal: “. . .as Commanding Officer of USS Scamp in action against enemy Japanese forces during the Fifth War Patrol of that vessel in enemy-controlled waters of the Pacific Area from October 22 to November 26, 1943. . . to sink or damage approximately 20,500 tons of Japanese shipping, and in addition, completed an extremely hazardous special mission. . . He evaded all hostile counter-measures and returned his ship safe to port. . .”

Bronze Star Medal, with Combat V: “For meritorious achievement as Commanding Officer of USS Scamp during the Sixth War Patrol of that vessel in enemy-controlled waters of the Pacific Area from December 16, 1943 to February 6, 1944. . . (He) successfully penetrated hostile escort screens to launch bold torpedo attacks which resulted in the sinking of a valuable 10,000 ton Japanese tanker. . .”

From April to June, 1944, he was assigned as Commanding Officer of USS Kraken during her fitting our period, and in June was ordered to duty on the staff of Commander, US Naval Group, China, as Fleet and Submarine Liaison Officer in the China-Burma-India theater. Returning home, he reported in May, 1945 to the Naval Academy for duty on the staff in connection with setting up a post-war Leadership Course. He served in that capacity until October, 1947.

Returning to duty at sea in December, 1947, he assumed command of Submarine Division 22, aboard USS Piper, flagship, and in January 1949 he was relieved for duty on the staff of Commander Submarine, Atlantic Fleet. He was so serving when relieved of active duty pending his voluntary retirement from the Naval Service, effective August 1, 1950.