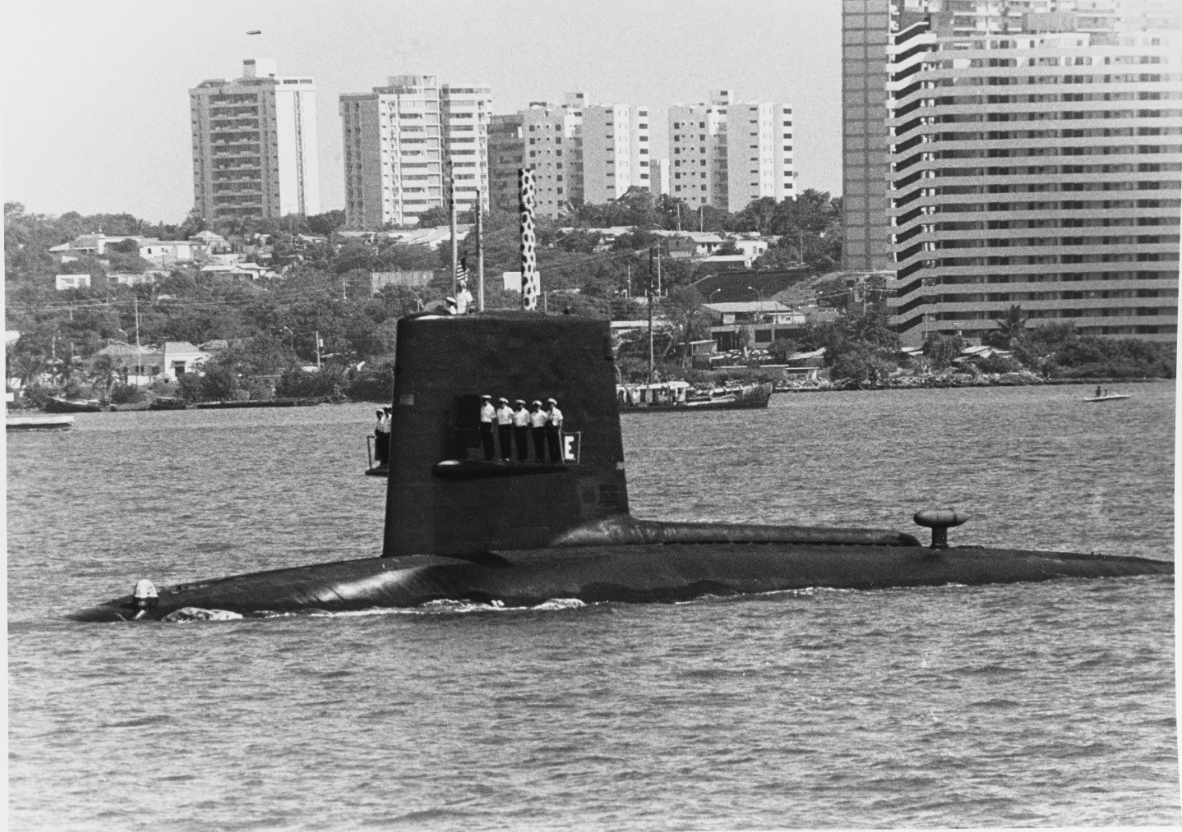 A fish, a member of the serranidae family.

The second Scamp, a nuclear submarine, was laid down on 23 January 1959 at Mare Island Naval Shipyard, San Francisco, Calif.; launched on 8 October 1960; sponsored by Mrs. John C. Hollingsworth, widow of Comdr. John C. Hollingsworth, the commanding officer of Scamp (SS-277) at the time of her loss in November of 1944; and commissioned at Mare Island on 5 June 1961, Comdr. W. N. Dietzen in command.

Scamp's first four months in the fleet were taken up by advanced trials and training exercises in the Bremerton, Wash.; San Diego, Calif.; and Pearl Harbor, Hawaii, areas. Following these operations, she returned to Vallejo for post-shakedown availability at Mare Island Naval Shipyard. Leaving the shipyard, Scamp completed her final acceptance trials and began local operations in the San Diego area. In April 1962, she deployed to the western Pacific, returning to San Diego in July. She operated locally until September, when she departed on another extended training cruise. Scamp returned to San Diego and local operations until February of 1963 when she entered Mare Island Naval Shipyard for interim drydocking. She refloated in March and, in April, deployed again to the western Pacific. While in the Far East, she conducted another extended period of advanced training, including operations in the Okinawa area. Scamp reentered San Diego Bay in October 1963. She resumed her west coast operations out of San Diego until June 1964; then, she headed west again for advanced readiness training. She arrived back in San Diego in September 1964.

Scamp entered Mare Island Naval Shipyard again in January 1965 for extensive modification. In June 1966, after the installation of the SUBSAFE package and overhaul, she left Mare Island and returned to training cruises in the San Diego operating area. In November, she ventured north to Puget Sound for a month of operations and returned to San Diego in December. The nuclear submarine operated out of San Diego for the first six months of 1967. On 28 June, she departed San Diego to join the 7th Fleet in the western Pacific. She remained in the Far East, participating in fleet operations along the Vietnamese coast, until returning to San Diego on 28 December 1967.

Scamp operated out of San Diego in the local operating area from January to May 1968. On 11 May, she arrived at Pearl Harbor to conclude an extended training cruise. She returned to San Diego on the 19th and remained there until 15 June, when the submarine shifted to San Francisco to enter Mare Island Naval Shipyard for a three-week restricted availability. She returned to San Diego on 16 July and finished out the year sailing from that port on various exercises and training cruises.

Scamp continued stateside duty throughout 1969. She alternated in-port periods with training cruises until early March when she began pre-overhaul tests in the San Diego operating area. She continued preparing for overhaul and participating in exercises until 1 November when she entered Puget Sound Naval Shipyard for regular overhaul. While at Bremerton, Scamp was assigned that port as her new home port. The overhaul continued through 1970 and ended in January 1971.

Following post-overhaul sea trials in Puget Sound, Scamp was reassigned back to San Diego, as home port, on 12 February 1971; but did not enter that port until 16 April after a voyage to Pearl Harbor. On 27 July, she deployed to the western Pacific. Scamp stopped at Pearl Harbor from 2 to 13 August, then headed on to Subic Bay, R.P., arriving on the 30th. For the bulk of 1971, she operated with the 7th Fleet in Far Eastern waters other than off the coast of Vietnam, except for one short two-day period, 8 and 9 October.

She returned to San Diego on 2 February 1972, but, due to increasing tension in Southeast Asia, redeployed to the 7th Fleet in May. She operated in the South China Sea for most of the summer, returning to San Diego on 1 August. Upon arrival, she went into a two-month standdown period, followed by more than a month of restricted availability at Puget Sound Naval Shipyard. She departed Puget Sound on 28 November, conducted weapons system accuracy tests, and returned, on 11 December, to San Diego, where she remained for the remainder of the year.

Scamp operated locally around San Diego until 29 March 1973. At that time, she departed the west coast for deployment to the Far East. She stayed at Pearl Harbor between 5 and 10 April, then headed for Yokosuka, Japan. She arrived in Japan on 23 April and operated with the 7th Fleet until 1 September, when she departed Guam for Pearl Harbor. Scamp stopped at Pearl Harbor during the period 10 to 15 September, then set sail for San Diego. Arriving on 21 September, the nuclear submarine immediately entered a period of standdown and upkeep until 1 November, when she resumed operations in the vicinity of San Diego. She has continued this employment into June 1974.